One of the few original, well-preserved gablefront tenement houses from the transitional period between the Gothic and Renaissance era in Western Pomerania, forming part of the market square frontage in the town of Trzebiatów.

The town of Trzebiatów was originally chartered according to Lübeck law in 1277 by Barnim I, the duke of Pomerania. Shortly thereafter, the street grid was drawn up, centred around a square-shaped market place in the middle. Different plots of land were also designated so that the construction of new houses could begin. Lot no. 27, located along the Market Square, is one of those original, medieval parcels of land. The first masonry townhouse may have been constructed here shortly afterwards. Based on the architectural studies conducted in the 1970s, it has been possible to determine the relative chronology of this structure. The first, Gothic phase of its construction is believed to have taken place during the second half of the 14th century. It is from that period that the basement peripheral walls originate, with the basement level originally featuring a beamed ceiling. Both the small basement windows in the front wall and the remnants of the opening through which various goods could be carried into the basement from the outside have survived to the present day, the latter having later been replaced by the elongated cellar entrance section (the so-called “cellar neck” - Kellerhals). The western wall shared with the neighbouring tenement house as well as the rear wall up to the level of the first floor are likewise believed to originate from the first phase of the building’s construction. During the second, Late Gothic phase which took place in the first half of the 16th century or during the middle of the same, the basement received a double vaulted ceiling of the barrel type; the western wall shared with the townhouse next door was also erected, as was the front wall up to the level of the first floor. The archivolt main entrance portal also dates back to the period in question, as does the rear façade gable and perhaps also the front gable. Inside, the ground floor and first floor ceilings were both moved upwards to create more interior space, while the ground-floor vestibule now boasted a mezzanine positioned alongside the eastern wall thereof. During the third, Late Renaissance construction phase, believed to have taken place in the late 16th and early 17th century, the front façade of the townhouse underwent a comprehensive redesign. Although the Late Gothic portal was suffered to remain, the ground floor and first floor window openings were all remodelled, as was the front gable, which may perhaps even been dismantled and reconstructed from scratch. The fourth, Baroque phase took place in the late 17th or early 18th century; during this phase, the tenement house was most likely reconstructed following the great fire which engulfed the town in 1679, with traces of the conflagration still readily apparent inside the arched opening in the side walls which have subsequently been bricked up. The works performed during that phase involved the modification of the ground floor ceiling structure, which was moved downwards this time, as well as the adaptation of the first-floor rooms to serve as a residential space. New, half-timbered partition walls were constructed both on the ground floor and on the first floor, while on the ground floor there was now a kitchen, all the smoke and fumes produced therein now routed through a new chimney. The roof truss was constructed from scratch, while certain elements of the front façade design were modified once again. The window recesses in the front façade were now gone, while the windows themselves were redesigned, with eared plaster surrounds now accentuating the shape thereof. The main entrance was now smaller than it had been before the redesign. It is suspected that it was only at that point that the new gable partitions and decoration were added. The rather austere stucco detailing of the front façade in the form of foliate festoons was added at an unspecified period between the 18th and the 19th century. The final phase took place in the late 19th century or the early 20th century. During that period, some minor adjustments were made to the interior layout, the window joinery was replaced and the ground floor windows were enlarged. The ground floor level itself is known to have been adapted to serve as an eatery towards the end of the 19th century, with all of the interior partition walls being torn down for this purpose. The facilities which accompanied the restaurant were located in the now-vanished back building. After World War II came to an end, the ground floor section served as a storage facility of the furniture store located in the building next door (no. 26) until the year 1971, with the first floor and the attic being occupied by a local farmer. Based on the architectural analysis conducted in 1973 by the architect Stefan Kwilecki from the Szczecin Branch of a state enterprise known as the Monuments Conservation Workshop (PP PKZ), a set of guidelines was prepared in 1974 by Róża Kąsinowska, M.Sc.; a year later, a plan for the revitalisation of the townhouse was drawn up by Władysław Jankiewicz, Engineer of Architecture, with the interior design prepared by Wilhelmina Nesterowicz. Based on this documentation, in the years 1976-1978 a comprehensive restoration of the building was carried out which also involved the partial reconstruction of its Late Renaissance appearance. Once completely restored, the building was to serve as the local Tourist Information Centre. The back building was demolished, while the attic was converted, with a pair of dormer windows rising from the eastern side of the roof added on the side of the building which faced the back yard. The basement now served as a small café, while the ground floor now contained a magazine and newspaper reading room and an eatery. Visitors could also take advantage of a number of first-floor guest rooms. After 1989, the tourist centre was closed down and replaced by a café, which remained in operation until the second half of the 1990s. Today, the ground floor premises are occupied by a pizzeria, with the upper storeys performing a residential function.

Tenement house no. 27 forms part of the south-western frontage of the Market Square in Trzebiatów. The building’s front façade faces the north-west. Behind the townhouse lies the yard shared by all the buildings forming part of this quarter. The two-storey gablefront tenement house was designed on a roughly rectangular floor plan, its shorter sides facing the market square and the yard behind the building. The tenement house features a basement underneath the front part of its structure and a tall ground floor section. It is covered with a gable roof. The back building which had once accompanied the main townhouse was demolished in the 1970s. A large, three-storey tenement house from ca. 1910 adjoins the western wall of the townhouse, occupying a large parcel of land at the street corner. The building is a brick structure, its walls covered with plaster. The roofs are clad with beaver-tail roof tiles. The basement level features surviving original vaulted ceilings of the barrel type, with modern reinforced concrete ceilings used for all the other storeys of the building. The ground floor section of the front façade follows a three-storey layout with an entrance portal in the centre; the first-floor level follows a four-axial layout and is graced by a Baroque gable, divided by cornices positioned at the level of the first-floor window sills as well as at the base of the gable and within the gable itself. The main portal, dating back to the Late Gothic period, features brick archivolt reveals and is topped with a basket-handle arch. Inside the portal there is a new, stylised doorway with a transom light incorporating decorative wrought-iron grillwork. On the left (eastern) side of the portal one can see the preserved original basement entrance, topped with a segmental arch with a Late Gothic brick roll-moulding. The basement window topped with a segmental arch is positioned on the western side of the portal. Both of the basement openings are now protected by wrought-iron grillwork installed during the most recent reconstruction works. The windows of the tenement house are positioned inside recesses topped with segmental arches; the ground-floor recesses are much taller than those of the first-floor level, with the gable incorporating a trio of relatively small, low openings - two in the lower portion of the gable and one in the upper section thereof. The gable itself is partitioned with two cornices; the ornamental coping of the front façade gable consists of several sections following a semi-circular outline, with rather restrained foliate ornamentation at the edges. The entire arrangement is crowned with a finial in the form of a low, squat obelisk. The gable is topped with a small, semi-circular pediment, with the flowing coping on its sides designed to recreate the shape of the now-vanished volutes. The rear façade follows a three-axial layout, its windows topped with segmental arches. The tall ground floor windows are in stark contrast with the much lower windows on the first-floor level. The back entrance into the building is positioned on the first axis from the west. The Late Gothic gable is an exposed brick structure partitioned by six blind windows the middle two of which are topped with round arches, while the others feature half-arched top sections. Small, rectangular window openings are positioned within both of the middle blind windows, with a small, rectangular blind window positioned higher up the gable, between the arches. Inside, the front section of the townhouse features two basement chambers with vaulted ceilings of the barrel type, supported by arches; access from one chamber to another is facilitated by a dedicated passage. The ground floor and the first floor follow a two-bay and three-bay layout respectively, with the current arrangement of the rooms being the result of the renovation works conducted in the 1970s. The attic harbours a pair of rooms which serve a residential purpose. Both of the shared side walls are partitioned with recesses topped with segmental arches, their depth equivalent to the width of a single brick; these structures have originally served as supports for the earlier wooden beamed ceilings.

The building can be viewed from the outside. The interiors are devoid of period features with the exception of the basement level; they can be explored upon arrangement with the residents of the building.

compiled by Maciej Słomiński, Regional Branch of the National Heritage Board of Poland in Szczecin, 22-05-2015. 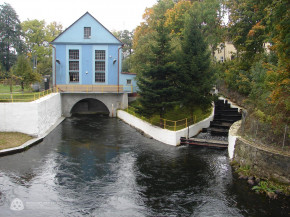 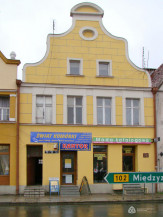 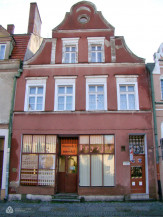 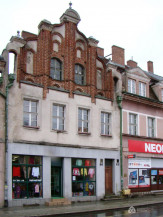 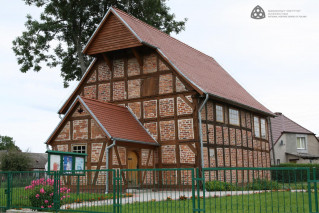 Evangelical church, currently the Roman Catholic filial Church of the Annunciation to the Blessed Virgin Mary 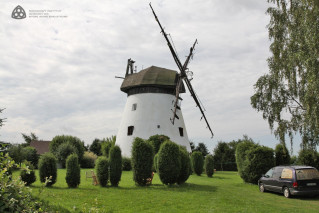 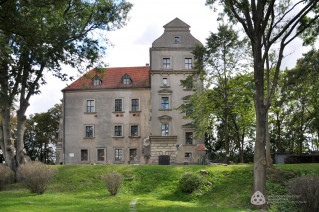 The Old Castle, originally built as the manor house of the Osten and Blücher families, currently serving as the municipal library 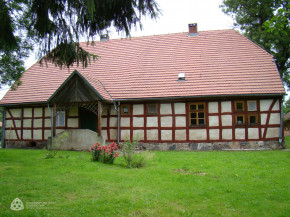 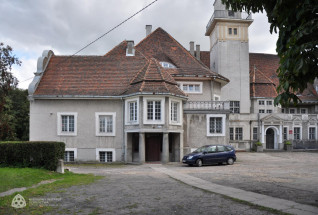