Parish Church of the Exaltation of the Holy Cross - Zabytek.pl

The church of the Exaltation of the Holy Cross presents an immense artistic, architectural and landscape value and forms a notable example of wooden ecclesiastical architecture of the Upper Silesia region, being one of the oldest surviving structures of its kind.

The church also features valuable interior décor in the form of Renaissance and Baroque painted decorations as well as numerous period fixtures and fittings. In addition, the location of the church, perched atop a hillock and surrounded by a numerous ancient trees, is reminiscent of rural traditions and spatial arrangements which manifested themselves in the form of the so-called “sacred groves”, whereby a church surrounded by dense vegetation would tower majestically above the rest of the village.

The first recorded mentions of the church in Stara Wieś date back to the years 1325-7. The existing parish church of the Exaltation of the Holy Cross was erected on the site of an even older church, founded by Krzysztof Biberstein-Starowiejski in 1522. Eight years later, the church was consecrated by Dominik, the bishop of Cracow. The first major renovation works took place in 1787.

During the period in question, the church attained its Baroque appearance and décor, receiving a new turret crowned with a bulbous cupola above the nave as well as decorative pilasters and crowning cornices adorning its walls. In 1926, the church underwent alteration works which included the extension of the nave, which now also encompassed the space beneath the tower. The two spaces were linked together by a broad arched aperture designed by Zygmunt Gawlik. The roof received a new fibre cement cladding. In years 2000-2001, the entire building underwent a comprehensive restoration, with the roof cladding being replaced once again, this time with wood shingles. In 2011, a detailed dendrochronological analysis of the church was performed, allowing researchers to determine that the chancel, the nave and the tower all originate from the very same period (1522). The most recent works, performed in the years 2009-2013, involved the consecration of the painted decorations gracing the walls and the ceilings as well as the renovation of the fixtures and fittings, including the main altarpiece, the rood beam surmounted by the sculpture of Our Lady of Sorrows as well as the wooden baptismal font graced by the group of sculptures depicting the Baptism of Christ.

Open page of the object in new tab

The church of the Exaltation of the Holy Cross is situated in the central part of Stara Wieś, on a hill located in the north-western part of the church cemetery, designed on an oval plan.

The church is surrounded by a wooden fence and accompanied by valuable specimens of old trees (mostly lime trees) - a reference to the so-called sacred groves.

The Late Gothic church, oriented towards the east, is a single-nave structure made of wooden logs, covered with a gable roof and accompanied by a post-and-beam tower with a pronounced, overhanging bell chamber as well as by cloister-like walkways following the course of the walls, traditionally referred to as the soboty, which have been partially converted into enclosed structures.

The church features a pair of porches adjoining the western and the southern façades. The silhouette of the church consists of the post-and-beam tower, adjoined by a small porch to the west and abutting on the nave, designed on a roughly square plan, as well as a narrower chancel with a semi-hexagonal end section, adjoined by a small sacristy to the north. The tower is crowned with a decorative, bulbous cupola with a roof lantern, with a similar design also used for the openwork steeple jutting from the eastern edge of the nave roof. In addition, the church also features Late Gothic wooden detailing as well as Baroque fixtures and fittings. The interior is adorned with sumptuous painted decorations which grace the walls of the nave, the chancel as well as the flat ceilings of the church. The dominant themes are geometric and foliate decorations as well as images of various saints. Notable items include the Late Gothic painting of the Crucifixion from the 16th century, painted on board, as well as the Early Baroque main altarpiece from the 18th century, incorporating the painting of the Virgin Mary with Child, St Catherine and St Barbara and two 18th-century side altarpieces adorned with images of St Joseph and Our Lady of the Rosary. The Rococo baptismal font and pulpit also deserve a special mention.

The building can be viewed from the outside. The interiors may be explored by prior appointment with the parish chancellery.

compiled by Agata Mucha, Regional Branch of the National Heritage Board of Poland in Katowice, 03-02-2015. 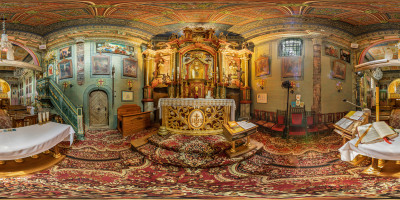 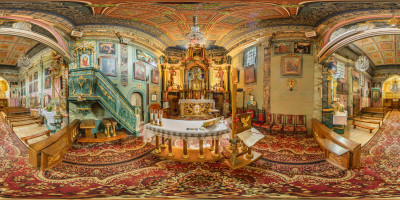 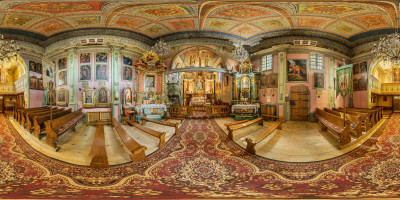 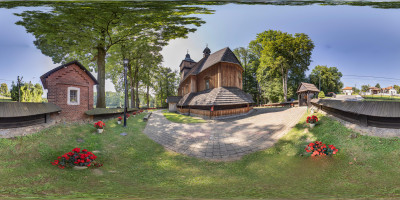 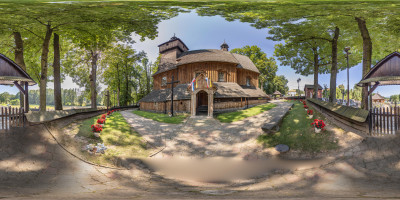 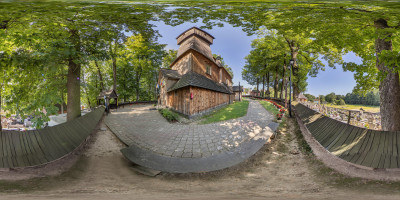 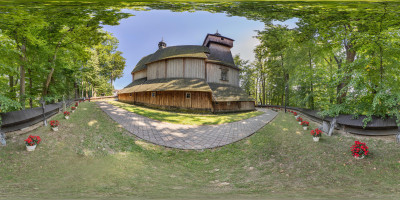 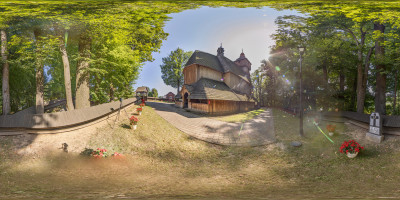