The location of the Church of St Roch on a hill separated from a compact cluster of buildings and its original architecture makes it an architectural landmark of Białystok. It is also an important element of the urban landscape, a valuable reminder of the history of the capital city of Podlasie and a historic votive offering.

Located on the edge of downtown, in the 18th century the hill of St Roch was an element of the residential complex of Jan Klemens Branicki, often called the Versailles of Podlasie. It was the end of the alley lined with lime trees leading from the town and the palace, a distinctive ending of the view corridor. It also make it possible to contemplate the panorama of the town. In the 1740s, a brick chapel of St Roch was built here using the funds probably provided by Jan Ksawery Branicki and served as a place of popular festivals held on a feast day of its saint patron. At the beginning of the 19th century, a Catholic cemetery was established on a hill located in the Choroskie Suburb, in the fork of two suburban roads, and the chapel assumed the function of a burial chapel. The cemetery of St Roch was one of the places that suffered repressions after the outbreak of the January Uprising. In 1864, Russian soldiers desecrated the necropolis, destroying and damaging several hundred graves. The cemetery operated until the 1880s, when it was closed due to the town growing around it, new buildings along the streets connecting the centre with the Saint Petersburg–Warsaw Railway station and sanitary regulations.

The growing Catholic community of Białystok needed a new church. As early as the 1890s, it was decided that a new church would be erected on the hill of St Roch. The initiative did not gain the approval of the tsarist authorities, and it was not implemented until in the independent Republic of Poland. The first parish priest of the Roman Catholic parish of St Roch, created in 1925, was Rev. Adam Abramowicz, valued for successful church investments in Dziarečyn, Goniądz and Uhowo. Soon, the Church Building Committee was formed, made up of members of the authorities and the then Białystok elite, and fundraising began. In the same year, exhumations were carried out on the closed cemetery to transfer the remains to the necropolis in the Wysoki Stoczek district. The 18th-century chapel was demolished and a wooden chapel was erected in its place, enabling the temporary celebration of the Eucharist. In 1926, with the participation of the Warsaw Circle of Architects, an open architectural competition was announced for the „Construction of the Church of Divine Providence in Białystok for 3,000 people”. The jury awarded five works out of 76 submissions.

The final choice was made by Rev. Adam Abramowicz. He did not use the competition projects but the design by Oskar Sosnowski, a renowned architect, professor at the Warsaw University of Technology, with whom he had previously worked on the construction of a church in Goniądz.  The Bialystok church was to initiate a project promoted for many years by, among others, that architect, i.e. the erection of a complex of churches in Poland referring to the Litany of the Blessed Virgin Mary and bearing dedications referring to the titles of the litany and belonging to the Mother of Christ. Father Abramowicz supported this idea and the church itself (according to the assumption, the Church of Our Lady Queen of the Polish Crown – the „Morning Star” from the Litany of Loreto) was to be a votive offering of the inhabitants of Bialystok for the gift of regaining independence after over century of captivity and for the victory in the Polish-Bolshevik War of 1920.

Construction began in 1927 and lasted, thanks to the stubbornness and organisational talent of Rev. Abramowicz, until the consecration of the church in 1946, despite the economic crisis of the 1930s, constant problems with investment financing, the outbreak of World War II and dramatic experiences of the two occupations, as well as the changes that took place in Poland after 1945. Work on the finishing and furnishing of the church was continued in 1963–1966. During the consecration in 1946, the church was called the Church of Christ the King, in 1967 the dedication was extended by the patronage of St Roch.

On the hill there are two courtyards of varying shape and size at different heights. The entire complex is surrounded by a brick fence, partly made of stone, supported by pronounced buttresses with corner gate pavilions and a massive body of the main entrance on the axis of the street leading from the church to the town centre. Referring to the fortress fortifications, it adds character to the whole structure of the fortified is made of a two-wing, multi-storey building, used as a clergy house and an old shelter for the poor, crowned with an attic. The lower (pilgrimage) courtyard was surrounded by arcaded cloisters. The church with a 78-metre-tall tower is located in the centre of the upper courtyard.

St Roch’s Church complex is a unique example of a modernist sacred layout. Inspirations from expressionism, art deco and monumental forms, fascination with the crystal structure and the use of glass in architecture are visible in the architecture of the building. Modern engineering solutions (reinforced concrete structure and interior elements) characteristic for Polish and European art of the 1920s and 1930s are combined here with the solutions drawn by the architect from historical architecture, from Gothic to Baroque, individually interpreted and applied. Białystok’s performance is the sum of Oskar Sosnowski’s experiments and artistic explorations and his most important work.

The characteristic form of the church’s body, a multi-layer structure based on the octagon-star plan, is composed of a system of cubic solids of various sizes and heights, different finials and variously shaped facades. The structure of the building, vault and the dome were made of reinforced concrete, the walls were bricked. The central octagonal aisle is covered by a dome topped with a high octagonal attic, towering over annexes and pavilions adjacent to the nave. It is surrounded by seven spacious, regularly distributed and projecting pavilions covering the chancel, chapels and vestibules of entrances, also topped with a common attic. The spaces between them were closed with walls, forming shallow low annexes, covered with roofs. The next pavilion, which houses the sacristy, is the base of the tower, which is square in shape in the lower parts and octagonal and openwork in the upper parts, with the statue of the Mother of God placed at the top. In the lower part there is an outer altar topped with an attic, open to the lower courtyard.

The interior of the church impresses with its form, lightness and spaciousness. The octagonal nave is surrounded by a row of slender octagonal pillars of high arcades, forming an ambulatory and supporting a glass dome. A balcony of a music choir was located above a part of the gallery and inside one of the pavilions, open to the nave reaching the vault with an arcade, there is a presbytery with the main altar.

Rich architectural details and ornaments adorn the interior and facades: various forms of windows and portals, numerous ornamented panels and recesses, nave arcades, galleries and chapels with openings of various shapes and sizes, muntins in the arcades of the tower, statues of saints in the finials of the nave pillars, and stained glass windows, and domes. In addition, attention is drawn by decorative grilles closing the chapels, especially the crystal vault of the sacristy and ornaments with a star motif in the dome above the nave, on the vaults of the gallery and chapels, filling also the attics over the church and the rectory, window frames and friezes at the gate pavilions.

The architecture and stylistics of the church decorations harmonise with its sculptural decoration and furnishings, having a uniform style. Stanisław Horno-Popławski is the creator of the statute of the Good Shepherd placed above the main entrance to the complex, the statue of Christ the King in the main altar and the Mother of God in the external altar. A rich and homogeneous complex of altars made of natural wood, pulpit, bishop’s throne, baptismal font, confessionals and benches are works (partly made according to designs by Oskar Sosnowski) by artists valued in Bialystok: Stanisław Bukowski, Irena Pławska and Aleksander Wels. Stained glass in the glazing of the dome was designed by Placyda Siedlecka-Bukowska.

Many years of efforts resulted in the erection of an exquisite monument – a votive offering of the capital of Podlasie for the regained independence and victory in the Polish-Bolshevik War of 1920, and – in terms of architectural form – one of the most characteristic churches of interwar Poland. The high artistic value of the work, the clear combination of modernity and the use of tradition, symbolic wealth and historical values contained in the genesis and history of the church make it a monument of special class. 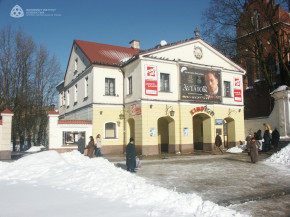 House in the Old Town district, formerly serving as a hospital 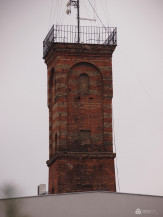 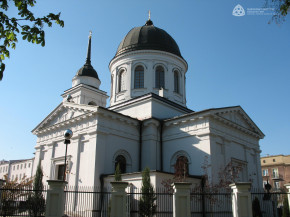 The cathedral of St Nicholas the Wonderworker 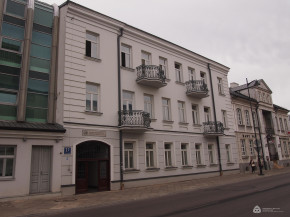 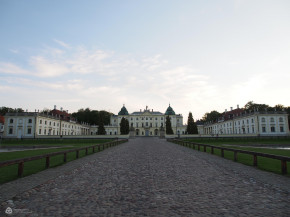