A vast landscape composition comprising the area on both sides of the river with a ducal residence, hospital complex and church of the Holy Cross, related in landscape terms with town architecture, regarded in the 19th century as one of the most beautiful parks in Germany and famous for sumptuous floral décor.

In 1628, on the relics of a Piast castle from the end of the 13th century, Albrecht von Wallenstein initiated the construction of a residence. In the same period, a hunting park was created on the south. The construction of the palace was continued from 1674 by duke Veceslaus von Lobkovic and his son Ferdinand August, who erected a three-wing residence and created a French garden. In the times of Duke of Courland Peter von Biron (1786-1800), the palace garden was extended to the west, a pheasantry was created, as well as a spectacular square at the main driveway; earthen fortifications were partially liquidated and a gardener's house, later cavalier house, was built. In 1790s, an orangery was built, and after the death of Biron, in the period of 1800-1804, by a branch of the Bóbr river, within the area of the later upper park a mausoleum of the duke and a janitor's house (after 1801) were built - all of them according to a design by Ch. V. Schultze. During the times of duchess Dorotheé Talleyrand, in the years 1844-1862, the garden was extended to include the areas to the east from the palace and the strip of land along the branch of the Bóbr river. The area of the former hospital, adjoining the complex from the south, and the church of the Holy Cross, were also bought. Under the direction of royal gardener F. Teichert an extensive landscape complex was created, crossed by the Bóbr river and its branch, and comprised of a palace (floral) garden, middle park (Pheasantry), and upper park (Kammerau). In 1847, a platform with an orangery was built, and in 1848 - a new green house, called later Palm House; in 1852, by a carp pond, the Island of Mary was created; in 1853, a Dutch Garden with bulbs; in 1850, between the middle and the upper park, a Bridge of Dorota (later Royal Bridge) was built, by which, in 1853, a Votive Cross was set. In the years 1862-1898, under the rule of Ludwik Napoleon de Talleyrand, a water supply system was installed, and the park was equipped in fountains and sculptures. In the place of the Dutch Garden, a terrace garden, called the Garden of Ludwik, was arranged, and in the moat - a rockery. In 1864, the palace garden, and then the rest of the park, were made available for visitors. After 1945, the palace and the park was devastated, the orangery and the green house were dismantled, and most of the sculptures were destroyed. In the years 1965-1983, the palace underwent renovation.

The park is located in the south-eastern part of Żagań, on the southern side of the palace which faces Szprotawskiej Street with its front façade. The extensive landscape complex covers an area of more than 97.5 ha, divided by the Bóbr river and its branch into three parts: Palace Park, Pheasantry on an island, and Upper Park, stretching on the other side of the river. The palace park was distinguished by a sumptuous architectural programme, water structures and architectural and sculpture decorations, as well as foliate composition based first of all on seasonal flowers and green house plants. Currently, it lacks floral decorations. The main access road to the palace runs from the north, with a gatekeeper house (1845) by it and a café next to the house. On the southern side of the residence, there is an orangery with platforms (1847), and by the pond, an eclectic Fisherman's House (1847, redesigned in 1880), and a granary (1) - currently "Młynówka" guest house; at the Ludwik's Bridge, there is a Modernist water plant (1924); across Żelazna Street - a neo-Gothic hospital complex comprising Hospital of Dorota (years 1851-1859), Vicar's House (1851), house of nuns, so called Mary's House (1906), Loreto chapel (early 20th century), utility building (early 20th century), and a gatekeeper's house (1st quarter of the 20th century), as well as church of the Holy Cross (regothicised in 1849) - the place of burial of the representatives of the ducal family. In front of the entrance to the hospital premises, there is a gatekeeper's house in Swiss style (1848), currently the seat of the Tourist Association "Piechur". In the park, there are surviving fountains from the 2nd half of the 19th century and two sculptures of Nike in front of the façade of the palace. In the Palace Park and the Pheasantry, there are glades (e.g. Dorota's Pastures, Wilhelmina's Meadow), with solitary trees and tree groups here and there; the Upper Park has maintained its character of a tight forest complex. At observation points and rest sites, there are erratic rocks with inscriptions. The main view corridor, leading from the palace to the south-west, through a clearing at the Pheasantry to the observation point on the Hill of St Peter, has remained legible. In the complex, there are historical specimens of London planetree, pedunculate oaks, common beeches, European yews, northern white-cedars, as well as black pine-trees and common beech of purple variety.

The park is accessible all year round.

compiled by Anna Jackiewicz, Regional Branch of the National Heritage Board of Poland in Zielona Góra, 18-06-2014. 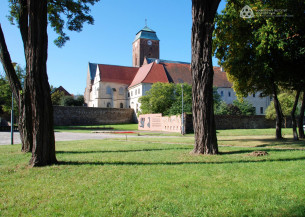 Church of the Holy Cross