The monastery complex in Woźniki is one of the most valuable Baroque historical sites of Greater Poland. The church of St Francis erected for Reformers is an interesting example of a modest one-nave monastery church. The design was created by a famous architect operating in Greater Poland in the last quarter of the 17th century and the first quarter of the 18th century - Giovanni Catenazzi from Morbio in Switzerland. Inside, uniform Late Baroque fittings have been preserved, made by monastery woodcarvers Tomasz Mielnarski and Adam Sikorowski. The sculptures in the main altar were made by Silesian sculptor Antoni Shultz from Rawicz. From the south, the church is adjoined by the remains of the monastery, erected according to a design by architect Jan Adam Stier.

In the 13th century, Woźniki was a subsidiary settlement to one of the nearby castellan gords in Drożyn or Modrze. The oldest mention of the chapel of St Francis nearby the village dates back to 1393; further ones - to 1473 and 1595. In 1660, with a founding act, the then village owner, Maciej Kazimierz Łodzia Rogaliński, donated the wooden church which he had built and the monastery to the Order of Reformers from Silesia. The person who influenced the foundation decision was probably Rogaliński’s wife - Anna Mielżyńska. On 3 June 1663, the church was consecrated by bishop Wojciech Tolibowski.

In 1683, Woźniki was sold to the Castellan of Śrem, Maciej Mielżyński. In 1706, the construction of a new, brick and stone church began. The construction was initiated by M. Mielżyński (who died in 1697) and his wife Katarzyna. On 11 November that year, the old buildings caught fire and the walls of the newly erected church were partially destroyed. The construction was finished by the son of M. Mielżyński - Franciszek Walenty and his wife Krystyna née Skaławska. The design was created by a famous architect Giovanni Catenazzi. The works were carried out by monk Mateusz Osiecki. In 1723, the construction was terminated. At that time, the old wooden monastery was in danger of collapsing. In 1727, the construction of a new monastery building began. It was financed by Michał Raczyński, Castellan of Kalisz. The design was created by Jan Adam Stier. The works were completed in 1741. A garden was established near the buildings. In the years 1750-59, the monastery area was enclosed with a high wall. In 1767, a stone statue of the Blessed Virgin Mary was placed in front of the church. The church was consecrated by bishop Władysław Wierusz Walknowski on 17 July 1774. By 1775, the church was equipped with uniform oak fittings - the main altar, 6 side altars and a pulpit, among others. They were made by monastery carpenters Tomasz Mielnarski and Adam Sikorski. The altar sculptures were probably made by sculptor Antoni Schultz from Rawicz. The authors of the paintings were local monks.

In 1836, the monastery was disbanded by the Prussian authorities. The then heirs to Woźniki - Maciej and Konstancja Mielżyński - became the owners of the monastery buildings in 1842. At first, the monastery was home to a retiree centre; later - to a school. Eventually, in 1850, the dilapidated buildings were demolished. Only a part of the eastern wing, lowered by one storey, remained. Also utility buildings and the monastery wall were dismantled. The church served as a private chapel; a family tomb was established in the basements.

In 1926, the church authorities considered the church a ruin and religious worship was forbidden here. In 1933, the Voivodeship Office in Poznań issued a conservation decision deeming the site a historical monument. During the World War II, the church served as a warehouse. After the war, the Woźniki estate went into the hands of the state treasury and was subdivided into parcels. The church along with the remaining parts of the monastery were used as a warehouse and flats by the Konstantynowo Forest District. The main altar was donated to the church of Discalced Carmelites in Poznań; the remaining fittings - to the parish church in Buk and other churches.

In the years 1957-59, protection works were conducted, but the building was still gradually decaying. Only in 1975, Canon Hieronim Lewandowski undertook efforts to recover the monastery complex, which happened in 1976. Protection and renovation works were started immediately. Two years later, the Poznań curia donated the buildings to the Franciscan Order. Renovation works were still conducted in the church. In 1978, the renovation of the monastery commenced - the northern wing was rebuilt and the eastern wing was elevated to the original height. At the same time, there were efforts undertaken to recover the altarpieces and other fittings donated after the war to other churches. The main altar returned to Woźniki in 1983; also the remaining fittings were soon given back. Works in the monastery were carried out until 1988, in the church - until 1992.

The monastery complex is situated to the north-west of the village, in the Mogilnica valley, on a wooded hill called Wyrwał, surrounded with swamps. The complex is dominated by the Baroque church of St Francis adjoined by the monastery buildings on the southern side. It is surrounded by a decorative garden, fenced with a wall with a gate from the east. In front of the church, there is a Baroque statue of the Blessed Virgin Mary of Immaculate Conception.

The Church of St Francis is a one-nave four-bay building, with a slightly narrower and lower two-bay chancel which terminates in a semi-hexagon on the western side. From the south, the chancel is adjoined by a rectangular annex with an entrance to the sacristy and the monastery choir. The nave and the chancel are covered with tall gable roofs. Over the ridge of the western part of the roof, a slender two-storey steeple turret was added. Under the whole church, there is an underground section.

The church is a brick building. Its walls are covered with plaster. The roofs were covered with tiles. The nave and chancel interiors feature brick barrel vaults with lunettes supported by arches.

The church façades were divided by pilasters, supporting the entablature with an architrave receded over each of the segmental-arched windows. The windows are framed with profiled window surrounds with side sections. The slender eastern façade has three axes, is framed with four pilasters, adorned with conch niches with sculptures of saints, oval niches with vases and coat of arms cartouches. Along the axis, there is a portal framed with a side section surround, topped with a segmental pediment with the date 1723 inscribed. The façade is topped with a profiled crowning cornice and a gable with a slightly raised central part, framed with pilasters and volutes, crowned with a broken pediment.

Inside, the nave and chancel walls were divided by double Tuscan pilasters, crowned with a mitered entablature with profiled, pronounced cornice. The church ceilings are adorned with panels in profiled window surrounds, filled with painted decorations. In the nave walls between pilasters, there are altar niches with semicircular arches. In a slightly narrower eastern bay, a music choir supported on a basket arch was built. The choir piers and parapet were adorned with panels of diverse pattern.

Uniform Late Baroque interior fittings include a set of architectural altars, a pulpit, choir stalls, pews and confessionals. Particular attention should be paid to the main altar. The central field of the altar incorporates a painting of the Porziuncola Indulgence showing St Francis kneeling before Christ and Virgin Mary. The altarpiece is decorated with sculptures of Franciscan saints, made by Antoni Schultz.

The monastery, adjoining the southern church façade, once formed a quadrangle. Only the southern part of the eastern wing was preserved to the post-war times. Currently, the eastern wing exists; it regained its original height and a northern wing was added to it. The monastery wings have a rectangular floor plan. The two-storey eastern wing is covered with a gable roof; the southern wing - with a shed roof. A cloister with double barrel vaulting has been partially preserved. The monastery buildings were made of brick, and their walls were plastered. The roofs are covered with ceramic roof tiles. The interiors feature brick barrel or double barrel vaulting. The façades are framed with massive buttresses covered with roof tiles, without partitions, accentuated by the rhythm of rectangular windows.

More information on the order’s activity and the Holy Mass schedule is available at www.franciszkanie.net

compiled by Krzysztof Jodłowski, Regional Branch of the National Heritage Board of Poland in Poznan, 18-08-2014. 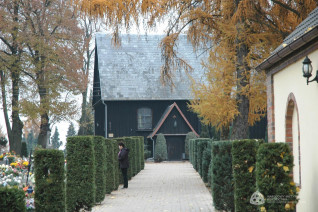 Cemetery Church of the Nativity of the Blessed Virgin Mary 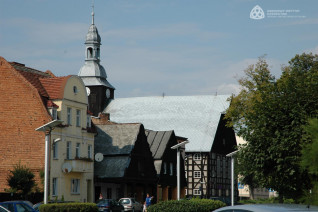 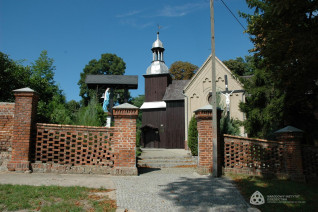 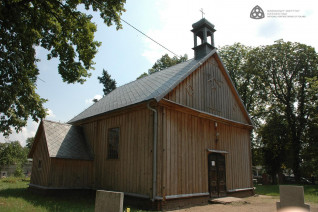 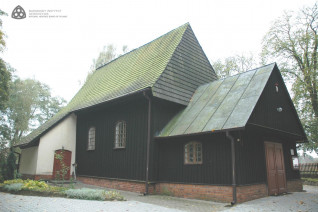 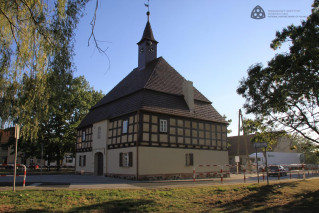 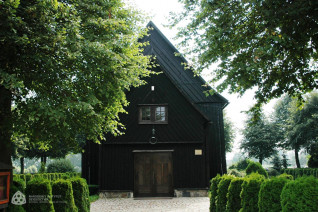 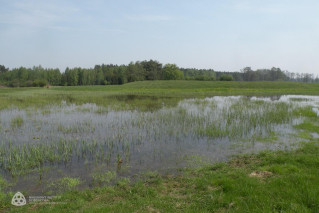 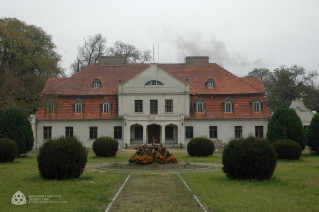