This relatively small palace is an intriguing example of a country residence whose architecture displays both Art Nouveau and early modernist influences - an unusual choice since both of these artistic movements have been rather unpopular among the conservative nobility of Western Pomerania. In addition to its uniqueness, the building also presents a significant aesthetic value.

According to the oldest surviving mentions contained in early modern documentation, the village of Wojtaszyce was the property of a venerable and well-known noble family of von Dewitz, originating from Dobra. From 1756 onwards, the village remained in the hands of Christian von Holzendorf. Later on, in 1781, Christian’s widow, Juliana Levina Gratiosa Holzendorf née Benkendorf transferred the interest in the land to Otto Gottlieb von Ramin for a period of four years. Having acquired the title, he has subsequently managed to have it converted into an allodium - a freehold estate unrestricted by any limitations arising under feudal laws. In 1874, however, Juliana Levina Gratiosa von Holzendorf became the owner of the land once again. During the years that followed, the village of Wojtaszyce changed hands quite frequently. The successive owners of the land were Georg Wilhelm von Hill, a war and treasury counsellor (from 1800 onwards), Friedrich Borchmann (from 1819), Louis Hehn (from 1842) and Justus Pehlmann (from 1846). In 1867, Carl Kannenberg, born in Dobrzanka (currently a part of the town of Dobra in the Łobez district) became the lord of the manor. Little is known about the appearance of the Wojtaszyce manor house in the years preceding the construction of the existing building. According to the authors of the documentation pertaining to the local park, the landscape park was established back in the late 18th century, replacing an even earlier, Baroque garden. However, the existing manor house was substantially modernised in the second half of the 19th century, at which point the accompanying utility buildings were also erected. No iconographic documentation exists today which could shed any light on the appearance of the manor house at that time; based on the analysis of the existing palace, one may conclude with a high degree of probability that the ground-floor section thereof incorporates the walls of the earlier building. The old manor house, erected in the second half of the 19th century, was a single-storey building with a gable roof, featuring a pair of two-storey avant-corps projecting from the front façade and the garden façade. The exact date of construction of the existing palace is unknown. The most likely version is that it was Carl Kannenberg who commissioned the modernisation of the old manor house in the years 1905-1914. This conclusion is based both on the appearance of the building and the nature of the architectural detailing used. However, it is also possible that it was Karl’s son, Erich Kannenberg, who commissioned a redesign in the early 1920s. This theory appears plausible given the shape of the horizontal, rectangular windows in the gable-end façades as well as the now-defunct windows with vertical muntin bars. Both of these features enjoyed a great popularity in the architecture of the 1920s. One may therefore not rule out the possibility that the palace in Wojtaszyce is an example of the architecture of the 1920s, its ostensibly Art Nouveau detailing being in fact influenced by the Art Deco movement. It is common knowledge that the dominance of Historicism in the architecture of the country homes of the nobility survived into the late 1930s, with very few modernist influences manifesting themselves in the form of isolated motifs or themes. The palace, built during the early 20th century, combines Baroque Revival and Art Nouveau influences. The existing manor house was extended upwards by a single storey in its middle section, the resulting structure being covered with an impressive mansard roof. In the 1920s, the entire manor became the property of Carl Kannenberg’s son, Erich Kannenberg. It has been confirmed that the manor farm buildings were redesigned under his ownership. The distinctive avant-corps of one of the utility buildings, with its vertical, slit-like decorations, bears testimony to the influence of the modernist aesthetic.

After the war, the Wojtaszyce manor was nationalised and handed over to the local State Agricultural Holding (PGR). From the 1970s onwards, the Agricultural Production Centre in Wojtaszyce formed part of the PGR Combine in Dobra. The period wooden casement windows with their distinctive vertical muntin bars have survived into the 1970s. After 1991, the Wojtaszyce manor was under the management of the Agriculture Property Agency of the State Treasury. In 1993, the palace was leased out as a holiday resort for children. The palace underwent restoration in the years 1996-1997; however, the renovation works were performed in disregard of conservation practices, leading to the destruction of the valuable period window joinery. Today, the palace remains private property.

The palace in Wojtaszyce is located in the middle of the village, on the southern side of the main village road. A landscape park stretches to the east and the south-east of the palace. Towards the west lies an ensemble of utility buildings forming part of the former grange. The front façade of the manor house faces the main village road. A large, semicircular courtyard stretches ahead of the front façade, its boundaries marked by a monumental fence made of brick and wood.

The palace itself is an eclectic design, its forms displaying influences of the Baroque architecture, Art Nouveau and even the Romanesque style (the portal inside the entrance porch, the paired windows in the eastern avant-corps gable).

The building was designed on a rectangular floor plan, with a front (western) entrance porch and an observation deck facing the park. The shorter of its façades are adjoined by a rectangular annex to the south and a small, rounded avant-corps to the north. The silhouette of the palace is quite unusual, especially when compared to other country homes of the Pomeranian nobility. It is a single-storey building with a pair of two-storey pseudo-avant-corps - the broad front avant-corps and its slightly narrower counterpart facing the park; the main body of the building is covered with a mansard roof featuring an elevated section above the front avant-corps. The roof jerkin heads are accentuated by small dormers pierced with rows of small, rectangular windows. Additional dormer windows break the monotony of the surfaces of the large mansard roof. The eastern pseudo-avant-corps is covered with a separate mansard roof, while the southern annex features a low mono-pitched roof. The rooftop of the entrance porch doubles as an observation deck.

The palace is made of brick, its walls covered with plaster. The plinth of the entrance porch is made of rectangular stone ashlar blocks. The façades of the building, covered with a smooth plaster finish, are pierced with a number of windows; most of the ground-floor windows are arranged in pairs and topped with segmental arches with a low rise; the windows on the upper levels exhibit a large degree of variation in terms of both shapes and sizes. The windows in the upper parts of the gable-end façades deserve a particular attention, their horizontal, rectangular form being a manifestation of early modernist influences. The seven-axial pseudo-avant-corps positioned in the centre of the eleven-axial front façade is crowned with a semi-oval pediment. The plinth is differentiated from the rest of the structure through the use of textured plaster adorned with horizontal decorative grooves. The three-axial entrance porch features large windows topped with arches with an elevated rise. The entrance, positioned on the middle axis, is accentuated with a portal topped with a semi-circular arch and flanked by a pair of stout columns supporting a tall pediment with two-sloped, slightly concave edges. The entire pediments rests upon angular spirals positioned above the column capitals and bearing the hallmarks of the Art Nouveau style. The socle beneath the porch is accentuated by the presence of an exposed stone surface, made up of roughly hewn ashlar blocks of different sizes. The central section of the rear façade is accentuated by a three-axial pseudo-avant-corps crowned with a gable featuring a convexo-concave outline. In the centre of the gable there is a large paired window, topped with round arches and featuring a stout column in the middle. The entrance, accessible through an open terrace, is accentuated with a portal surmounted by a polygonal pediment supported by a pair of smooth lesenes and incorporating a profusion of dense foliate ornamentation in its midst. A small avant-corps with a semi-oval outline projects from the middle of the three-axial northern gable-end façade, its windows facing the nearby road. The decorative panels on the walls of the avant-corps are adorned by a dense ornamental pattern incorporating gargoyle and foliate scrollwork motifs which frame the oval cartouche in the middle of each panel. Similar decorative patterns were also applied to the frieze at the very top of the avant-corps. The panels positioned above the large, tripartite window in the southern part of the gable-end façade, its top section following a semi-circular outline, are likewise adorned with a dense foliate pattern. The western and southern façades of the southern annex are topped with a parapet wall designed to look like a balustrade. Only parts of the original window joinery have survived in the window openings of the palace, yet even those windows that did survive have been deprived of the original muntin bars.

The palace interiors follow a two-and-a-half bay layout with a hallway in the centre and an enfilade arrangement of rooms. In the middle of the palace lie two grand interiors - the entrance vestibule up front and the former drawing room in the back, its windows overlooking the gardens beyond. The upper rooms are accessible by means of a staircase positioned inside the hallway. The interior décor of the entrance vestibule deserves a particular attention, with its faux beamed ceiling as well as period wood panelling and window joinery.

The building is private property and may only be viewed from the outside.

compiled by Radosław Walkiewicz, Regional Branch of the National Heritage Board of Poland in Szczecin, 21-05-2015. 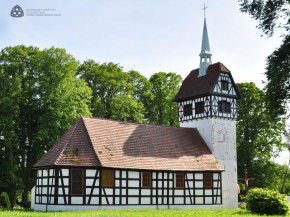 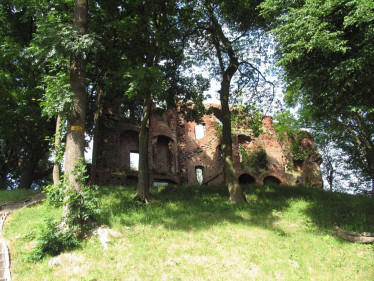 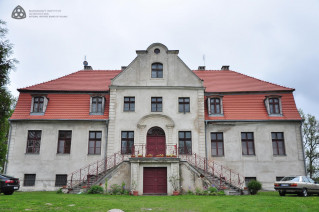 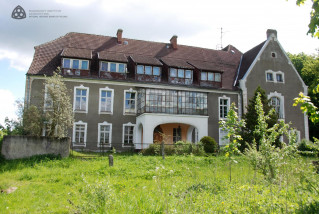 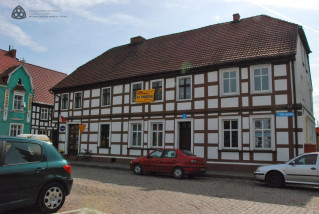