Parish church of Christ the King

Erected during the transitional period between the Romanesque and Gothic era, this church represents a design that was quite typical for the region, its tower erected at a later stage and modelled after the design of fortified structures. Inside, the church features lavish Late Baroque fixtures and fittings.

The church was erected in the second half of the 13th century. The existence of a parish church in Witnica is confirmed by the land and mortgage register of the margrave Ludwig the Elder (1337), which stated that the local parish owned four voloks of land, with a further volok assigned directly to the church (the volok or włóka being a late medieval land measurement unit used in the Polish-Lithuanian Commonwealth). During the 15th century, the western section of the church was extended through the addition of a tower adorned with a crenellated parapet and a brick spire. In 1458, the first mention was made of the von Sack family who owned the village and who extended their patronage over the church until the early 19th century. Somewhere around the year 1540 the church was taken over by Protestants, becoming a filial church of the Evangelical parish in Przyjezierze. Towards the end of the 16th century or in the early 17th century, a Late Renaissance gate leading into the church cemetery was built. The Late Renaissance sandstone baptismal font which graces the church interior was added in 1598; it is believed that the two patrons’ pews surviving inside the church were also made during the same period. In the 18th century, the church received its sumptuous fixtures and fittings, funded by the patrons of the church. In 1710 or thereabouts, the main altarpiece with integrated pulpit as well as the patrons’ gallery were constructed, both of them funded by Hans Georg von Sack. The first half of the 18th century was also the time where a number of new windows were added, as was the wooden faux barrel vault above the nave, adorned with painted decorations in 1748 by the painter C. Eyffler. The same artist was also responsible for the painted decorations which grace the spandrel walls in the eastern and western sections of the church, portraying the Resurrection of Christ and Judgement Day respectively. During the second half of the 18th century, a large, two-storey organ gallery was added in the western part of the nave, obscuring the spandrel wall polychromy in the process. At that point, the entrance into the church was relocated from the porch beneath the tower to the southern façade, where a new, two-storey porch was added. Somewhere around the year 1830, a Gothic Revival tomb chapel dedicated to the von Oelsen family - the erstwhile owners of the village - was constructed, adjoining the eastern wall of the church. The pipe organ, made by the Szczecin-based company Grüneberg, was installed in 1850. In 1911, the church underwent comprehensive restoration, with its appearance being remodelled in the Gothic Revival style. The western nave entrance was opened once again, with a two-storey inner porch being constructed inside the tower. The Baroque southern porch was demolished and replaced by a new one, likewise designed in the Gothic Revival style. The next series of renovation works followed in 1932 or thereabouts. It was at that point that the tower was renovated, its crenellated parapet restored to its original appearance. Inside, various painted decorations were exposed from beneath the layers of plaster and subjected to conservation works. The organ gallery received new painted decorations, while the pews were replaced with new ones. The building was reconsecrated as a Roman Catholic church on 29.11.1952. In 1973, a Roman Catholic parish in Witnica was founded. During the postwar period, a number of alterations were made, many of them sadly detrimental to the historical value of the church. These changes included the transformation of the original altarpiece during which the pulpit casing was dismantled, as were some of the period choir stalls.

The church is located in the middle of the village, on a small hill; it is surrounded by a cemetery - still in active use - circumscribed by a stone wall and overgrown with old trees. A pair of gates positioned in the southern and western sections of the wall facilitate access into the graveyard. The western gate is crowned with a lavishly designed gable bearing the hallmarks of the Late Renaissance style. The church is oriented towards the east. It is an Early Gothic edifice, designed on a rectangular floor plan, with the porch beneath the tower being added at a later date; in addition, the church also features a family tomb adjoining it towards the east as well as the external porch adjoining its southern façade. The tower, designed on a square floor plan and topped with a pyramid-shaped spire surrounded by a crenellated parapet, rises above the western end of the nave. The nave, the two-storey southern porch and the former family tomb are all covered with gable roofs, with the roof ridge of the porch positioned perpendicularly towards the axis of the church. A small steeple crowns the eastern gable.

The walls of both the nave and the southern porch are made of granite setts arranged in regular layers; the tower walls were constructed using field stones showing little signs of dressing, while the eastern gable and the spire above the tower are made of Gothic-era brick. Mass made brick was used for the construction of both the tomb chapel and the crenellation which crowns the tower. The roofs are covered with beaver tail roof tiles, with the exception of the tower spire, which is made entirely of brick.

The Early Gothic portals are topped with pointed arches, much like the Early Gothic windows - most of which are now bricked up - and the Gothic Revival window and door openings of the porch. The early modern windows illuminating the nave, on the other hand, are topped with basket-handle arches. The middle section of the western façade is accentuated by an Early Gothic main portal with three-stepped, archivolt reveals. A group of original openings can be seen in the southern wall - a window and a bricked-up portal in its western part and a trio of bricked-up windows in its eastern part. The corners of the Gothic Revival porch are reinforced with buttresses, while its southern façade features an asymmetrically positioned portal and a trio of ground-floor windows, above which rises a decorative gable adorned with blind windows. This façade is also adorned with a ceramic plaque bearing an inscription which reads, “Ren. A.D. 1911 A. v. Oelsen”. Vestiges of the original window openings can also be seen in the eastern wall, topped with a recessed frieze and a Late Gothic brick gable adorned with pointed-arch blind windows. The northern wall, currently pierced with a pair of windows topped with basket-handle arches, was originally devoid of window openings. The façades of the tower rising above the western part of the church are partitioned with blind windows topped with paired round arches, with the walls of the uppermost section being pierced with bell openings taking the form of pointed-arch paired windows. The tower shaft is crowned with a brick crenellation, while the corners thereof are graced by finials reminiscent of pinnacles.

Inside, the church features a wooden vaulted ceiling of the barrel type. The eastern end of the nave is separated from the rest by a wooden partition constructed during the Baroque period, with the altarpiece positioned against the background thereof. The western part of the nave is surrounded from three sides by a spacious, two-storey organ gallery designed on a roughly decagonal plan. Both levels of the gallery are supported by Tuscan columns. The panelled parapets of the lower gallery are adorned with painted coats of arms, while the upper gallery features an openwork balustrade made of turned balusters, behind which rises the Gothic Revival pipe organ casing. A two-storey Baroque patrons’ gallery adjoins the southern wall of the church, featuring a truly lavish woodcarved décor which includes the sculpted family crests adorning the parapet panels.

The wooden vaulted ceiling above the nave is graced by a painted representation of the sky and the clouds, amidst which sits an oval plafond incorporating the painted personification of Faith. The spandrel wall above the altarpiece is adorned by a large scene depicting the Resurrection of Christ. Fragments of the corresponding painting of the Judgement Day can still be seen on the western spandrel wall above the organ gallery.

The church features numerous period fixtures and fittings. These include the Late Baroque altarpiece (originally with an integrated pulpit), the pulpit casing having subsequently been disconnected from the retable and repositioned on parts of Late Renaissance choir stalls; there is also a Late Renaissance baptismal font from 1598, a medieval granite stoup embedded in the western wall, a pair of Late Renaissance patrons’ pews from the late 16th century as well as a painted wooden epitaph plaque from the Late Baroque period, dedicated to Hans Christoph von Sack, who died in 1713. Inside the tower, there is a bell from 1579, cast by the bellfounder Joachim Karstede.

Viewing of the structure is only possible by arrangement with the parish priest.

compiled by Maciej Słomiński, Regional Branch of the National Heritage Board of Poland in Szczecin, 06-11-2014. 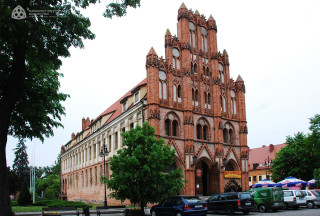 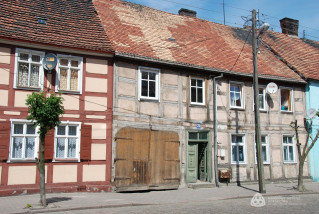 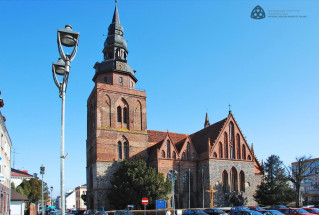 Saint Nicholas parish church, currently the church of the Nativity of the Blessed Virgin Mary 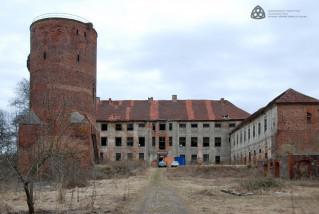 Castle of the Order of St John 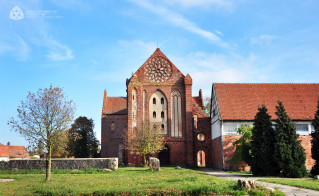 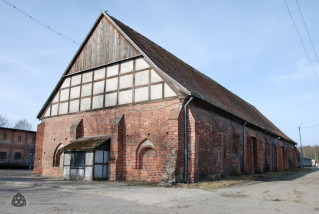 Filial church of the Blessed Virgin Mary Queen of Poland 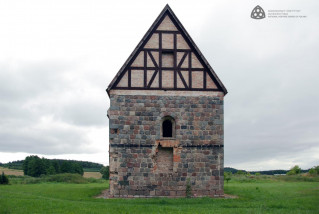 The chapel of the Templars 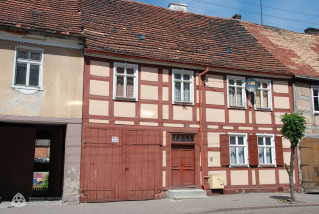