Wiślica - The Collegiate Church of the Nativity of the Blesses Virgin Mary together with Relics of the Church of St Nicholas, and the Stronghold

Wiślica is the smallest Polish town, located on the left bank of the Nida River, surrounded by vast fields and meadows, in the Nadnidziański Landscape Park area. In the jubilee year of the centenary of Poland regaining its independence, Wiślica was again granted town charter, lost in 1870. Rich history of the town and its remarkable architectural objects, being artistic foundations of outstanding historical figures, are today invaluable memorabilia of Polish material and spiritual history.

In the opinion of historians studying the history of this region, Wiślica, along with Kraków and Sandomierz, belonged to the most important administrative, political and strategic centres of the first Piasts’ monarchy. It also defended a river crossing on a trade route linking these cities with Prague and Kiev Rus’. Origins of the settlement could have dated back to the times of the Great Moravian Empire, when it functioned in the area referred to as the Principality of Vistulans, mentioned for example in The Life of St Methodius known also as the Pannonian Legend. Legend has it that the Moravian bishop admonished the pagan duke of the Vistulans, who did harm to Christians by invading Great Moravia. During one such invasion, he was captured and baptised. Archaeological research conducted in the basement of the collegiate church at Wiślica before the Great Millennium Anniversary in the early 1960s did not confirm the hypothesis that the duke of the Vistulans made Christianity a state religion already in the second half of the 9th century, when the missionaries sent by St Methodius operated.

Under Duke Bolesław the Bold, the settlement developed considerably in the area of today’s Wiślica. Two fortified towns were established, one of which, with double ducal residences, with palatia and rotundas, called Regia, became the core of the later chartered town (ca the first quarter of the 14th century), while the other one, the so-called mound in the meadows, was situated in the backwaters of the Nida River. There was also a settlement in the place of today’s Solny Square, with a single-nave church of St Nicholas (?) dated from the turn of the 12th century.

Wiślica experienced the greatest flourish during the reigns of Dukes Henryk of Sandomierz and Casimir the Just. In the second half of the 12th century, Duke Henry founded the first Romanesque collegiate church of the Virgin Mary for the congregation of canons. It was a single-nave church with a presbyteral part closed by an apse, cross-vaulted and supported on four columns. During the aforementioned archaeological research, one of the most beautiful monuments of Polish Romanesque art was discovered in the crypt under the presbytery – an engraved gypsum floor with figural depictions, known as the Plate of Orans (1175–1177). It depicts two groups of figures in two fields: a ducal couple, a young man, a clergyman, an old man and a boy, surrounded by a rich border of braided plants, complemented by images of dragons, griffins, a lion and a centaur. The figures are shown praying. Above the upper field an inscription is engraved: “They want to be trampled, so they may ascend to the stars”. Art historians hypothetically associate these figures with the founders of the church; they also do not exclude a possibility that Duke Henryk himself was buried in the crypt. Another building discovered during the research was the second Romanesque collegiate church (of the Holy Trinity), erected in the second quarter of the 13th century to replace the nave of an earlier church. It was a three-nave basilica without a transept, with a rectangular presbytery with chapels on the sides and a two-tower west part. An interesting element, which is a remnant of the second Romanesque collegiate church, is the ceramic floor from the presbytery part, decorated with rosettes.

The Gothic collegiate church of Nativity of the Virgin Mary was erected ca 1352–1380 on the remnants of two Romanesque churches. Deemed by Jan Długosz as one of Casimir the Great’s foundations, being an expiation for the king’s order to kill canon Marcin Baryczka, it is the most important royal foundation, with a specific political significance. This is manifested, among other things, in the sophisticated decoration of the church – on the vault keystones there are coats of arms of lands that became part of the Kingdom of Poland reborn after the feudal disintegration. The church witnessed historical events important to the country, including the codification of the Lesser Poland law in form of the so-called Wiślica statutes. The collegiate church is one of the most magnificent and best preserved objects of the so-called group of two-nave Casimir churches (along with Stopnica, Niepołomice and Szydłow). It is composed of a rectangular, two-nave, four-bay body and a lower and narrower presbytery with sacristy and treasury on the sides. The naves are covered with a stellar vault with tripartite bays and ribs directly flowing on three slender, polygonal pillars standing on the axis (reconstructed after World War I). The architecture of the church features solutions typical of the so-called royal workshop style, taken from Western court and papal art.

Inside, an interesting element is an erection plaque funded by Jan Długosz and placed by him above the south portal, depicting Casimir the Great kneeling before Madonna with Child and offering a model of the temple to her (dated 1464). Equally valuable are also the Gothic tabernacle in the south wall of the presbytery, decorated with a triangular tracery crown, and the early-Gothic stone statue of the so-called Elbow-high’s Madonna of 1260–1280, placed in the main altar, and crowned by Cardinal Stefan Wyszyński in 1966. On the walls of the presbytery there are preserved fragments of Byzantine-Ruthenian polychrome from 1397–1400 with zonal layout, with scenes from the Marian and Christological series, and figures of saints. They are associated with King Władysław Jagiełło, a ruler raised in the Eastern culture, who ordered to decorate many churches in the Orthodox style. Such frescoes have been preserved until today only in the cathedral in Sandomierz, in the castle chapel in Lublin, in the St Mary’s Chapel at Wawel, and at Wiślica.

During World War I, the collegiate church was seriously damaged by the Austrian artillery. The nave vaulting collapsed (with roof truss preserved), the west facade with towers left from the second Romanesque church was also destroyed. After Poland regained independence, the conservation community called for action to secure the “monuments of the past” damaged during the war. The reconstruction of the collegiate church at Wiślica was undertaken in 1923–1926 by professor Adolf Szyszko-Bohusz, who reconstructed the nave vaulting and rebuilt the west church massif. From the preservation point of view, this is an extremely interesting architectural reconstruction operation that consisted of closing the nave with a straight, smooth, sandstone west wall, supported by buttresses and topped with a restored brick gable.

In the vicinity of the temple, a late Gothic building, known as Długosz’s house, stands. It was erected in 1460 with the foundation of Jan Długosz for the collegiate church curates; it was damaged during World War I and then partly reconstructed. This is one of several analogous houses funded by this outstanding Krakow canon and chronicler (missionary house in Sandomierz, in Nowy Korczyn, chapter house at Kanonicza Street in Krakow), which have simple forms and are similar in architectural expression. The house at Wiślica (today a presbytery and museum) is a one-storey brickand- stone building with a basement, with a roof enclosed by gable walls with blind windows, on which shields with the Wieniawa coat of arms are placed. The characteristic portals, known as Długosz-type, have stepped stone frames. Inside, Gothic polychrome with an image of the Resurrected Christ and a woman with a cross as well as remnants of polychrome on wooden ceilings have been preserved. Next to the curate house, Długosz also erected a majestic four-storey brick-andstone belfry topped with an arcaded frieze with coats of arms.

The mound located among meadows to the east of the town is a remnant of an early-medieval fortified settlement (ca the 10th century) and has retained a clear topographic form. It is connected with important events in the history of Poland, especially with Władysław the Elbow-high’s fight for the Krakow throne, in which Wiślica played a significant role.

The collegiate church complex at Wiślica is one of the most valuable historical Gothic ensembles in Poland, uniform in style, with the original composition preserved. In the opinion of Professor Andrzej Tomaszewski, the two-nave collegiate church hall belongs to the top architectural achievements of all time in Poland. In turn, the Plate of Orans, a masterpiece of Romanesque art, ranks among the most precious pieces of European art of that period. Gypsum screed floors decorated with an ornament are found in European churches; however, there are no floors with images of historical figures. The complex of monuments at Wiślica is also a heritage of the preservation thought, implemented here by the doyen of Polish preservationists, Adolf Szyszko-Bohusz, who reconstructed the buildings with aim to preserve the authentic substance to the maximum extent, introducing a reconstruction aligned with a purist vision of Gothic.

Decree issued by the President of Poland that bestows on the collegiate church of the Nativity of the Blesses Virgin Mary together with relics of the church of St Nicholas, and the Stronghold the prestigious title – the Monument of History / 4653kB 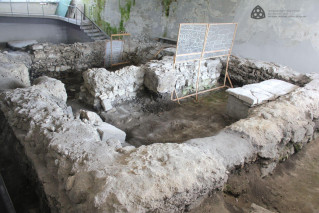 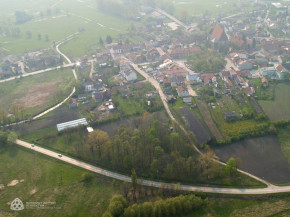 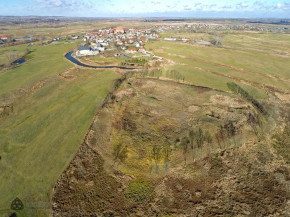 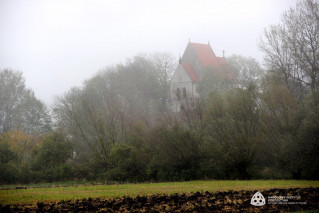 Complex of the parish church of of St. Jerome, Holy Virgin Mary and St. Stephen the King 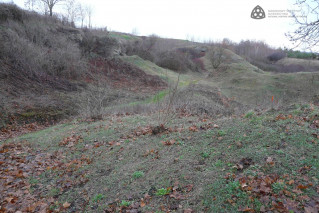 The “Skorocice” rock and steppe reserve 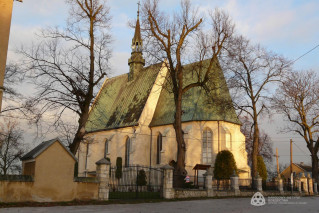 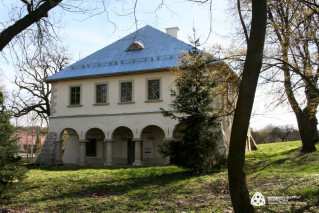 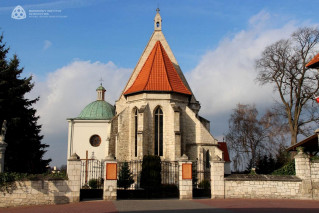