The monastery complex of the Camaldolese in Bielany district of Warsaw is distinctive for its unique artistic and historical values. Despite numerous alterations, the preserved church and a zone of hermitages, that is, separate houses of monks, represents an example of a characteristic layout of Camaldolese hermitage. The post-monastery temple, which is a dominating building within the complex, is recognised as one of the most beautiful sacred buildings in Warsaw, distinctive for its original spatial arrangement on a central and elongated plan. Numerous treasures belonging to fittings and decor of the buildings remind us of the rich history of this place, whose existence and functioning was closely related to subsequent Polish rulers and magnates. During the Partition of Poland, a tombstone of Rev. Stanisław Staszic, located near the church, was an extremely important symbol for independence movements.

The construction of the monastery was initiated around 1639 by king Władysław VI as a thanksgiving for the Polish crown and the victory in the Smoleńsk War. It was the third hermitage in Poland after foundations in Srebrna Góra near Cracow and near Rytwiany and the first one founded by the king. The monastery site on the so-called Polkowa Góra was selected by the monks themselves, in accordance with the rules they stuck to: outside the city, on a hill, within a wooden area. In 1643 the monks were brought to wooden buildings, which were gradually replaced by the brick ones. In the years 1647-1651, 9 hermitages were built and in 1733 the last one out of the existing 13 hermitage houses was erected. Gradually, masonry buildings for common use and utility purposes were added. After 1864, as a result of post-uprising repressions, a gradual decline of the monastery began. In the late 19th century some of the buildings were taken over by the Russian Red Cross. In 1904, after removing the last monks, war invalids were hosted in the hermitages. In 1915 the post-monastery developments were handed over to the Marian priests, who established a religious house with a novitiate and a shelter for homeless children and, a year later, a seminary. In 1918 they also opened a philological gymnasium for boys, for the purpose of which in 1923, in place of former monastery buildings, the construction of a building to the design of J. Holewiński began, which was completed in 1924 to the design of T. M. Sawicki and B. Zborowski. Before 1939 the old monastery outbuilding was expanded to house the gymnasium’s dormitory. Both buildings were destroyed during the war. In the post-war time, particular hermitages were subject to gradual restoration. In 1954, after the removal of the Marians by the Security Service, the hermitages and the dormitory building were handed over to the Academy of Catholic Theology. In the years 1979-1986, in place of the gymnasium, the building of the Warsaw Metropolitan Seminary was erected to the design of Leszek Klajnert. In 1997 a new complex of Academy buildings began to be constructed around the historic features. In 1999 the Academy was transformed into the Cardinal Stefan Wyszyński University.

The masoned Church of the Immaculate Conception of the Blessed Virgin Mary, St Joseph and St Ambrose was built in stages. In 1659, upon initiative of king John Casimir, the design of the temple was created, ascribed to Isidoro Affaitati. Before 1673 a presbytery with two towers was built. Around 1684-1696 finishing works of the presbytery part were under way and Michalangelo Palloni created frescos in the sacristy. In the years 1733-1758 a nave corpus was executed on the old foundations, to the altered design, perhaps by Gaetano Chiaveri. The front façade was built in the 3rd quarter of the 18th century. In 1857 the church underwent restoration under the guidance of architect Antoni Sulimowski. In 1870 the restoration works were supervised by Franciszek Tournaille. W 1905 a parish was established at the church and in the years 1909-1911 adaptation works were carried out, adjusting the post-monastery temple to the new role, based on the design by Józef Pius Dziekoński. At that time, the choir gallery and the new main altar were built. In 1913 archbishop Aleksander Kakowski dedicated the church. In September 1938 the roof burned down, parts of vaults collapsed and the tower was partially destroyed. In 1942, an architect B. Zborowski temporarily secured the church, but in 1944, after the demise of the Warsaw Uprising, the Germans set the temple on fire. In the years 1952-54 preservation works were carried out in the church. In 1999 the parish of the Blessed Edward Detkens was founded. The church was elevated to the status of collegiate church in 2003.

The historic complex is located at the highest point of the northern section of the Warsaw Escarpment. Post-monastery buildings, surrounded by contemporary buildings housing archdiocese institutions and the Cardinal Stefan Wyszyński University, neighbour on the Bielański Forest reserve, which is a relic of the southern part of the Mazovian Forest. The complex is accessible from the west by Dewajtis Street, an old road linking Polków village with the Zakroczym tract. The Wisłostrada expressway, built at the foot of the escarpment in the years 1972-1975, separated the historic complex from the river.

Despite the lengthy construction period, the post-Camaldolese complex met the strict requirements of the Monte Corona congregation hermitage. A temple that forms a dominating point of the entire complex and a strict cloister zone with thirteen hermitages located in four parallel rows, surrounded by own masoned fence with Baroque gates, has survived to our times. The entire monastery area with a farm was surrounded by a masoned fence, of which only a utility yard gate from the mid- 18th century, located in the west, at the foot of the elevation, has survived. The complex axis is set by a wooden crucifix planted at Dewajtis Street in place of an initial one, which marked the beginning of delimiting the monastery area in 1654. When we stand in front of the church front façade, we can spot it through a glass clearing of the façade of the modern post-seminary building, erected in place of monastery buildings, and located along the axis of a gate with a long gorge leading to the building, through which the square in front of the church was accessed. Monastery outbuildings with common use rooms and utility facilities were located west of the hermitages. Walls of these buildings were incorporated into the gymnasium dormitory erected for the Marian priests. This three-storey building, rebuilt after the war, with two perpendicular side wings and a triangular avant-corps along the axis, was connected with modern university buildings from the south in 2005.

Hermitages, that is, houses with a garden at the front, surrounded by a wall, each of which was dedicated to one monk, were built according to strict monastic rules. In line with the regulations, a house of a hermit consisted of a hall along the axis, a chapel on the right, a cell and a woodshed on the left. Despite a unified plan, the hermitages found in the Warsaw monastery differ from one another. Some of the houses have gable roofs, some of them hip roofs. They also differ when it comes detail of portals and gables carved in stone. Inscriptions and coats of arms indicate the date of construction and affluent founders of particular houses. The first house in the north-eastern corner, currently occupied by the parish priest, called the royal house, has a gable decorated with a coat of arms of Władysław IV. Private users of the houses distorted the historic arrangement of hermitages by adding annexes.

A varied style of particular parts of the church body reflects stages of construction. The presbytery part accentuated by two towers, erected in the years 1669-1696, houses a two-bay presbytery with two-storey rooms: a chapter house on the left and a library above, a sacristy with a treasury above on the right. Spatial composition of the nave corpus erected in the years 1733-1758 departs from strict construction rules of the Camaldolese. It is distinctive for its original spatial arrangement, set on an octagonal plan intertwined by a cross and covered by a sail vault with lunettes. Side walls open towards the pairs of chapels communicated with transept wings by wide arcades. Articulation by means of Corinthian pilasters endows the entire interior with the feeling of coherence. Forms of stuccowork created in subsequent stages of construction exemplify different styles. The artistry attests the high class of authors of the stuccowork. In the three-axis front façade, erected probably to the design by Gaetano Chiaveri, a two-storey middle part dominates. It is accentuated by pairs consisting of a column and a pilaster in the Giant Order, crowned with a triangular tympanum with a coat of arms of the Republic of Poland. Outstanding architecture and decoration of the front façade connects Late Baroque and early Classicism.

Pursuant to his last will, Rev. Stanisław Staszic (1755-1826) was buried next to the temple. A tombstone, consisting of a simple slab and a bust cast in metal, placed in a niche crowned with a crucifix, was founded by the Agricultural Society of Hrubieszów (founded by Staszic) in 1876.

The historic development of the complex also includes a casing of the spring located in the east, at the foot of Polkowa Góra. A Classicist stone pylon crowned with a decorative vase and adorned with a cast iron slab with an image of a fish was created in 1835, probably to the design of Henryk Marconi. In 2001, the well was renovated and fenced.

The church is open to visitors on Sundays, between religious services. An art cellar functions in the basement, next to the catacombs of the Camaldolese. Access to hermitages is limited, except for the house of the A.S. Radziwiłł foundation, which houses a university bookstore.

Compiled by Małgorzata Laskowska-Adamowicz, Regional Branch of the National Heritage Board of Poland in Warsaw, 06-08-2014. 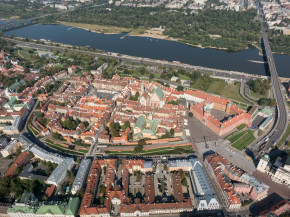 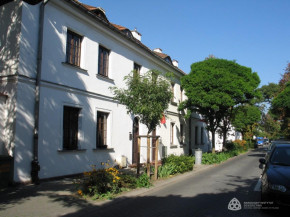 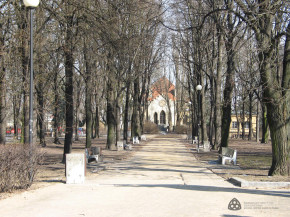 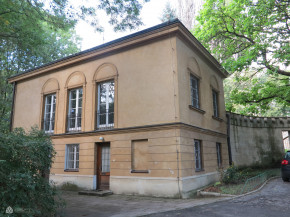 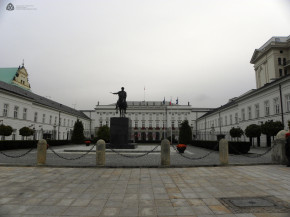 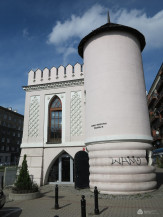 Mauritanian house in the complex of the Szuster palace 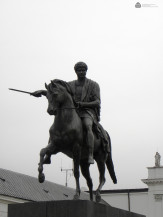 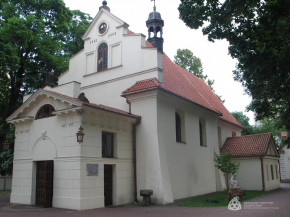 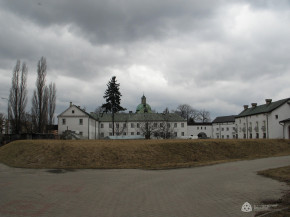