The building of the Fraternity of St George remains a distinctive feature of the landscape of any Hanseatic city, serving as evidence of the gradual emancipation of the wealthy patriciate. Despite having changed its function on numerous occasions, the Patrician Hall in Toruń has retained most of its original, Gothic features. The building is situated in the area inscribed on the UNESCO World Heritage list which also forms part of the monument of history designated as “Toruń - Old and New Town District”.

The Patrician Hall was erected after 1484, its original purpose being to serve as a summer residence of the Fraternity of St George. The structure of the building incorporated the remnants of fortifications which existed on the site and which had originally formed part of a Teutonic castle that was demolished in 1454; these included, among others, the corner watchtower as well as the basements which survive beneath the southern part of the building. At that time, the northern part of the building did not feature a basement. The design of the northern façade was dictated by its immediate surroundings in the form of an earthen rampart constructed in the zwinger area, on the site of the now-vanished western part of the castle. A retaining wall which lined the side of the moat formed the eastern boundary of the rampart. The moat was not part of the original castle design and was only added at a later date.

In the 1760s, the northern façade of the building was transformed into a rather austere, two-storey Baroque design with an avant-corps in the middle, featuring a triangular gable topped with a tympanum. In the eastern part of the structure, a small, two-storey timber-framed building now adjoined the façade at a right angle, its traces still easily discernible in the structure of the retaining wall leading alongside the moat. At the turn of the 19th century, the Patrician Hall became a military hospital, while in 1817 it was converted into a storage facility.

In 1842, the Fraternity of St George was disbanded, while the building was taken over by the municipal authorities. From that moment onwards, the overall condition of the building, now serving as accommodation for the poor, was deteriorating at an alarming pace. Towards the end of the 1870s, the building was allocated to the Marksmen’s Society, which announced a competition for the renovation and redesign of their new home in 1882. A number of design proposals were submitted, including one by the renowned Berlin architect Johannes Otzen. Unfortunately, the Society did not have enough funds to afford the implementation of any of the submitted designs. In the end, with the financial support of the city council, in 1894 the design submitted by the building counsellor Julian Rehberg was implemented, with some further adjustments made by a man named Steinbrecht. In the course of the renovation works, the interiors of the building were partially remodelled; the top section of the corner tower was redesigned as well, while the northern section of the structure received a new façade designed in the Gothic Revival style.

Later on, when the Marksmen’s Society erected a new building for themselves on Przedzamcze street, the old edifice has lost its former importance and was taken over by the municipal authorities once again. In the 1920s, the Patrician Hall was converted into an apartment building.

In years 1939-1945, the building received meticulous attention from the Nazi authorities, which commissioned comprehensive conservation and restoration works. In the course of the works in question, the interior layout was partially modified; the building received new ceilings, stairways and heating system. The structure was connected to the water and sewage network, with a new water draining system installed on the surrounding site. The northern façade, made of poor-quality brick, was also subjected to conservation works.

After World War II came to an end, the building served as a youth fostering centre and a State Orphanage. During the 1970s, the edifice became a youth hostel. Subsequent renovation works took place in the 1980s as well as in the years 1997-2001, when the Patrician Hall was handed over to the Toruń Twin-Cities Association.

The Patrician Hall is situated in the south-western corner of the former Teutonic castle, at the turn of the northern section of Podmurna street, in the area of the zwinger (site between two neighbouring walls) that had become vacant when the castle was torn down in 1454. South of the building lies the so-called Gall Zwinger, separated from the Vistula river bank by the remnants of a Carnot wall. A curtain wall rising above the moat adjoins the eastern side of the building. A hallway positioned within the wall facilitates access form the gallery above the curtain wall to the Patrician Hall. Due to its location in the immediate vicinity of the city’s fortifications, the terrain topography around the structure remains uneven.

The building was designed on a short, rectangular floor plan, with the tower at the south-western corner being partially embedded in the building’s main body. The original interior layout has been substantially modified over the years. The two-bay ground floor features a hallway in the middle, incorporating a staircase. A portico with rectangular pillars, designed on a rectangular floor plan and preceded by a flight of steps, adjoins the northern façade of the edifice. The body of the building is compact in shape and features a corner tower with a narrower top section. The building is a two-storey building with a daylight basement divided into two levels and a two-storey habitable garret. The main body of the building is covered with a tall gable roof.

The southern façade is positioned above a section of the former defensive wall and slightly receded vis-à-vis its surface, with the resulting space being used as a shallow terrace. The main body of the building is a two-storey, three-axial structure. Its lower section features segment-headed windows and balcony doors. A pointed-arch niche can be seen between the first and the second axis (counting from the east). A row of pointed-arch blind windows with a plaster finish occupies the space between the storeys. Three segment-headed windows set into rectangular niches are positioned axially on the second-floor level; above each window lintel there is a panel covered with plaster and adorned with an exposed brick arch. The entire façade is crowned with a triangular gable adorned with pinnacles, separated from the lower section by a plaster frieze. The overall symmetry of the gable is distorted due to the presence of the upper section of the tower, which was not part of the original design and was added at a later date. The two-level gable is adorned by a row of pointed-arch blind windows arranged in a stepped layout; originally, there were seven such blind windows, although one of them has since been obscured by the upper section of the tower. Most of the blind windows incorporate segment-headed window openings, with the exception of the middle blind window which has a pair of pointed-arch windows at its mid-height, as well as the easternmost blind window which does not feature any window openings at all.

The westernmost part of the façade features a tower projecting ahead of the façade itself, standing on stone foundations and crowned with a crenellated parapet beneath which runs a serrated frieze formed by diagonally positioned bricks. The crenellated parapet is adorned with plasterwork escutcheons. Above the main body of the tower rises a top section designed on a square floor plan with truncated corners, topped with a crowning cornice and a pyramid roof with a fleuron-shaped finial on top. The façades of the top section of the tower follow a single-axial, two-storey layout. The western façade of the tower incorporates a doorway positioned inside a deep, pointed-arch niche with chamfered edges. Above the niche rises a pair of narrow, rectangular windows. Similar window openings can also be seen in the southern and eastern façades, with additional, slit-like openings positioned beneath.

The western façade of the Patrician Hall features a three-storey layout with a distorted axial arrangement, topped with a crowning cornice. Windows set into common, segment-headed niches are present at the semi-basement and ground floor levels. The edges of the niches at the first-floor level are adorned with roll-mouldings.

The northern façade is likewise a three-storey design; it follows a five-axial layout and is topped with a triangular gable topped with pinnacles. Both the wall base and the ground floor level project ahead of the façade in a stepped arrangement. On the middle axis of the ground-floor level stands an arcaded porch with pointed arches supported by rectangular pillars, topped with crenellation which doubles as a parapet of the balcony positioned above the porch. The gable, adorned with seven pointed-arch blind windows, is separated from the main body by a plasterwork frieze. The three middle blind windows incorporate segment-headed window openings positioned directly above the frieze. In addition, a pair of lancet windows can be seen in the upper section of the middle blind window.

The eastern façade rises above the tall retaining wall running alongside the moat. It is punctuated by two rows of blind windows topped with round arches, their surfaces featuring a plaster finish. The individual rows of blind windows are separated by a frieze adorned with a monochromatic pattern incorporating a fish bladder motif. Originally, there were seven such blind windows on each level; however, the two southernmost blind windows in the lower row have been bricked up at a later date.

Limited access to the monument. It can be viewed from outside. The interiors are accessible during various cultural events. The basement level, serving as a restaurant, is open to the general public. 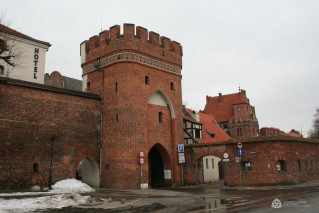 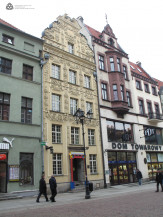 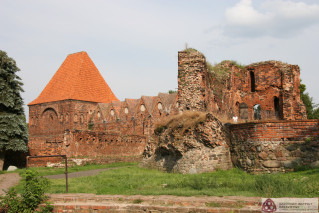 The fortified tower, known as the Leaning Tower 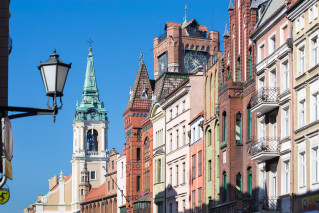 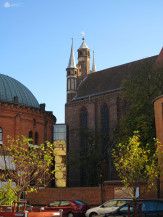 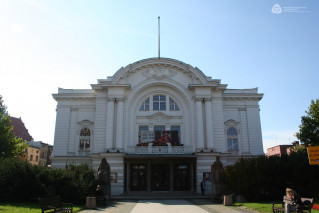