The 13th-century church in Tarczek is among the most prominent examples of Romanesque sacred architecture in the Małopolska region; its distinguishing features are well preserved original architectural forms.

Of great artistic value is also the main altar of the temple - a late-Gothic triptych of ca. 1530 representing Christ revealing himself to Mary after resurrection, painted by the Master of Triptych of Szynk(?).

The church of St Giles in Tarczek was probably built - as reported by Jan Długosz in his Annales - in 1086. It was founded by Prince Władysław Herman as a thanksgiving for the birth of his son, Bolesław. The settlement is first mentioned in the sources in the 1320s as the so-called castellany of the Kraków bishops. It is believed that the current temple was built in the 2nd quarter of the 13th century thanks to the sponsorship of the Kraków bishop, Iwo Odrowąż. In 1228 it was to be the seat of provostry, but this opinion is challenged today. In 1325 the records of Peter’s pence report a new Tarczek parish of St Giles. 1591 saw the completion of a general renovation of the building (a new west façade was erected and the west gallery was deconstructed) and re-consecration. In the 17th or 18th century, new openings were made in the west façade and a porch was added. In 1738 the condition of the roof and the vaults of the temple was qualified as poor. In 1803 a thorough reconstruction was held combined with the construction of buttresses and installation of new windows. In 1887 the interior of the nave was whitewashed and covered with a wooden ceiling. Another renovation fell to 1930. In 1945-1946 the presbytery vault was reconstructed, some Romanesque stonework and modern polychrome were exposed. More conservation works followed between 2002 and 2003. Between 1995 and 1998 the late Gothic triptych of ca. 1530 was conserved. In the years 2010-2012, the church underwent thorough restoration and reconstruction (the roofing was replaced, the aesthetics of the façades was improved, the Romanesque window was restored), and the Mannerist side altars of 1614 were renovated.

The church is located in the west part of the village; it occupies an irregular square surrounded by a stone wall with a 19th-century bell tower in the south-west corner. The Romanesque, oriented temple is a single-nave structure with a narrower, lower and square-shaped presbytery with an low extension on the north accommodating a square sacristy. To the south, there is a low, square porch adjoining the church body; the structure is supported by a large-sized corner buttress. The church was built of dimension stone and was partly plastered. The structure is covered with a gable roof (over the nave and bell turret, presbytery and porch) and two-place roof (over the sacristy). The stone façades of the building, with triangular gables on the east and west, are modest, only the presbytery walls have some preserved relics of the original horizontal and vertical system. The entrances are topped with stone portals, mainly from the 17th century(?), the one over the porch being a pointed arch. The church's interior is covered with a double barrel vault (over the presbytery and porch), lunette vault (over the sacristy) and wooden ceilings (over the nave). In the nave and presbytery, the traces of Romanesque window openings and stonework can be seen (like the supports in the west part of the nave, perhaps reminding of a former matronea) along with the murals of ca. 16th century or the 1st half of the 17th century (mainly ornamental; on the east presbytery wall - the statue of the bishop saint). Among the fittings, it is also worth noting the Renaissance triptych of ca. 1530 (probably by the Triptych Master of Szynk), two Mannerist altars of ca. 1614, a pulpit from the 2nd half of the 17th century, and a stone baptismal font from the 2nd half of the 18th century.

The historical building is accessible to visitors. Visiting upon prior telephone appointment.

Compiled by Łukasz Piotr Młynarski, Regional Branch of the National Heritage Board of Poland in Kielce, 21.10.2014. 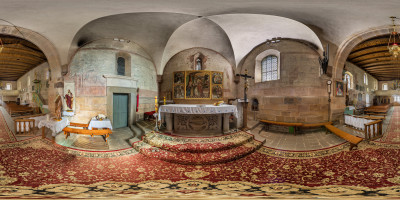 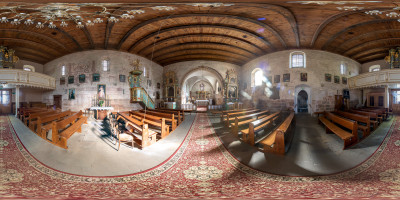 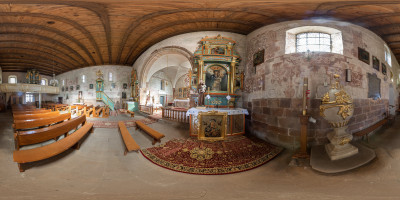 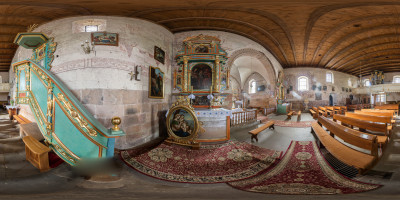 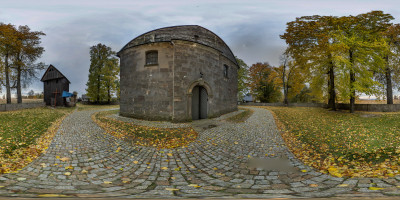 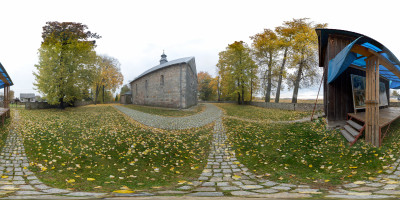 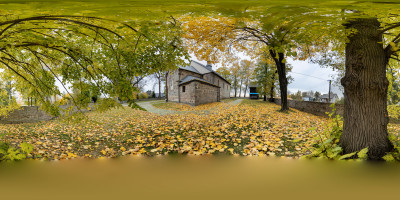 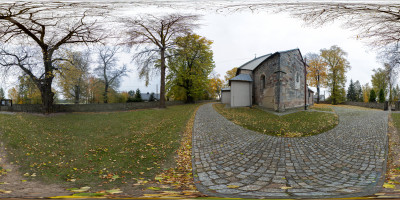 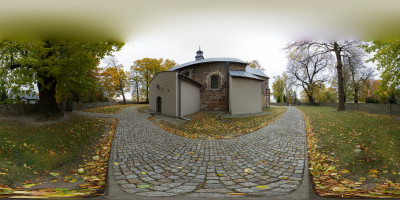