The palace complex in Taczanów and the associated complex of outbuildings is an impressive landed gentry residence whose final shape emerged in the 19th century. The heart of the complex is a classical palace built in the 2nd half of the 18th century and extended in c. 1853, situated in a vast landscape park. In the years 1853-1864, an impressive complex of graceful outbuildings, decorated in the Gothic Revival and Norman styles, was constructed nearby the palace. A Gothic Revival chapel — the tomb of the Taczanowski family — was also built at that time.

In its early history, Taczanów was known as Jastrzyków. Written records dating from 1397 mention it as the seat of the Taczanowski family. From 1618 to 1781, Taczanów belonged to a monastery of the Society of Jesus in Kalisz. Following the compulsory dissolution of the monastery, the Taczanów estate, along with Sowina Kościelna, Sowina Błotna, and Słowiniec, again became the property of the Taczanowskis. Until c. 1795, Taczanów belonged to Mikołaj Taczanowski, the chorąży (an army officer) of the Land of Wieluń; subsequently, it was inherited by his son Maksymilian. In 1852, the vast estate of Taczanów became the property of Maksymilian’s son, Alfons Felicjan, Count of Taczanów. In 1856, the new owner created an entailed estate of Taczanów, which comprised, apart from Taczanów, estates in Lubomierz and the villages of Sowina Błotna, Sowina Mała, Rokitów, Zawada, and from 1867 — also Bógwidze, Kotarby, and Józefina. The second owner of the entailed estate (from 1876) was Alfons’s nephew, Antoni, Count of Taczanów. The third and last owner was his son, Jan, Count of Taczanów (in the years 1917-1939). During World War II, the estate was taken over by the Germans. After 1945, it was nationalised and a PGR (State Agricultural Farm) was established there. In 1970, Taczanów became the seat of a Combined State Agricultural Farm, covering 6100 ha across the whole Pleszew District. Later, the complex was returned to the heirs of the counts of Taczanów. In 1877, the entire entailed estate had an area of 3733 ha. A brick factory and a distillery operated in Taczanów in the late 19th century. In 1926, Taczanów and the Lubomierz manor farm covered an area of 839 ha. Apart from the distillery, a power plant, a sawmill, and a number of plant nurseries operated in the village. Horses, cattle, and pigs were kept in the complex. At that time, the entire entailed estate had an area of 3666 ha. The palace was built in the 2nd half of the 18th century and then extended in 1853. In 1922, the front facade and the front portico were modified. The building underwent full-scale renovations in the 1970s. The outbuildings around the courtyard were constructed in the years 1853-1864. Some buildings or their parts were modified at the end of the 19th century and the beginning of the 20th century. For instance, the aviary building was made lower and converted into a carriage horse stable; a stable by the eastern gate was converted into a residential building. A Gothic Revival tomb chapel was built in the park in c. 1861. A landscape park was established around the residence in the second half of the 19th century.

Taczanów is a large village located 6 km to the south of Pleszew, by Struga Taczanowska, a right-bank tributary of the Ner River, and by a road to Bronów. The palace complex is situated in the central part of the village, on the west side of a road leading to Pleszew. The complex is surrounded by lowland and flat terrain covered with fields and forests. The former estate of Taczanów comprises a residential part, entered into the register of monuments, and a manor farm complex, situated in the western part of the village.

The residential part is situated in the eastern section of the complex. It comprises a palace with an adjacent courtyard surrounded by outbuildings, a tall gate with a small yard on the east side, and a park with a chapel and a bell tower. The whole complex stretches along the east-west axis, starting from the gate marking its eastern boundary, through the small yard, the large courtyard, the palace, the western part of the park with a levee, up to the manor farm yard. The buildings are arranged around a rectangular yard; they are densely spaced on the west and south sides. The main access road to the courtyard leads from the park, from the south-west, through a tower at the corner. The complex is enclosed with a brick wall on the south-east side. The other access road leads from the east, through a gate in a wall built in 1853. To the south of the palace, marking the western boundary of the courtyard, there are two residential outbuildings separated with an entrance gate. Along the southern boundary of the courtyard, there are an orangery, a carriage house, a greenhouse with towers, and an aviary building converted into a carriage horse stable. The so-called small farm yard, adjacent to the large courtyard and occupying the eastern part of the complex, is enclosed with a pentagonal brick wall with a tower on its central axis, separating the complex from the road. A blacksmith’s house and a carriage horse stable converted into flats are located in this part. Along the northern boundary of the large courtyard, there were a carriage house with a stable and a blacksmith’s shop, no longer existing.

The palace is decorated in the Berlin classical style. Its front façade faces the west. The two-storeyed building, made of brick and resting on cellars with segmental vaults, is topped with a gable roof. It has a rectangular floor plan, with an annex on the east side. The western suite of rooms comprises elegant rooms located on both sides of a hall running in the centre, which was originally adjoined by a Louis XV-style drawing room, neighbouring a blue drawing room, on the north side. In the south-east corner, there was a tableware storeroom communicating with one of the residential outbuildings. The façades are covered with plaster with decorative horizontal lines and adorned with a continuous sill and a stucco frieze accentuating the junction between the two storeys. Above the windows, there are stucco decorations with plant motifs. In the front, there is a pseudo-avant-corps with a collonaded portico supporting a balcony enclosed with a cast iron balustrade from the mid-19 century. Inside the hall, there are the original wooden columns, wall pilasters, and stairs.

The residential outbuildings and the tower were built in c. 1864 in the Gothic Revival style. The outbuilding situated closer to the palace originally contained the host’s room, a library, and an administrative office. In the inter-war period, there were also rooms for apprentices and a cash room there. Both the tower and the outbuildings are made of brick and not covered with plaster. Each outbuilding has one storey, a low gable roof, and an arcaded gallery with groin vaults resting on arches. The tower contains an entrance gate; it has two storeys and is covered with a tall, four-pitched roof, topped with flags with the Jastrzębiec coat of arms on metal supports. The tower walls are crowned with a crenellated parapet with pinnacles at the corners. In the blind windows, there are allegorical sculptures of good management. The front façade is decorated with the coat of arms of the Taczanowski family. The orangery was built in c. 1853 in the Norman style. Until 1939, it was used as a ball room, after 1945 — as a storehouse. The façades, not covered with plaster, are divided by means of a string course and bands of glazed brick. The gables are topped with pinnacles and crenellated parapets. The next buildings are: the greenhouse with brick towers, facing the south (the park), and the carriage house. An interesting structure is the aviary building from 1853, built in the so-called Norman style. At the end of the 19th century and the beginning of the 20th century, it was made lower and converted into a carriage horse stable. The one-storeyed, octagonal building is made of brick and covered with an octagonal, stepped roof with a lantern. Inside, in the centre, there are columns arranged in a circle, supporting a flattened dome. By the walls, there are radially arranged boxes. On the south side, there is an open annex for birds, and on the west side, there is a front vestibule, framed by pentagonal annexes. The farm complex is complemented by the former carriage horse stable by the east gate to the complex, converted into a residential building in the early 20th century. It was built in the same style as the other buildings. The buildings around the so-called small yard, located further to the east, look similar.

The complex buildings are surrounded by a landscape park having an area of nearly 18 ha, established after the courtyard buildings had been completed, i.e. in the 2nd half of the 19th century. The park has the shape of an irregular polygon, with the buildings located in its eastern part. The main gates to the park are located on the east side and lead from the road to Pleszew. One path, running along an avenue lined with hornbeams, leads to the front of the palace; the other path leads to the palace courtyard through a gate. Other entrance paths run through the farm yard and from the north-west, i.e. from the forest and a former pheasantry. In the western part of the park, there are three large ponds connected with two other ponds situated outside the park. The park was integrated into the surrounding forests and orchards, and the paths that lead to it are lined with trees. There are specimens of 48 tree and shrub species in the park, including yews, firs, junipers, ponderosa pines, Douglas-firs, chestnut trees, oaks, hornbeams, and magnolias. In front of the palace, there is a lawn with a fountain surrounded by an asphalt path. The lines of hornbeams in the park deserve particular attention. In the eastern part of the park, there is a Gothic Revival chapel from 1861, connected with the bell tower by means of a gallery. They are all made of brick. The aisleless chapel is oriented towards the east. The chancel is narrower than the nave. The walls, supported by buttresses and featuring pinnacles at the corners, are not covered with plaster. They are decorated with a frieze. The front façade is crowned with a tall steeple. Inside, there are a barrel vault with lunettes in the nave and a groin-rib vault in the chancel. The altars, the pulpit, the baptismal font, and the stalls are in the Gothic Revival style. In the chapel crypt, there are bodies of members of the Taczanowski family.

The historic monument is partially accessible: the park is open to visitors and the buildings can be visited from the outside.

compiled by Teresa Palacz, Regional Branch of the National Heritage Board of Poland in Poznan, 28-12-2015. 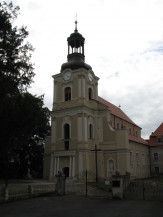 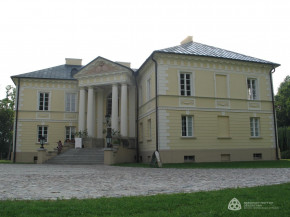 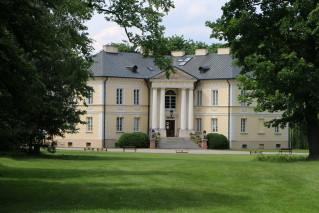 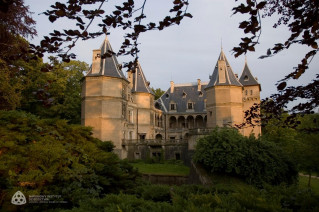 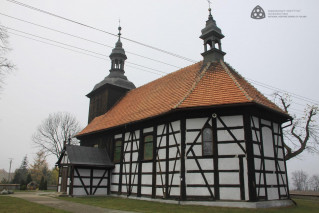 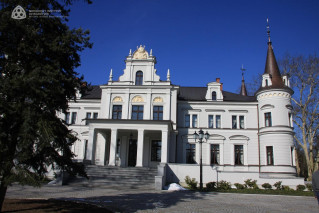 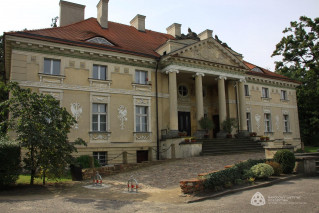 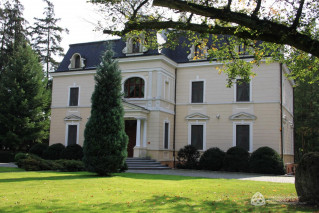 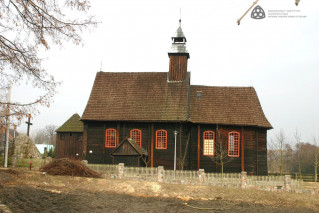