One of the most impressive early 20th-century tenement houses in Szczecin, designed in the Art Nouveau style and rightly considered to be an outstanding work of architecture, inviting comparison with the efforts of the best Western European designers - a truly unique structure having no direct counterparts anywhere in the city of Szczecin and a high point in the oeuvre of the architect Frantz Libergesell. Its defining features are the lavish architectural décor of its façades (including the façades of the side and back buildings) as well as the detailing present in the inner yard, likewise designed in accordance with the principles of the Art Nouveau style.

The current św. Wojciecha street was originally established in 1873, following the demolition of the Fortress of Szczecin. Initially marked with the number 75, it was then given the name of Karkutschdtarasse (from 1899 onwards). The site of the existing tenement house had not been occupied by any structures prior to its construction. Based on the design prepared by Fr. Libergesell and approved in May 1902, the construction works commenced in July of the same year at the request of Albert Netz, a wealthy forwarding agent. The shell of the structure was completed in the late 1902, with the final handover of the completed building taking place on September 5, 1903. In the course of construction works, a few minor adjustments to the interior layout were made, with the interior decorations being redesigned to be even more lavish. In 1907, four additional windows facing what is now known as Plac Zwycięstwa (Victory Square) were added; after that, no further alteration works were conducted, with the tenement house surviving in this condition right until 1943. Between 1943 and 1945, a few of the larger apartments were subdivided into smaller units. During the postwar period, i.e. until the late 1960s, the process of subdivision of the apartments continued, with the former single-family units now serving a number of families for whom new kitchens and bathrooms were being added as the needs dictated. The tenement house underwent a series of conservation and renovation works in the early 1990s.

The tenement house is located at the south-western corner of the quarter positioned between the św. Wojciecha street (west), Bogurodzicy street (north), Kaszubska street (east) and Victory Square (south). The site is located in the Szczecin city centre, forming part of a complex of tightly clustered 19th-century buildings - tenement houses arranged in opposing frontages alongside the street. The entire quarter consists of seven tenement houses dating back to the early 20th century. The church of the Most Sacred Heart of Jesus, erected in 1911, is located in the immediate vicinity of the tenement house, on the opposite side of św. Wojciecha street. Behind the church stretches the General Anders Park - the site of the former military cemetery (Alter Militär Militärfriedhof) which had once formed part of the Wilhelm Fort complex and where the bodies of French prisoners of war who died during the 1801/1802 campaign in Szczecin were interred.

The design of the tenement house bears the hallmarks of the branch of the Art Nouveau movement known as the Vienna Secession, as evidenced by the use of simple shapes, stylised Classical forms, lavish architectural ornamentation based on the use of sinuous, flowing lines as well as the overall symmetry of the design. The four-storey building features a complex of mansard roofs supported by a wooden truss; the roof above the middle section of the front building is a two-storey structure, whereas those covering the side and back buildings are of a one-sided, asymmetrical design. The roof surfaces are clad with ceramic roof tiles; some of them - those where the roof is nearly flat - are covered with roofing felt instead. A basement extends under the whole building. The tenement house was designed on a rectangular floor plan and consists of the front building, two side buildings and one back building, all of them interconnected and positioned so that their outer walls run alongside the boundaries of the plot of land on which the building stands, surrounding an internal yard within. The basement level stretches not just beneath the buildings, but beneath the surface of the yard as well. The tenement house is a brick structure with ceramic brick infill ceilings. The façades of the main building are covered with cement-lime plaster; the tall socles of all the façades overlooking the inner yard are clad with ceramic tiles, much like the walls of the gateway leading into the yard. The building features a large number of surviving original wooden doors and windows. The tenement house has three winder staircases - the representational main staircase in the second suite of rooms inside the front building as well as the two staircases positioned in the corners between the side buildings and the back building. The side buildings and the back building feature a one-and-a-half-bay and a single-bay interior layout respectively. All of the façades are lavishly designed, featuring a highly original architectural décor. The front façade, positioned in parallel with the eastern frontage of św. Wojciecha street, is a symmetrical design, following an eight-axial layout on the ground-floor level and a six-axial layout on all the upper levels, its overall composition dominated by vertical divisions. A pair of three-storey oriels crowned with flattened, bulbous roofs projects from the middle section of the front façade, running alongside the two penultimate axes thereof. Loggias with projecting balconies are positioned alongside the two outermost axes, on all levels except the ground floor. The ground floor level features a pair of gateways with semicircular transom lights and decorative grillwork, flanking the middle axis of the structure. Behind the gates lies a small common area reminiscent of a vestibule; once there, one may proceed to the inner yard or to the main staircase through separate passages, recessed in relation to the outline of the walls of the main building. Both of these passages are separated by the doorkeeper’s room. The middle, four-axial section of the front façade is crowned with a gable in the form of a stylised tympanum, above which an octagonal steeple rises from the roof ridge, accentuating the symmetry of the entire design. The windows, loggias and balconies in the front façade vary in shapes and sizes, with most of them featuring rounded corners. The wall surfaces feature a smooth plaster finish, with the two lower stories, the gable as well as the section above the uppermost windows of the four-axial middle section being adorned with rustication in the form of faux quoins. The entire front façade is adorned with lavishly designed ornamental and sculptural decorations consisting of foliate scrolls and bands, volutes, ornamental wreaths as well as zoomorphic motifs in the form of eagles and gargoyles (Medusa’s heads). The entire décor is supplemented by various cornices, window surrounds, friezes, plaques and escutcheons, including a sun dial incorporated into the top section of the tympanum. The Art Nouveau design of the front façade is additionally emphasized by the elaborate window divisions; most of the windows consist of three casements each, with the lights above the transoms subdivided into smaller panes by the flamboyant, sinuous muntin bars. The dominant design feature of the façades overlooking the inner yard are the horizontal divisions defined by a dense arrangement of windows and horizontal cornices; the windows of the first three storeys are framed with decorative surrounds. The wall base is clad with glazed ceramic tiles, while the rest of the walls features a plaster finish, with the ground-floor level plasterwork being also partitioned with friezes and rustication, terminating at about mid-height of the storey. The façades of the side buildings are graced by two vertical rows of stacked balconies with openwork cast iron balustrades adorned with lavishly designed whiplash lines. The surface of the inner yard is fully covered with ceramic tiles, with a small, two-tier stone fountain positioned in the middle. The entire building was predominantly a residential structure, even though the entire ground floor section of the back building, with its enormous windows, was originally occupied by a currency exchange most likely operated by the building’s owner; during the postwar period, the premises were taken over by a CEZAS (Educational Supply Central) depot, while today they serve as a painter’s atelier and gallery. A second gallery, a music store and an antiquities store occupy the premises located on the ground floor of the main building.

The main building follows a two-and-a-half-bay layout, with the side buildings and the back building featuring a one-and-a-half-bay and a single-bay interior layout respectively. Originally, the tenement house had 14 apartments; today, however, their number has increased twofold due to the postwar practice of subdividing them into smaller units. Inside, the building features numerous period fixtures and fittings, including the original wooden doors and windows, Art Nouveau door and window fittings, stucco ceiling decorations (which are also present inside the staircases), tiled floors, ceramic tiles in the former bathrooms and kitchens, marble steps inside the staircases, decorative balustrades as well as stained glass windows in the former bathrooms.

The building is open to visitors (with the exception of the residential sections thereof).

compiled by Beata Makowska, Regional Branch of the National Heritage Board of Poland in Szczecin, 25-11-2014. 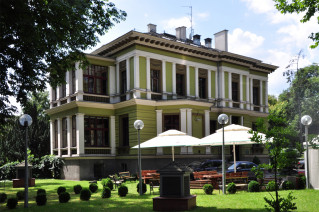 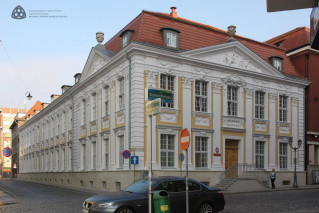 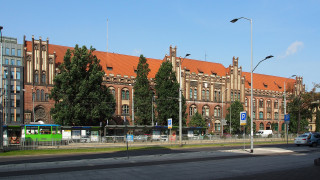 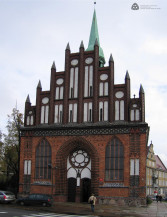 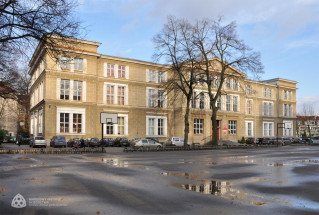 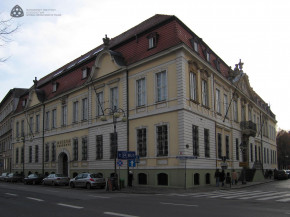 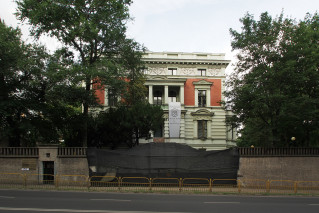 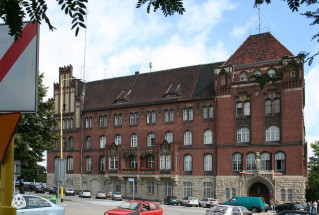 Royal Presidium of the Police Force, currently the building of the Voivodeship Police Headquarters 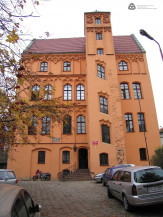