Szamocin is an example of a small 18th century town with a well-preserved urban layout, which developed from a former village owned by nobility with medieval origins. It is among the youngest towns in Greater Poland. The origins of the city are related to the development of craftsmanship, as the city was an important cloth-making centre. The earliest information on the use of steam machine in Greater Poland come from Szamocin.

The earliest mention of Szamocino village dates back to 1364. In the 15th century, it first belonged to the Nałęcz Jaktorowski, and then Grocholski family, from 1621 until 1717 - Baranowski, and from 1717 - Bętkowski family. Only in the 18th century, the development of the cloth-making industry managed to create conditions required for the establishment of a city. A cloth-making guild had operated in Szamocin from 1744, before it became a city, under a charter granted by the then owner - Józef Bętkowski. In the charter, the owner provided the settlers with plots of land and materials for construction of houses, as well as a six-year tax exemption, among others. On 29 November 1748, upon J. Bętkowski’s request, king August III issued a municipal charter for Szamocin. The city was granted a charter for eight fairs and a tax exemption for eight years. In 1750, J. Bętkowski sold Szamocin to Leon Raczyński, the castellan of Santok. The new owner continued the settlement project, intending to make Szamocin a significant urban centre (among others, in the 1750s, he granted a charter for the so called New City, also known as Filipsberg - currently Wolności Square), however this did not yield expected results. In the 1760s, a project was initiated to build a causeway passage across the Noteć valley, between Szamocin and Białośliwie. The new road was intended as a trade route connecting Greater Poland with Krajna and Pomerania, and was supposed to increase Szamocin’s significance.

During the first partition of Poland, Szamocin came under the Prussian rule. At the time, the city had a population of 336, including 50 craftsmen (36 cloth-makers). Already in 1783, there were over 700 people who lived in 66 houses. In 1787, the number of cloth makers reached 82. At the beginning of the 19th century, the population exceeded 1000 people, which was related to a significant inflow of German colonists in that period. In the years 1807-1815, Szamocin belonged to the Duchy of Warsaw, and from 1815 - to the Grand Duchy of Posen.

Due to the flourishing cloth-making trade in the late 18th century, the owner of Szamocin, Filip Raczyński, began further development of the town. To that end, in 1801 he issued a charter which facilitated the purchase of building plots and settlement at the street which led towards the Noteć river, later named Filipa Street. Before long numerous cloth-makers settled in the town. According to other sources, a similar street - Michaliny Street, was also created around the same time.

1816 saw the beginning of the collapse of cloth-making craft, which could not compete with the burgeoning factory production. Some cloth-makers emigrated to the Congress Kingdom of Poland. Meanwhile, trade (mainly in livestock) started developing, which saved Szamocin from stagnation despite the crisis of cloth-making. A brick Protestant church was constructed in 1827, and an Evangelical parish was established in 1835. From the 1830s, we have information on the use of steam machines in the local sawmill, mill, and fulling mill. In 1840, Szamocin was destroyed in a fire. Road investments made at that time had a big impact on the city. In 1853, the causeway towards Białośliwie was paved, and in the years 1847-53 a new road connected the causeway with Margocin and Chodzież. In 1861, a newly built road from Margonin to Wągrowiec provided a convenient connection with Poznań. However, it was the advent of rail which proved crucial to the development of Szamocin: in 1851, a railway passing through the nearby Białośliwie was opened, connecting Piła with Bydgoszcz. In the second half of the 19th century, Szamocin experienced a significant trade development, especially in timber trade. Simultaneously, there was a series of communal investments: such as paving of the Market Square in 1863, and in the years 1867-85 - also of Margonińska, Michaliny, and Sądowa Streets. Around 1880, timber trade collapsed, which together with the construction of a railway line from Poznań to Piła had a negative impact on the city, and benefited the nearby Chodzież at Szamocin’s expense. A positive effect, in turn, was brought about by a project of a railway line from Chodzież to Gołańcz (1901). The line was opened in 1908, after the construction of a railway station and Dworcowa Street in the preceding year. In the first decade of the 20th century, the town saw the creation of, among others, a slaughterhouse, dairy, sawmill, and a printing house. The Evangelical church was endowed with a two-tower façade, which became the symbol of the city. A Catholic church, which was built in 1906, was raised to the rank of a parish church in the interwar period. The population exceeded 2,000.

The former village of Szamocin was situated on poor quality soil, at the foot and on the slope of the southern side of the Noteć valley, at the road from Kcynia to Chodzież and Ujście, which runs along the Noteć river. The second road, connecting Wągrowiec and Morgonin with Krajna, has a later, 18th century origin.

The preserved spatial layout of Szamocin matches the layout from the end of the 18th century, as shown on Schroetter and Engelhardt’s map. It is an irregular layout, elongated along the south-west and north-east axis, comprised of many interconnected spatial elements.

The oldest element of the layout is a former manor house situated on a hill, not far from a forking road to Chodzież and Margonin, in the south-western part of the town. The manor house is located on the elongated axis of the town’s layout, separated by a depression and a ditch, which cuts across wetland meadows. The most prominent spatial feature of the city is the elongated Wolności Square, which slopes slightly to the west and north-west. Its southern frontage adjoins the slope, while the northern one neighbours the depression which runs through the wetland meadow. In the middle of the square, there is an Evangelical church with neo-Roman and Classicist features. The plots on the southern side are shallow, limited by the street which runs at their back, on the northern side - deep, reaching the meadow (these plots used to belong to cloth makers). The road to Chodzież takes its start in the south-western far side of the square. Also on the west, there is Dworcowa Street, which was created in 1907. The square narrows down towards north-east. Its southern frontage gives way to Kościelna Street on the east, which turns up in the direction of a neo-Baroque Catholic church, situated at the end of the street. The northern frontage of Wolności Square turns into the market square’s frontage via a short street.

The market square has an irregular, triangular shape, widening towards north-east. From the north, it turns into Paderewskiego Street, which constitutes the mouth of the road leading to Noteć (former causeway through the valley to Białośliwie), from the north-east - into Haller Street, whose southern frontage forms an extension of the market square frontage. Both fragments of the frontage are separated by 19 Stycznia Street, which connects the Market Square and Kościelna Street.

The above described layout was created in its first phase by a vigorous transformation of the former village into an urban settlement, later - by adding subsequent squares or widening streets forming shapes resembling squares. The elements which date back to the former village are the irregular triangular Market Square (former crossroads) and the streets located on its southern side. The later, urban phase of development saw the construction of the regulated north-western frontage of the Market Square.

Wolności Square was most probably created after Szamocin received municipal rights, during the period of Leon Raczyński’s grand plans (after the middle of the 19th century). The Evangelical church, which stands in the middle of the square, was originally surrounded by a cemetery, which was later moved outside the town.

Further elements of the layout were created during the period of Filip Raczyński’s activity (in the years 1801-02). During the time, the following streets were created: Filipa, as an expansion of the former local road (near Paderewskiego Street and its extension - Marcinkowskiego Street as well as the widening Michaliny Street which further turns into a road to Kcynia (near Hallera Street). The plots at the Filipa Street have an elongated shape, typical of cloth makers’ plots, while the shallower plots on both sides of Michaliny Street were most probably intended for craftsmen of other specializations or traders. At the listed streets and square, there are preserved brick buildings, mostly single-storey, from around the half of the 19th century.

compiled by Krzysztof Jodłowski, Regional Branch of the National Heritage Board of Poland in Poznan, 28-11-2014. 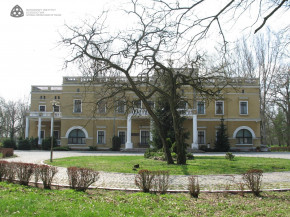 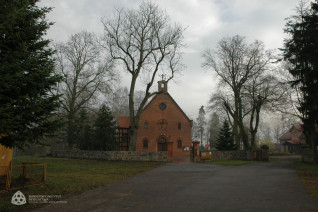 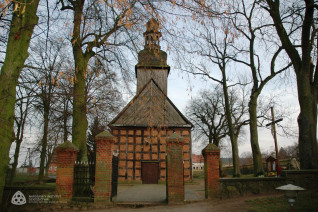 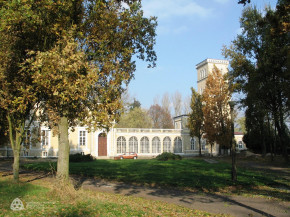 The church of St Peter and Paul 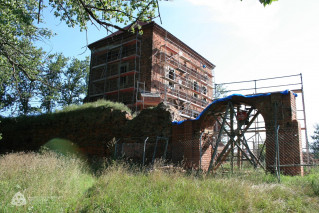 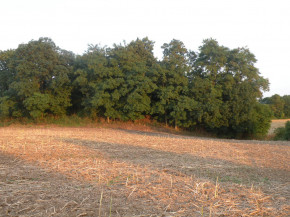 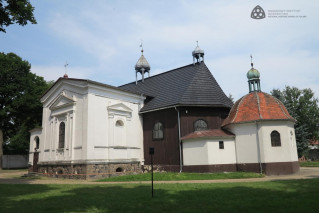