The parish church of St James

The existing parish church of St James, exhibiting a mixture of Gothic and Baroque influences, was erected on the site formerly occupied by a Romanesque pillared basilica from the first quarter of the 13th century, the remnants of which can still be seen inside the church tower. A pre-1145 sculpture of a lion was embedded in one of the buttresses supporting the walls of the tower.

According to local tradition, the first church ever to be erected here was founded in 115 by Piotr Włost. The first mentions of a local parish, maintained by the Augustinians from Wrocław, date back to the year 1250.

The existing church of St James, exhibiting the features of both the Gothic and Baroque styles, was erected on the site formerly occupied by a Romanesque pillared basilica of the Blessed Virgin Mary from the first quarter of the 13th century; the basilica, devoid of towers of transept, featured a chancel terminating with a semi-circular apse, adjoined by a sacristy. Apart from the wall base and outlines of the pillars concealed beneath the floor of the current church, a part of the building’s gable wall, about 4 metres in height, has been preserved, forming part of the lower walls of the tower.

Once the Romanesque basilica was demolished, the construction of the brick church of St James, designed in the Gothic style, began somewhere around the year 1500. The original design called for a three-nave hall layout with three polygonal end sections towards the east. In the end, however, all that was erected was the main nave and the northern aisle - with ribbed vaults and walls reinforced with buttresses - as well as the tower, which was subsequently extended upwards in the years 1606-1608. In 1633, during the Thirty Years’ War, the church was plundered and set on fire. It was reconstructed in the years 1662-1667, with a new, wooden ceiling, southern porch and taller tower with an octagonal top section. In 1706, a sacristy was erected alongside the southern wall of the chancel, while the tower was renovated and extended further upwards in 1722. In 1730, the church suffered extensive damage during the great fire that swept across Sobótka - an event commemorated on an inscription plaque above the northern portal. Another inscription plaque, positioned above the southern portal, commemorates the reconstruction and Baroque redesign of the church in 1739. It was then that the southern aisle was added, with the chancel walls being extended upwards in order to create spatial links between the chancel and the main nave. The interior received a new vaulted ceiling of the sail type, while an organ loft was constructed in the western bay of the nave. The side aisles received new, mono-pitched roofs, while the tower was now crowned with a Baroque cupola. After the cupola was destroyed during a thunderstorm in 1839, the tower was restored in the years 1855-1857; one year later, in 1858, a new pyramid roof, designed in the Gothic Revival style by an architect named Herrman, was added. The church was renovated on numerous occasions in the years 1903, 1931 and 1932-1937. In 1945, the roof of the church, the vaulted ceilings above the nave and aisles, the southern portal and some of the fixtures and fittings sustained damage. In 1949, the nave ceiling has collapsed, leading to the destruction of the pipe organ from 1873, made by the Schlag & Söhne company from Świdnica. In the years 1948-1949 K. Maleczyński and J. Hawrot conducted archaeological surveys of the site, leading to the discovery of the remains of a Romanesque basilica underneath the floor of the existing church. In 1957, the reconstruction of the church began, with the walls being reinforced and new vaulted ceilings above the nave and northern aisle installed. The external plasterwork was likewise subjected to renovation works, while the roof truss and cladding was built from scratch. A stone wall dating back to the first quarter of the 13th century can still be seen in the ground floor section of the tower, beneath the organ gallery. The works were completed in 1960, with the church being reconsecrated on October 20, 1961. In the years 1969-1975 the interior fixtures and fittings were subjected to renovation works, with roof repairs following in 1975. In the years 1998-1999, stained glass windows were installed in the window openings of the chancel and the side aisles, their design created by rev. C. Mazur.

The walls surrounding the church cemetery, which remained in use until the year 1818, has survived in an unchanged form from the 16th century until 1848, when it was partially lowered and dismantled.

The church, surrounded by a cemetery, is located in the most elevated spot in town, standing on the top of the hill positioned at the fork of the former route leading from Dzierżoniów to Wrocław. The silhouette of the church dominates the surrounding landscape, forming a terminating vista of the northern part of the market square which had originally served as the centre of the town’s commercial life.

The church itself is a three-nave, four-bay basilica oriented towards the east, designed on a rectangular floor plan with a chancel terminating in a polygonal end section. The church also features a distinct northern aisle and a quadrangular tower topped with a slender spire. The sacristy with integral staircase in its eastern section is positioned at the extension of the southern aisle. Another staircase is located inside a polygonal turret occupying the corner alongside the southern wall of the tower. Two further, similar staircase contained within cylindrical turrets are located in the corners where the walls of the tower and the side aisles meet. The tower, the northern aisle and the chancel are all reinforced with buttresses. The nave is covered with a gable roof clad with ceramic roof tiles, flowing seamlessly into a multi-pitched roof above the chancel. The side aisles feature mono-pitched roofs. The façades are adorned with decorative framing formed by lesenes and a crowning cornice. The windows are framed with decorative surrounds; the entrances into the aisles and the tower lead through Late Baroque portals surmounted by plaques commemorating the important events from the history of the church. A number of headstones from the church cemetery are embedded in the ground-floor level walls of the tower, while one of the buttresses which support the walls of the tower features a projecting granite sculpture of a lion, made before the year 1145.

Inside, the church features sail vaults, with the individual bays separated by structural arches supported by semi-circular arcades running between the nave and the side aisles. Some of the original stucco decorations from the Baroque period has survived intact and can still be admired inside the church. A cartouche bearing the IHS monogram is positioned on the vaulted ceiling above the chancel. Another cartouche, incorporating the image of the Lamb of God, an Augustinian monogram and the date 1738, is embedded in the western wall of the main nave. The Baroque main altarpiece, dating back to ca. 1730, incorporates the painting of St James, created in 1770 by F. A. Felder; the side altarpieces, designed in the Late Baroque style, date back to the years 1730-1740; there is also a Mannerist pulpit from the second quarter of the 17th century. A Mannerist figural tomb effigy commemorating Salmena Feder (who died in 1602) is embedded in the wall of the northern aisle; a Baroque epitaph plaque from ca. 1700, dedicated to Wolf henryk von Haugwitz and his wife Helena M. von Haugwitz née Gladis likewise adorns the wall of the said aisle. Remnants of the western gable wall of the now-vanished Romanesque basilica can still be seen in the ground floor section of the tower, beneath the organ gallery.

The church is surrounded by the former cemetery, partially circumscribed by a stone wall; the section of the wall running alongside Kościuszki street also performs the role of a retaining wall. A stone pedestal which had once supported the now-vanished equestrian statue of general Ludwig von Lützow is situated alongside the north-eastern section of the wall.

A stone crucifix from the 1st half of the 18th century stands in front of the northern façade of the church, while a Corinthian column dating back to the year 1720, surmounted by the sculpture of the Virgin Mary of Immaculate Conception from the late 19th century, stands against the background of the southern façade. The column had once been surmounted by a different statue - a Pietà which has since been relocated to the Silesian Museum.

compiled by Beata Sebzda, Regional Branch of the National Heritage Board of Poland in Wrocław, 09-30-2014. 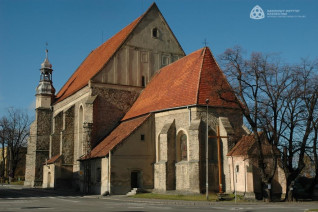 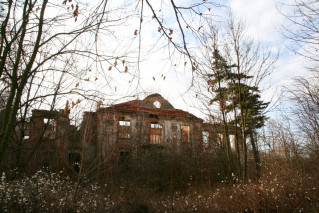 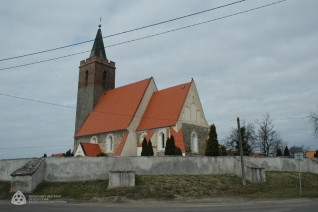 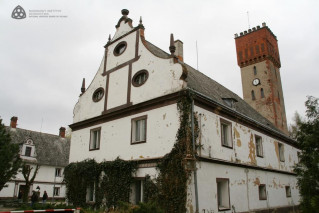 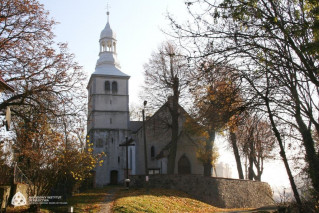 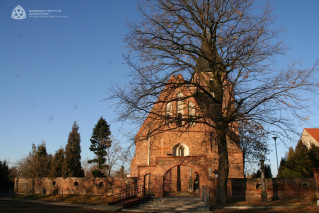 Parish church of the Ascension of Christ

The parish church of St Margaret