The palace in Smolice has a neo-Baroque and Classicist form of the imperial, Wilhelmian variety. The above is evidenced by the overall composition of the complex, exquisite detail of the façade, and most of all, the décor of the representative, lavishly decorated and fitted interiors. This impressive palace is designed in harmony with the surrounding park and the nearby church complex.

In 1233, Duke Henry the Bearded granted the ownership of Smolice to Hugon of the house Łodziów. In 1258, the village belonged to the Benedictine monastery from Lubiń. In the 15th century, Smolice was owned by Sokołowski and Bnińscy families, known as Smolicki. Then, the village went in turn into the hands of Siedlicki, Konarzewski, and Siewierski families, and around 1618 it became the property of the Rogaliński family. The next owner of Smolice was Antoni Umiński, Roman Rogaliński’s son-in-law, who bought it in 1746. Thus, Smolice became the property of the Umiński family. The last owner of Smolice from this family was general Jan Nepomucen Umiński, up until the estate was confiscated by Prussian authorities in the early 1830s. In 1860, Erazm Stablewski became the new owner of Smolice, however his son Władysław sold his estates to Samson Woller in 1875. At the turn of the 19th century, Woller built for himself a new brick palace, in place of the old wooden manor house. After Woller’s death in 1900, the estate was inherited by his two daughters - Helena and Otylia, who divided the inheritance among themselves in 1901. Helena, who had been married to Count Leopold von Ziehten from Nysa since 1893, inherited Smolice, Raszewy, Wilkonice, Krzekotowice, Płaczkowo and Czeluścin, and Otylia, the wife of Duke Drucki-Lubecki, received Dłoń, Kołaczkowice, Melanowo, and Piaski. After 1901, the palace was rebuilt and extended. Around 1910, after the demolition of the old church which stood next to it, the palace was extended by the north-eastern part, probably designed by Roger Sławski, and thus acquired the shape of an L. Also, there were two corner, fortified towers added to this part. Helena, being of Jewish decent, ran away from Smolice from the Germans in 1940. Her ashes were buried next to her husband in 1975, in the church she founded in Smolice. In 1951, Smolice was given to thePlant Breeding and Acclimatization Institute in Radzików. A breeding and research station was established, and transformed into an Experimental Station in 1956. Since 2000, there is a seed company of the Plant Breeding and Acclimatization Institute Hodowla Roślin Smolice.

Smolice is located approx. 5 km west of Kobylin, and approx. 23 km west of Krotoszyn, by the national road Ostrów-Lubin and closed railway line Kobylin-Rawicz. The palace and park complex is located in the south-eastern part of the village. The palace is situated in the north-western part of the landscape park, which can be accessed through 5 decorative entrance gates and one gate leading to the churchyard. The gate intended for the eyes of guests leads to the front of the palace.

The building’s façade faces south-east, and there is a large, circular flower-bed in the front. The palace was originally built on a rectangular floor plan with a tower and a lower, north-western part which houses a kitchen, covered with a terrace, which was rebuilt in neo-Baroque style after 1910. Its façade faces south-west, and the main entrance was situated next to the tower. The subsequent extension gave the palace the shape of an L. The palace was extended by a four-axe, north-eastern part, which features a representative hallway, hall, drawing room, offices, and staircase. The one-storey, north-western part was extended upward and covered with a mansard roof. Later, two fortified towers were added in the corners.

In front of the corps de logis, there is a pseudo-avant-corps, adjoined by a colonnaded portico with a passageway, covered with a terrace. In the portico, there is a passage to the hallway, which runs axially and connects with the hall, which runs longitudinally. The south-western part consists of two parts, which correspond to the subsequent stages of extension and rebuilding of the residence. It can be accessed from the west through a semi-circular, wooden porch, glazed in the top part. There are two fortified towers on the sides of the porch. The palace building is partitioned, essentially one-storey, with a basement. The corps de logis is covered with a high, hip, mansard roof, similarly to the two further parts whose roof planes merge together. The southern, three-storey tower and the three, corner, one-storey fortified towers are covered with two-storey cupolas topped with spires.

The south-eastern façade, and partly the south-eastern one, are faced with sandstone, and the remaining ones with plaster imitating sandstone. The rusticated façade adorned with pilasters has seven axes, with a shallow three-storey pseudo-avant-corps in the centre and a colonnaded portico in the front, supported frontally by paired, Ionic columns, which stand on a joint ramp. In the side porticos by the walls, there are paired columns. In the top part of the centre pseudo-avant-corps, there is a relief, sandstone cartouche with the von Ziehten coat of arms. In the upper part of the dormers, there are shell-shaped decorations. The south-eastern façade is particularly diverse. One of its elements is the north-eastern façade of the corps de logis with lavish architectural décor; it is symmetrical and has a balustraded terrace in the front, decorated with a wide pseudo-avant-corps with giant-order pilasters, topped with a single-axe gable which is divided into three panels and features lavish, relief decoration and panoplies. The south-western façade has a three-storey fortified tower, covered with a cupola with dormers in the eastern part, and two-axe avant-corps in the western part. Between them, there is a loggia covered with a terrace, and supported by Ionic columns.

The interior design dates back to the time of construction of particular parts of the residence. The palace is surrounded by a vast, English-style park from the 19th century which preserved its original design until today. The park covers an area of 18.15 ha. It features, among others, a decorative basin, fountain, two ponds, walking alleys, and a small meadow. There was also a bathing pool, levelled in 2015. In the north-eastern part of the park, there is a former gardener’s house, currently housing a kindergarten.

The palace may be visited from the outside. 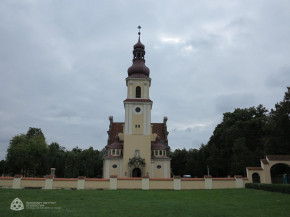 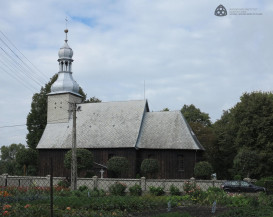 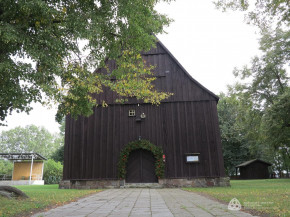 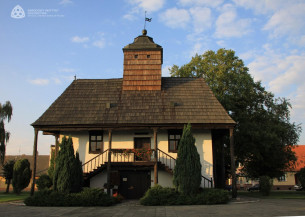 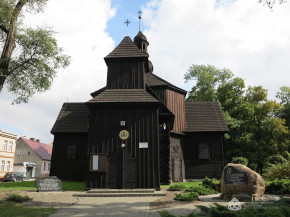 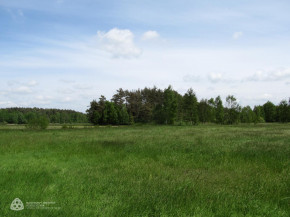 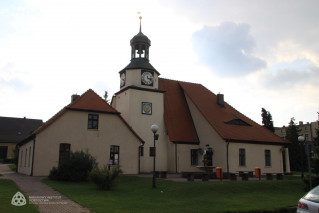 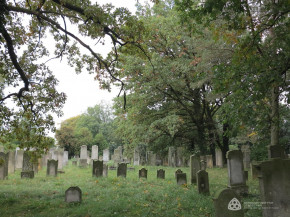