Ruins of the castle of the Cracow bishops

A well-preserved example of permanent ruins of a castle erected in the first half of the 14th century and redesigned on numerous occasions until the 18th century. The site include remnants of a medieval citadel as well as vestiges of an early modern residence of the Cracow bishops, including a 16th-century system of fortifications designed with the use of firearms in mind. In addition, the ruins are an important source of information on the history of the Silesian branch of the Piast dynasty, the bishops of Cracow as well as the Duchy of Siewierz.

In the second half of the 13th century, when the Siewierz region remained a part of the Opole-Racibórz duchy, the site of the current castle ruins was occupied by a castellan’s hillfort surrounded by an earthen rampart, subsequently destroyed during a raid of the armies led by duke Henry IV Probus (Henry the Righteous) towards the end of the 13th century. It is believed that the brick section of the castle was erected in the second quarter of the 14th century, as evidenced by the very first written mentions of the Siewierz castle, dating back to the year 1337, when the Duchy of Siewierz - along with the castle itself - was sold to the Cieszyn branch of the Piast dynasty. During that period, the castle, designed on an oval plan and consisting to the late-13th century keep and a residential building to the west, was surrounded with an earthen rampart, a moat and defensive walls, with the gateway positioned on the southern side of the complex preceded by a drawbridge. In 1443, the duchy and the castle became the property of the bishops of Cracow. From that moment onwards, the castle served as a bishops’ residence and the seat of the local alderman (starosta), judges and mayors. In the 1480s, the gatehouse with a drawbridge was erected on the northern side of the complex, replacing the former southern gate. In addition, a single-storey building was added in the eastern part of the complex.

In 1518, the northern part of the castle was reinforced, with a new fortified tower known as the Magnates’ Tower, designed with the use of firearms in mind, was erected above the existing entrance gate, with the moat being widened and earthen revetments being added in front of the castle walls. In addition, a two-storey building designed for the local alderman was also erected in the eastern part of the complex. In the 2nd quarter of the 15th century, during the times of bishop Piotr Tomicki, the castle was redesigned in the Renaissance style, with the construction works being carried out in parallel with those in the Wawel castle in Cracow. The 13th-century keep was demolished, as was the southern section of the defensive walls; a new, representational two-storey building was erected on the site thereof, its two wings incorporated into the inner ring of defensive walls. The outer ring of defensive walls connected the new structure with the Magnates’ Tower and the eastern building which served as the seat of the local alderman. Further alteration works were performed at the initiative of successive bishops’ right until the year 1575. In the 1530s, the wings of the castle were extended upwards by a single storey, their façades on the courtyard side now featuring wooden exterior galleries. The façades were redesigned in the Renaissance style. In the 1570s, the fear of possible invasion during the interregnum led to the construction of an additional, outermost ring of defensive walls, linked with a pair of fortified towers to the south and a roundel-shaped barbican to the north.

In the third quarter of the 17th century, the castle was reconstructed following the Swedish invasion. Its walls were extended upwards, forming a convenient platform for artillery. The most recent major remodelling of the castle took place in the late 17th/early 18th century. During that period, the eastern wing with the chapel was added, as was the grand staircase and arcaded loggias projecting from the southern façade of the fortified tower. The rooms in the western wing were remodelled, while the fortified tower itself was extended upwards and received a new, Baroque cupola. Later on, however, the condition of the castle continued to deteriorate due to the political and economic crisis during the 18th century. In the late 18th century, when the town was incorporated into Prussia and when the bishops of Cracow left Siewierz for good, the castle began to serve as a sloth manufacturing plant. After 1807, when the Duchy of Warsaw was formed, the complex was abandoned and a gradual descent into a state of ruin has begun.

The castle ruins are situated in the south-eastern part of Siewierz, in a lowland area near the Czarna Przemsza river wetlands to the north, on a terrace surrounded by remnants of a moat. The main entrance into the castle, preceded by a reconstructed drawbridge spanning the moat below and protected by a round bastion, is positioned on the northern side of the complex.

The castle, preserved in the form of a so-called permanent ruin, is a masonry structure made of split stone and brick, designed on an irregular plan consisting of several distinct sections. Until the 19th century, the castle comprised four three-storey, single-bay wings surrounding a quadrangular courtyard, their walls reinforced with buttresses. The dominant feature of the complex is the five-storey northern fortified tower designed on a square floor plan, its upper sections being hexagonal and octagonal in shape. The fortified tower is surrounded by remnants of the now-defunct defensive walls which form the so-called bulwark.

The external façades of the western and eastern wings, erected during the 16th century and incorporating sections of earlier defensive walls, feature remnants of profiled stone surrounds designed in the Renaissance style. Only the ground-floor level of the south wing of the castle has survived to the present day. The ground-floor level of the tower incorporates a gateway with a vaulted ceiling of the barrel type (with lunettes), preceded by portals to the north and the south, while the upper parts of its walls are pierced with loophole embrasures. Remnants of a so-called dry basin survive beneath the vestibule. In the north-western corner of the courtyard there are remnants of a three-storey Renaissance loggia, supported by stone columns.

The barbican adjoining the fortified tower, designed in the form of a roundel, is a two-storey stone structure with casemates, erected on a rectangular floor plan with a semi-circular northern end section, two rows of embrasures in its side façades as well as an entrance portal at the courtyard level, linked to the reconstructed drawbridge to the north.

The historic monument is accessible to visitors. It can be visited during the opening hours of the museum.

compiled by Agnieszka Olczyk, Regional Branch of the National Heritage Board of Poland in Katowice, 16-10-2014. 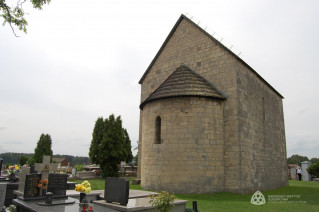 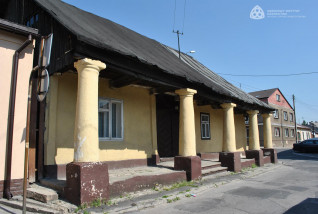 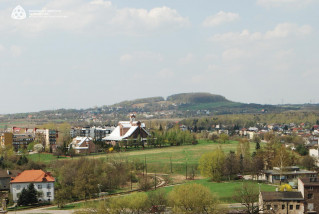 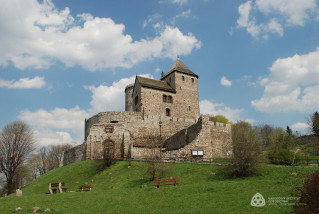 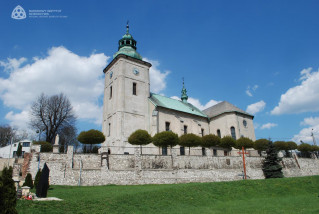 The Parish Church of the Holy Trinity 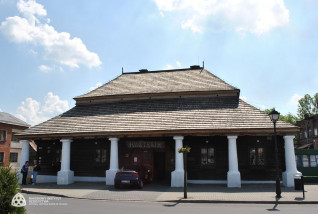 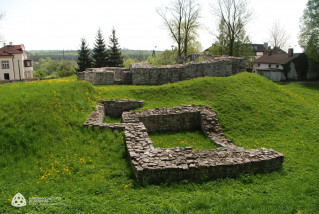 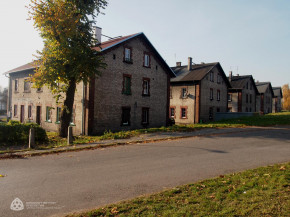