The monument is one of the most valuable historic complexes in Rzeszów. It is pioneering example of a Baroque architectural and urban complex throughout Poland. The interiors of the church and monastery are distinguished by rich architectural décor; the monastery boasts the oldest wall paintings in Rzeszów.

In 1642-1646, the church and monastery intended for Benedictine nuns were founded by Zofia Pudencjana, the Ostrogska-Zaslavska Duchess, and built according to a design by Jan Gangerli. Stucco ceilings decorations in the church were made by Goivanni Battista Falconi. In 1654 and 1655, the convent was transferred by Jerzy Sebastian Lubomirski to the Piarist Order. Around 1695, Father Łukasz of the church of Saint Pantaleon made lavish painted decorations in the ground floor interior. Between 1703 and 1707, on the initiative of Hieronim August Lubomirski, the structure was altered and extended according to a design by Tylman van Gameren. Construction works were led by Piotr Belotti. At that time, both church towers were erected, a new college building north of the church and the porch underwent alterations. In 1738, Father Stanisław Konarski was a teacher at the college. By 1740, the church was the seat of a court's parish. After the dissolution of the Piarists in 1786, the church was converted into a lower secondary school church, and the collage served as a government lower secondary school, while the monastery was used as the starosty office, German folk school, pharmacy and flats. During the 1870s, the northern and eastern wings were added to the college building. In 1956-1957, the former monastery was adapted to house the Regional Museum. Between 2003 and 2007, the former college and the façades of the church and former monastery underwent full-scale repairs, renovations and conservations.

The Bernardine monastery complex in Rzeszów consists of the church of the Holy Cross, monastery — currently the Regional Museum in Rzeszów, college — currently the 1st Konarski Upper Secondary Comprehensive School and fence. It is located in 3 Maja Street, former Pańska Street, connecting the old town complex and the parish church to the castle. The church is oriented towards the east; the former monastery is located south of the church, and the former Piarist college to the north. East of the complex, there are two corridors connecting the former monastery to the twentieth-century museum buildings.

The church is a parish church designed in an early Baroque style, consisting of a single nave, and built on the floor plan in the shape of two rectangles, with a three-bay nave and a narrower chancel enclosed by a straight wall. To the west, on both sides of the nave, there are square towers; north of the chancel, there is a rectangular sacristy. The sacristy and the nave adjoin an eight-sided chapel. The chancel and the slightly narrower nave are covered with steep gable roofs, whereas the chapel is topped with a multi-hipped roof with a lantern. The towers of height equal to the roof ridge above the nave are surmounted by bell-shaped cupolas.

The church was built of brick. The walls are covered with plaster. The roofs are clad with copper sheet.

The front façade of the church features two symmetrically arranged towers and a gable in the middle; it is divided into two parts with a pronounced cornice with entablature. Vertical partitions are made with six pilasters turning into lesenes over the cornice. The main entrance door on the central axis are framed by a portal with a divided arched pediment and cartouche bearing an inscription in the middle. On the sides, there are symmetrically arranged doors to the towers with similar narrower portals with carved busts of Madonna and Christ. In the fields between the portals, there are niches topped with semicircular arches, containing the statues of Roman emperors. The façade over the cornice on the central axis is pierced by a rectangular window; on the sides there are octagonal windows. The top storey of the gable and towers feature rectangular windows topped with semicircular arches, with window sills in the form of blind balustrades. The gable is surmounted by a triangular finial and characterised by side volutes. The south façade is pierced by windows topped with semicircular arches. The northern façade was extended by the addition of a chapel covered with a multi-hipped roof and surmounted by a lantern. Next to it, there is a one-storey porch with rectangular windows, above which there is a semicircular nave window. The eastern façade above the cornice featuring a gable with four lesenes and narrow cornices is crowned with a triangular tympanum with side volutes and an oval window. Below, there is a rectangular window topped with a semicircular arch.

The nave is covered with a barrel vault with lunettes, the chancel with a trough vault with lunettes, and the sacristy with a barrel vault. The walls are partitioned with pillars with composite capitals supporting a pronounced entablature. The vaults are lavishly decorated with stuccowork by Goivanni Battista Falconi. The door portal to the sacristy is designed in Renaissance style, surrounded by chambranle, with a cartouche bearing a coat of arms in the lintel. The chapel of St. Joseph is opened to the nave by a semicircular arcade. The chapel interior is divided by arcaded niches with side entrance doors to the sacristy and the pulpit, at the top of the window or niche. The choir is a three-wing bent structure with the central part covered with vaults.

The interior fittings dating from the 18th century include Rococo main and side altars and organs, pulpit in Regency style, marble grave sculpture of Jerzy Ignacy Lubomirski and 9 epitaphs of the Lubomirski family, 2 founder’s pews, 5 confessionals and pews for the faithful. The tower cloak dates from 1701 and the bell from 1683.

The monastery, currently a museum, was built on a rectangular floor plan and is composed of four wings surrounding the rectangular garth. The wings are single bay; on the ground floor on the side of the garth, there is a former arcaded cloister; on the upper storey there are corridors. The eastern wing extends beyond the church chancel. The wings are multi-storey; in the southern part there are two deep avant-corps as extensions to the eastern and western wings. In the west wing, on the courtyard side there is an avant-corps housing a staircase. The wings and avant-corps are covered with four-, three- and double-sloped roofs.

The building is made of brick and plastered; the roofs are clad with copper sheet.

The front façade is characterised by a three-axial faux avant-corps with arcaded niches on the ground floor, pierced by the entrance doors and windows, decorated with false rustication, four lesenes on the upper storey, and surmounted by a triangular gable. The storeys of the front façades and the remaining façades are partitioned with a narrow cornice, topped by a cornice with an entablature (in the front façade) and a crown moulding in the remaining façades. The windows are rectangular in shape and enclosed by surrounds.

The interior of the ground floor is vaulted: the corridors and some of the rooms are covered with barrel vaults with lunettes, the former refectory in the south-eastern avant-corps with cloister vaults with lunettes, the room in the eastern wing behind the church chancel with a trough vault with lunettes in the corners and geometric stucco decoration. The corridors and some of the rooms on the ground floor are vaulted; the remaining rooms are covered with flat ceilings. The interiors of the ground floor boast lavish painted decorations of high artistic value from around 1695.

The college, currently an upper secondary school, was built on a C-shaped floor plan. The wings were originally single-bay structures with a corridor. The northern wing was altered and extended by the addition of a diagonal annex from the 20th century; the eastern wing was extended by a corridor connected to the twentieth-century gym. The corridors and several rooms on the ground floor and upper storey of the west and north wings feature the preserved original barrel vaults and groin vaults with lunettes.

The façades are similar to those of the former monastery.

The complex is closed off with a fence on the east and south sides; to the east, the fence runs along the edge of an escarpment; it is built of crushed stone and brick. In the early 21st century, it was renovated. The lower parts may be the remnants of town fortifications.

The monument is open to visitors. Viewing of the former monastery is possible during the opening hours of the museum, formerly college, by appointment.

compiled by Mieczysław Kuś, Regional Branch of the National Heritage Board of Poland in Rzeszów, 16-12-2014. 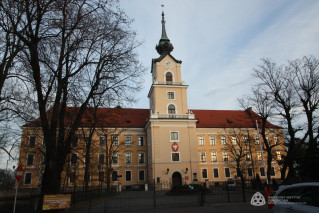 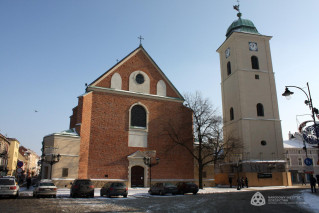 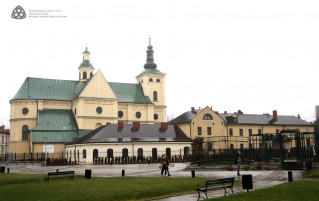 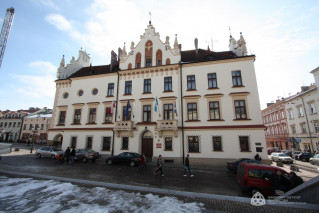 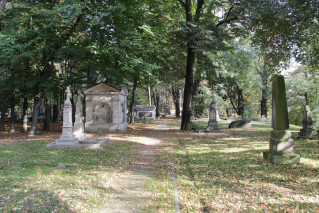 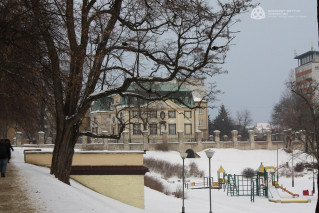 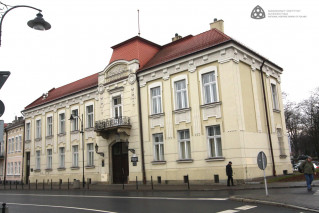 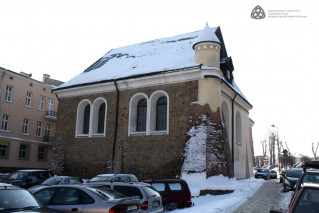