The Piotrówka hill fort in Radom (site 1) is one of the most important elements shaping the historical and cultural landscape of Radom. According to M. Trzeciecki who conducted the latest archaeological research project, “its early medieval settlement layers are a gold mine of information about the functioning of a typical administrative centre of the first Piasts. The history of the hill is also a record of the ‘golden age’ of Radom, which in the 15th-16th c. was one of the main political centres of the Jagiellonian monarchy, as well as of the period of modernisation of the country undertaken at the end of the ‘Republic of Nobles’, when one of the oldest Polish municipal cemeteries organised according the rules of the Commissions of Good Order (Boni Ordinis) was established within the area of the former fortified settlement’. The hill fort is the centre of the settlement complex dating back to the Early Middle Ages, which consists of settlements (site 2 and 3) and a settlement/cemetery (site 4).

The settlement complex in Radom was established at the intersection of trade routes from Lesser Poland to Mazovia and through Lublin to Ruthenia. The hill fort in Radom is situated in the valley of the Mleczna river. It was built on a dune surrounded by waterlogged and peat meadows. The settlement at site 2 is located to the west of the hill fort, by a river; settlement at site 3 to the north-east, around the present-day St Wenceslaus’ Church; site 4 is located about 100 metres to the east of site Piotrówka.

The Piotrówka hill fort has the form of a flat, raised area of land that is 5-7 metres in height and measures 146 metres by 36 metres. It occupies an area of over 1.5 hectares. The area of the hill fort is now an urban green area. It was marked with a commemorative stone. The area which was formerly occupied by a riverside settlement (site 2) is now a wasteland; the other two site have been largely covered by buildings.

The earliest mention of Radom dates back to 1155. The village of Sławno near Radom was mentioned in the bull of Pope Hadrian, in the annual privilage for the Diocese of Wrocław. The 13th-century sources mention four Radom castellans. In 1222, the ownership of the St Peter’s Church, from which the hill fort took its name, was granted by Bishop Iwo Odrowąż to the Benedictines from Sieciechów. The church existed most likely as early as the 11th century. 1252 saw the return of fortified settlements in Sandomierz and Radom (castrum de Radom) to the legitimate hands of Leszek the White. Before 1350 the settlement at site was granted town rights and was chartered under Środa Śląska Law, being a local variation of Magdeburg Law. Perhaps this happened simultaneously with the construction of the St Wenceslaus’ Church in the late 13th century and early 14th century. In 1364, King Casimir the Great again chartered the town under Magdeburg law. The construction of the castle, the new settlement of a castellan and administrative centre, which took over the functions of a fortified settlement, began in 1370.

Investigations of the site revealed the presence of settlement of the population of the Lusatian culture in the Bronze Age. The fortified settlement in Radom was founded on the initiative of the rulers of the first Piast state as a centre entrusted with the administration and control of new land nearly 1,500 years later. The second half of the 10th century saw the construction of ramparts, which involved lowering of the area between the line of the ramparts and the central part of the fortified settlement (phase 1). Wooden buildings appeared in the area by the rampart in the 11th century (phase 2). During the period from the end of the 11th century to the end of the 12th century (phase 3) alterations were undertaken to the fortifications, the ground level was raised near the ramparts, and residential buildings were erected at a distance of 15-20 metres away from the ramparts. In 13th century the inner part of the hill fort was levelled and the use of the zone in the vicinity of the rampart was restored. Due to the foundation of a town and relocation of the seat of power the fortified settlement was abandoned around the mid-14th century. In the 15th and 16th century the area of the hill fort was occupied by residential and utility buildings, which were probably associated with the sejms of the Crown of the Kingdom of Poland and royal family stays (phase 5-7). Between 1790 and 1812 a cemetery was locate in Piotrówka. Earth works were carried out on the site from the 19th century to the 20th century (phase 9-10).

The findings from archaeological investigations revealed that the works on the construction of the rampart were commenced after the site was levelled. Structural elements of the rampart were placed on the steps cut into the hillside. The area on the outer side was slightly lowered, but it was not a moat. It seems that the waterlogged are was a sufficient safeguard for the fortified settlement. In the first phase the rampart featured a box and sandwich structure. Two rows of wooden boxes filled with sand and earth, reinforced by a palisade (on the outer side) and pillars (on the inner side of the fortified settlement), constituted the core of the construction. On the outer side an earthen structure in a sandwich construction, built of horizontal layers of logs, with the gap between them filled with sand, was added to the palisade. In the next phase the rampart was extended from the inside, and in the 12th and 13th centuries it was extended from the outside. Further stages of extension works were not due to the rapid destruction of older phases, but rather they resulted from the instability of the ground and the increasing groundwater levels. After the hill fort had been abandoned, fortifications were intentionally burned.

During the construction of ramparts the ground level was lowered at their base on the side of the maidan. The central area remained as the highest point of the site. An archaeological investigations of the section near the rampart uncovered a regular repeated pattern, involving raising the ground level and the accompanying change in the development of the interior of the fortified settlement (see: History of the structure/dating of construction phases). In the late 11th century and early 12th century the usable level was raised by 1 metre; a channel was built to drain water. Residential buildings were erected at a distance of abour 15-20 metres from the ramparts. Archeologists discovered waste pits and a hearth/stove base in their vicinity. The density of buildings in the period under consideration coincides with the earliest mention of Radom. In the 12th century buildings were erected even closer to the rampart. Archaeologists have unearthed the remains of a building featuring a frame structure. However, in general, the traces of human activity from this period are rather difficult to identify.

Numerous finds are a testament to the significance of the fortified settlement in Radom in the Early Middle Ages. A high percentage of the remains of wild animals (including bear, auroch, sturgeon) indicates the consumption of animals, the hunting for which was a privilege of rulers. Investigations of the site uncovered numerous imports from Ruthenia. A large number of military artefacts and iron tools, traces of iron smelting and processing within the area of the hill fort indicate local production. The remains of buildings with sides measuring 5-6 metres, accompanied by stone and clay stoves, date back to the 15th-16th century. These are relics of a planned development. Relatively numerous finds, including weapons and horse riding gear, were discovered in layers associated with them, which can be linked to the material culture of the elites. Investigations of 102 graves dating from the 18th/19th century uncovered two graves, in which the dead had been buried without coffins. They were laid on their stomach with hands behind their back — once probably tied.

Archaeological investigations of settlement 2 revealed relics of at least 8 log wooden buildings, with accompanying utility structures with walls featuring a wattle-and-daub structure. Researchers also discovered three pigpens measuring abour 2 metres by 2 metres, built of laths reinforced in the corners with stakes stuck in the ground. An investigation of the vicinity of one of them unearthed a container made of one flap of bark, half-filled with acorns used as animal feed. Moreover, investigations of the area of the settlement revealed unevenly distributed wattle-and-daub fence, which has been interpreted as the remains of livestock enclosures or used to mark the boundaries of plots. Excavations of the western bank of the Mleczna river unearthed a well. Using radiocarbon dating, scientists have determined that it was built after 888. The dating and peripheral location of the structure may indicate the existence of an older settlement in this part of the valley. A wooden road, interpreted as a causeway discovered in the 1960s, crossed the area of the settlement. Recent investigations revealed the remains of the bridge linked to it. These may be the remains of a trade route. An investigation of settlement 2 also uncovered the relics of a workshop producing clay spindle whorls and a workshop for wood processing. Numerous semi-finished and finished products made of bone and horn found on the site may be proof of the existence of a horn workshop in this area. Investigations of the settlement also unearthed metal buckles, belt fittings, pendants, glass beads and rings, as well as iron sickles and half-scythe.

Settlement 3 has been investigated to the smallest extent. In the 1960s investigations of the site uncovered the remains of clay ovens, tools and a large quantity of pottery. Researchers believe that the settlement served as a marketplace, but this hypothesis needs to be confirmed.

Settlement 4 was established on the so-called ‘raw root’, which means in a place previously uninhabited. It had a regular layout, dwellings sunken in the ground were arranged in at least three rows at a distance of 10-15 metres from each other. Investigations of the cemetery founded there in the 11th century unearthed 124 inhumation graves. The dead were buried lying on their back and accompanied by quite a number of equipment. Archaeologists have found temple rings, which were a type of metal jewellery in the form of rings with open loops, worn on the head, near the temples of a woman or a girl, attached to a bonnet or a special headband, beads, rings made of bronze or glass, single clay vessels placed around the heads or legs of the deceased, iron knives near skeletons of men. One grave was different from the others. A skeleton without equipment was lying face down under the pavement made of fieldstones. It can be inferred from the position in which the body was lying that the dead was most likely tied before death or burial.

The site, which is located near the western end of Piotrówka Street, is now a green area open to visitors. It can be accessed by a green tourist route from the market square.

Compiled by Agnieszka Oniszczuk, National Heritage Board of Poland, 16.06.2015 r. 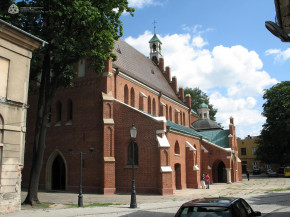 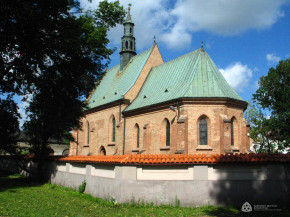 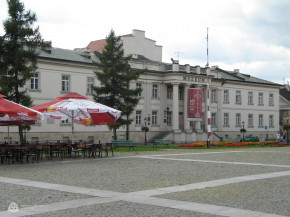 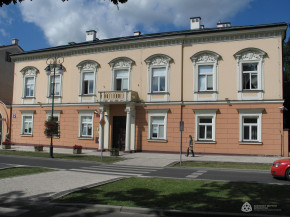 The building of the former Freemasonry Lodge, currently the Regional Public Prosecutor's Office 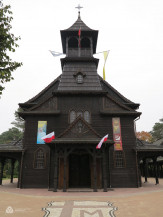 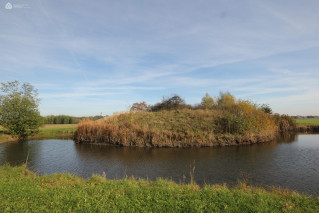 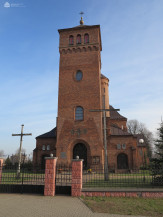 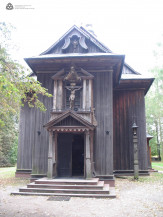