The ruins of the Ogrodzieniec castle are one of the most valuable and best-preserved, authentic residential and defensive complexes in the entire Cracow-Częstochowa Upland, forming part of the line of defence created along the erstwhile Polish-Silesian border by Casimir the Great. The structure, comprising both the remnants of a medieval highland castle and an early modern fortified residence of the Boner noble family - one of the most eminent magnates of their times - continues to exist in collective consciousness as one of the most impressive castles of the Cracow-Częstochowa Upland, serving both as a silent witness of the ages and as a national symbol.

During the period between the 12th and the 13th century, Ogrodzieniec, located between the Lesser Poland (Małopolska) region and Silesia, served as a fortified settlement. It is believed that a wooden hillfort may have existed on the site of the present castle back in the 14th and the 15th century. In the late 15th/early 16th century, this hillfort was lost to the blaze and was subsequently replaced by a masonry structure, perched atop the rock outcropping where the eastern wing of the current structure now rises; later on, it was extended through the addition of a new, southern section, a wall with the southern fortified tower as well as an unidentified fortified structure which stood on the site of the current Kredencarska Tower. The first owners of the castle were the members of the Włodek family of the Sulima coat of arms, who extended the castle during the 15th century. In the years 1533-1547, the medieval castle was transformed into a Renaissance residence at the initiative of Seweryn Boner. In the course of extension works, a number of new structures were added, including a four-storey northern wing, the Kredencarska Tower and a six-storey gatehouse with chapel; the southern wing was extended, while the southern tower was extended upwards by a full two storeys. In years 1550-1560, Stanisław Boner ordered the castle to be extended yet again, resulting in the construction of new revetments on the southern side of the complex, including the bulwark as well as the five-storey “Hen’s Foot” with loophole embrasures, all of them linked by the southern wall surrounding the utility yard. The defensive value of the complex was enhanced through the addition of fortifications protecting the entrance to the castle (new defensive walls) as well as two square-shaped moats and two drawbridges. The extension of the high castle continued as well, with the new, two-storey western wing being constructed during that period. In addition, the castle grounds was also slowly being redeveloped, with both a brewery and a distillery being constructed during the period in question. In the course of works initiated by Andrzej Firlej in the mid-17th century, a number of new developments were made, including the construction of the marble hall above the fortified structure known as the bulwark as well as the redesign of the interiors, which now featured a new, Baroque décor. In 1655, the castle was partially destroyed in the course of the Swedish invasion. After 1669, the castle was reconstructed at the initiative of its new owner, Stanisław Warszycki; the southern wall with machicolations, running alongside the utility yard, was extended upwards, as was the southern wall protecting the castle grounds. In addition, the rooms of the ground-floor level of the southern wing were refurbished, while the castle grounds were now protected by a full defensive wall with gatehouse and a drawbridge. In 1702, the complex sustained severe damage during yet another Swedish raid, beginning the long process of descent into a state of ruin. In 1784, the castle was partially demolished; the rest of the complex continued to serve various purposes until the early 19th century, when it was finally abandoned. In years 1965-1970, at the initiative of the erstwhile Regional Monuments Inspector in Katowice, a series of archaeological and architectural studies took place, along with certain conservation works, resulting in the surviving walls of the castle being preserved in the form of a permanent ruin.

The complex, protected by defensive walls, is situated on the northern slope of the Janowskiego Hill, with a pair of large monadnocks being incorporated into its structure. The constituent parts of the complex are the high castle and the castle grounds, sometimes referred to as the lower castle. The entire complex was originally protected by earthen ramparts, the remnants of which can still be discerned in the surrounding terrain, as well as by partially reconstructed walls surrounding the castle grounds and the western yard, the latter forming the site of a preserved round bastion.

The structure, preserved in the form of a permanent ruin, was designed on an irregular plan. It consists of four wings clustered around an irregular, roughly hexagonal courtyard accessible through a passage leading through the Renaissance gatehouse, preceded by remnants of the moat and drawbridge. The oldest, 15th-century part of the castle is the single-bay north-eastern wing, initially conceived as a single- or two-storey structure, its ground-floor level housing the so-called hajduk stalls dating back to the 16th or 17th century, the hajduk being a term referring to a class of infantry. The north-western wing, erected during the late Middle Ages, was designed on an irregular quadrangular floor plan. In the 16th century, this wing was extended upwards through the addition of a fourth storey. In the basements, there are remnants of chambers with vaulted ceilings of the barrel type, their walls pierced with loophole embrasures, as well as of a medieval kitchen and drainage canal. The first-floor level is clearly divided into a number of spacious servants’ quarters, while the second floor - the most representational of them all - features the remnants of two former dining rooms as well as of a latrine (garderobe) hewn in solid rock. The north-western wing, erected from scratch during the period of the Renaissance-era extension of the castle, consists of a single, narrow suite of rooms. The ground-floor level is divided into a number of utility rooms - small spaces hewn in solid rock - as well as remnants of a staircase. Due to the fact that this section of the castle was partially embedded in the rock outcropping, the first-floor rooms are positioned at the height corresponding to the piano nobile of the northern wing. The representational level of the western wing includes the remains of a bedroom with a secret chamber as well as of the former library of Seweryn Boner, the erstwhile owner of the castle. The southern section of the south-eastern wing, with its overhanging walkway supported by corbels, is one of the oldest parts of the Ogrodzieniec castle, dating back to the 15th century. This wing of the castle contains two storage cellars, the vaulted storerooms, pantry, mill room and gunpowder room at the first-floor level as well as the remains of the grand, representational chambers of the so-called piano nobile at the second-floor level, including a pair of dining rooms with a vestibule, servants’ rooms and the treasury. The third floor, preserved only in fragments, was originally designed as servants’ quarters. This wing of the castle is flanked by a pair of surviving fortified towers: the southern tower eastern side and the Kredencarska Tower on the western side. The southern tower was designed on a circular plan. The Kredencarska Tower, originating from the Renaissance period and crowned with faux machicolations, features the surviving remnants of the pantry, linked to the dining rooms on the piano nobile of the southern wing. The name of the tower itself is derived from the word kredens, which means a credenza or sideboard, but which originally denoted a separate room in a castle or manor house designed for food storage. The southern wing of the castle is linked to the fortified structures from the second half of the 16th century, positioned in the southern part of the complex. A single-storey, rectangular bulwark embedded into a rock promontory is positioned south-east of the castle, its top section taking the form of an angular bastion with eight loophole embrasures. The multi-storey structure known as the Hen’s Foot, positioned on the slope of the hill, features a number of narrow loophole embrasures at the ground-floor level.

The castle grounds are surrounded by walls made of limestone blocks, spanning the spaces between several monadnocks scattered across the area. The south-eastern walls are pierced with the remnants of ten loophole embrasures; there is also a gatehouse, connecting the castle grounds and the site of the now-defunct grange; the south-western wall features a smaller wicket gate, leading towards the Hen’s Foot. The entrance into the castle grounds is preceded by the excavated moat with a square cross-section. The path leading to the high castle follows the course of a historic road, across a reconstructed bridge. Foundations of the now-vanished carriage house and stable can still be seen in the north-western part of the castle grounds.

The site is accessible for a fee.

compiled by Agnieszka Olczyk, Regional Branch of the National Heritage Board of Poland in Katowice, 26-06-2014. 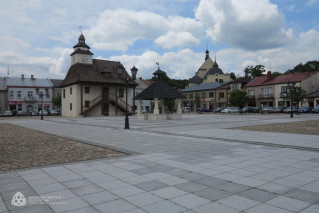 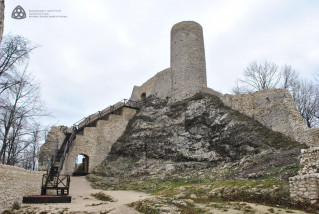 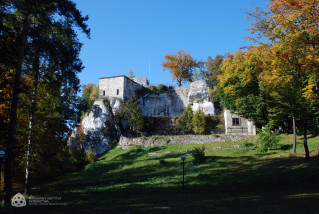 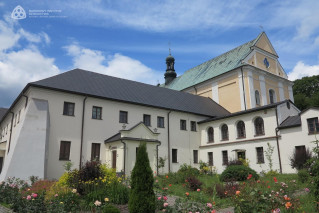 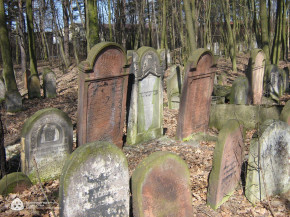 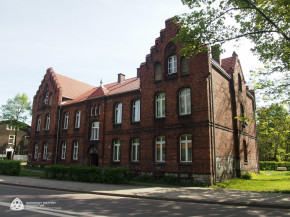 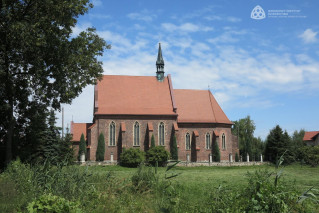 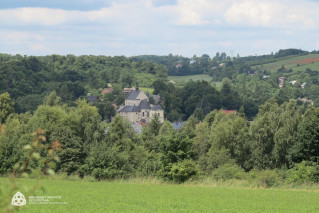