The church of St Giles - Zabytek.pl

An exceptional fortified church perched atop a loess plateau and surrounded by an early modern defensive wall with bastions and fortified towers, its picturesque location and unique features making it a historical monument of regional importance.

The entire complex has a substantial aesthetic value and remains one of the defining features of the surrounding landscape.

The church in Ptkanów can trace its roots back to the 12th century, with the very first church to be erected here being allegedly founded in 1140 by a man named Dunin, member of the House of Łabędź; however, no tangible traces of this long-vanished Romanesque edifice have survived to the present day. It was sometimes stated that the fragments of the sculpted stone friezes embedded in the southern wall of the nave and the eastern wall of the bell tower might constitute such remains of the original, 12th-century church, although there is no hard evidence to back up those claims. The first reference in written sources which confirms the existence of the local parish was made in 1326. Based on the stylistic features of the existing church, it is assumed that it was erected between the 14th and the 15th century. Towards the end of the 16th century or in the 17th century, the church and the nearby cemetery were surrounded by a defensive wall with fortified towers and small bastions equipped with embrasures. The largest and tallest of all fortified towers was the bell tower, positioned in the south-western corner of the wall and doubling as a gatehouse. The existing masonry edifice serving as the rectory was erected in 1789. In 1873, the Ośmiłowski family donated the funds for the construction of the main altarpiece dedicated to St Giles. In 1880, the shingled roof of the church was lost to the blaze; some time later, a Gothic Revival porch adjoining the southern wall of the nave was added, while bastion in the north-eastern corner of the defensive wall was converted into a funerary chapel by the Lipiński family. The most substantial alterations of the silhouette of the church occurred in the years 1906-1910, when the nave was extended westwards based on the design produced by Józef Dziekoński. After World War II came to an end, a series of renovation works was conducted, encompassing, among others, the miniature bastions, the fortified towers and the bell tower, the latter now featuring an adjoining flight of stone steps as well as a new, eastern entrance, both added somewhere around the year 1970. . The northern fortified tower, formerly serving as a morgue, was reconstructed somewhere around the year 1960.

The church complex is situated at the top of a local loess plateau, featuring a steep northward slope. The small hamlet accompanying the church, consisting of a number of houses positioned on both sides of the road connecting the Podole and Brzezie villages, is currently known as Ptkanów.

The church itself is made entirely of locally quarried sandstone blocks (the so-called Podole sandstone), its multiple layers forming an aesthetically pleasing structure which can be admired due to lack of plaster finish of any kind. The chancel features a semi-hexagonal end section, its walls reinforced with buttresses. The elongated rectangular layout of the nave is the result of extension works carried out in the early 20th century; originally, the nave was much shorter, almost square, with buttresses at its corners. The north wall of the presbytery is adjoined by a sacristy. The silhouette of the church is a typical for the Gothic period, with tall gable roofs and pointed-arch windows. The overall appearance of the church is partially the result of the Gothic Revival redesign and restoration which took place in the years 1906-1910; the parts of the church which were added during that period are the western façade of the nave with the embedded stone escutcheon adorned with the Grzymała coat of arms as well as the southern porch, which was added some time before the extension of the nave took place. The interior of the nave features a flat ceiling, with the chancel being graced by a double barrel vault. Embedded stone sculptures depicting two human heads (a male and a female one) as well as a stone with an inscribed date 1140 can be seen in the southern wall of the nave. The origins and chronology of these items remains unknown.

The most unusual feature of the entire complex is the defensive wall surrounding the former church cemetery, designed on an irregular, octagonal plan. The corners of the wall feature an alternating arrangement of small, pentagonal bastions and fortified towers, the largest of them being the bell tower which had also served as the gatehouse right until the period immediately after the end of World War II. All of the fortifications are made of rough-hewn pieces of the locally quarried sandstone, with only some sections being made of brick. The walls of the fortifications are pierced with loophole- and wedge-shaped embrasures. The two-storey bell tower – which may have originally been a three-storey structure – was designed on a rectangular floor plan, with the corners of the monumental structure being reinforced with buttresses. The fortified tower is covered with a low pyramid hipped roof crowned with an arcaded roof lantern topped with a cupola. The upper chamber of the bell tower is of particular interest, its walls punctuated by a rhythmic arrangement of vaulted niches, with the hood of a now-vanished fireplace visible in the corner. Fragments of sculpted stone slabs (friezes?) adorned with both animal and foliate motifs are embedded in the eastern façade of the bell tower. These fragmentary decorations have sometimes been claimed to constitute the remnants of an earlier, Romanesque church, although no hard evidence exists to back up those claims.

The church complex also encompasses the relics of the former rectory complex, preserved on the other side of the road leading from Podole to Brzezie. These include the masonry priest’s house itself, erected towards the end of the 18th century and featuring an axially positioned wooden porch.

The site is open to visitors. The interiors may be explored by prior arrangement with the parish priest. 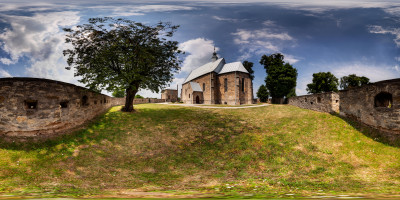 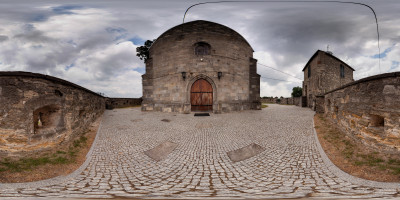 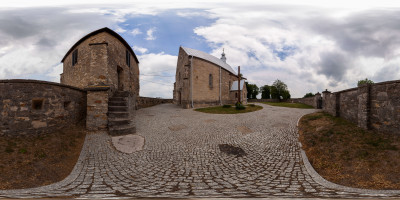 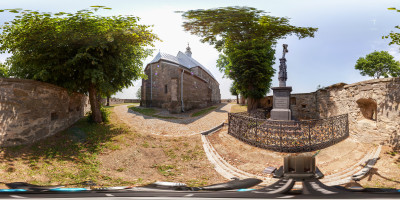 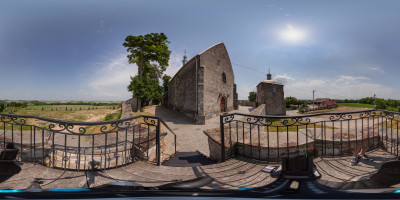 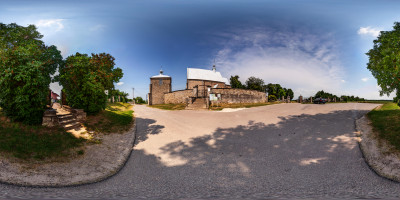 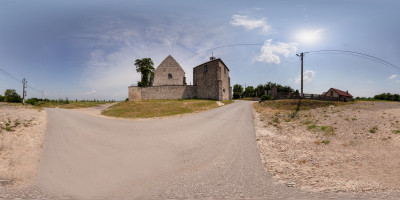 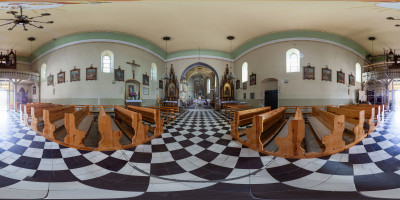 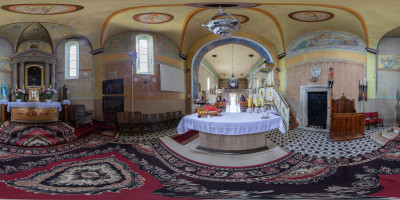