The form of the building is reminiscent of Romanesque architecture of Rhineland. It is characterised by a style uniformity resulting from the fact that the whole building came into being in a single time period and according to a single design subject to one correction. Combination of Romanesque architectural features with a spectacular scale of the architectural undertaking and size of the church makes it an example of most beautiful Protestant churches in Poland. Austerity and solemnity of decoration and fittings of the interior also underscore the rank of the church. In the interior, the following elements are worth attention: wall painting, stone altar, pews for the faithful, black and pale grey floor made of tiles arranged in a geometric pattern, pipe organ casing, lamps, and enormous multi-layer chandelier in the central part.

The initial activities aimed at the construction of the third Evangelical-Augsburg church in Łódź were undertaken in 1900, where the parish of St John was divided so that a new church of St Matthew could be built in the new parish located in the southern part of the city. At the turn of the 19th and the 20th century, the city was inhabited by approx. 80 thousand Evangelical Protestants and the two existing parishes were unable to provide sufficient pastoral services. The growing Protestant population forced church authorities to act - buy appropriate land and procure a design of the church. In 1901, a church construction committee was appointed, including in its composition, among others, E. Herbst, J. Kindreman, and E. Geyer. The initial plans provided for the purchase of a square near the Main Market Square, however, in the end, in 1904, a plot at 279/281 Piotrkowska Street was bought. Preparation of the design was entrusted to Johannes Wende. In 1908, a decision was taken to built a bigger church that it had been previously assumed, and the design was sent to an architect from Berlin, F. Schwechten. The design was corrected following the Schwechten’s suggestions and in 1910, the construction was commenced, starting from the confirmation chapel situated on the western side. The works were interrupted by the outbreak of the World War I. They were finished in a free Poland, in 1928, and in November that year, the building was consecrated. The church of St Matthew is the only Evangelical-Augburg church which was not handed over by the state after the World War II to the Catholic Church.

Its regular body was built on a Greek cross floor plan and constitutes a dominant characteristic feature at the intersection of Piotrkowska and Czerwona Streets. On the axis of the main façade, there is a slender, two-storey tower built on a square floor plan, which in its upper section turns into an octagon covered with a slim tinted spire roof covered with metal sheets arranged in a pattern of rhombuses. The whole is topped by a steel crucifix on an orb. The lower storey is decorated in the corners by octagonal turrets with conical tented roofs. The body and the transept are covered by high gable roofs clad with roof tiles, similarly as the corner turrets. All façades are decorated with shallow rustication. On the ground floor level, there is a massive plinth. Rectangular door openings, apart from the front door, are equipped with semi-circular transom lights. The entrance portal with a triangular top section is slightly advanced when compared to the face of the wall. It is filled with a tympanum with an oculus and relief figures of adoring angels. The upper section is circumscribed by a deep, step-like archivolt whose individual profiles are decorated with elaborate interlace motifs. The entrance door are flanked by four gentle columns on each side, with decorative capitals. The arrangement of the columns corresponds to the depth of the portal: three columns are arranged one after another in the back, and the front one is separated by a vertical zigzag ornament. Above the column capitals, there is a stone frieze decorated with curved foliage motifs. There are two smaller entrances on the sides. Side portals are straight and terminate in a flat archivolt resting on double columns.

Horizontal partitions of the façades, apart from the plinth referred to above, are defined by a string course, dividing the façades into storeys. In the lower storey, there are twin window openings, so called biforia (paired arched windows), and in the central part of the transept, there is a triforium (triple arched window) partitioned by small columns with cubical capitals, with a narrow surround with dentil ornament in the top section. The upper storey is partitioned with narrow lesenes into rectangular, narrow fields, finished with an arcaded frieze in the upper section and featuring high windows with surrounds in the upper sections, flanked by columns arranged in the reveals. In the main façade, above the entrance to the church, there is a large arcaded niche with a rose window. The triangular terminating section of the gable is finished in the upper section with an arcaded frieze. In the gable walls of the transept, featuring triangular ending sections, there are two large rose windows in archivolts. Gable walls of the transept are topped with archivolt friezes.

In the tower, in the storey over the porch, three clock faces are installed (apart from the western side). In the upper store, above the corner turrets, façades are accentuated by arcaded openings with paired arched windows partitioned with columns. Below the arches of the arcades, there are oculi. From the east, west, north, and south, arcades are preceded by shallow balconies with massive balustrades. The corners of the octagon are accentuated by gentle and slender engaged columns with decorative capitals. The storey is topped with an arcaded frieze and a stepped cornice decorated with a corbel in each angle of the octagon. Above the cornice, there are triangular gables with triforia. The roof of the tower features small triangular windows.

The confirmation chapel located from the western side has analogical decoration as other façades - a triangular gable with an arcaded frieze and a large rose window. In the lower part, there are wide semi-circular windows.

Windows in the staircase are rectangular. The door opening is circumscribed by a surround.

The interior layout is determined by the Greek cross projection, with a visibly separated central section, chancel section, and interiors of the transept arms containing galleries characteristic of Protestant churches, supported by massive columns with tetraconch cross section, decorated with marble-imitating painting. In the corners and on the walls of the transept, there is a rustication arranged in a strip pattern.

The vaults of the church are variegated. Over the central section, there is a cupola covered with a lierne vault, and in the confirmation chapel, over the side naves, porches, and under the galleries there are groin vaults and cross-rib vaults.

The corners of the central part are decorated with wall painting with foliage and geometric motifs, and gold coating. Above them, there are busts of the Four Evangelists in medallions. Similar wall painting with foliage and geometric motifs cover the rood arch. The walls of the chancel, which is distinctly separated by a platform couple of steps high, are covered with painted rustication, and above the apse section, there are painted scenes of the Crucifixion and Descent from the Cross. The wall painting was made by Julius Hornung, according to a design by Robert Lamb. Above the scenes, there are round window openings filled with stained glass. The interior of the chancel is occupied by a stone altar in whose front part there is an image of Christ in Gethsemane surrounded by kneeling angels.

On the sides of the chancel, there are niches partitioned by stone balustrades, and over them - small, semi-circular balconies with balustrades similar to those on the galleries: covered with foliage ornamentation enclosed in rectangular fields, separated from one another by small columns. Also the ambo with reliefs on the balustrade and marble elements is worth attention. Both are the works of the Jaeger und Minikel company, according to a design by architect P. Senss. The marble baptismal font was made in the workshop of a famous stonemason from Łódź, Antoni Urbanowski. The giant chandelier hanging in the central part, made of many layers of brass rings supporting numerous round shades, adds a solemn and elegant touch to the interior.

The church of St Matthew, due to its form, architectural detail, and interior décor, belongs to the most spectacular churches in Poland. It is currently the only Evangelical-Augsburg church in the city. In the current years, renovation works are conducted outside and inside the church.

The monument is accessible upon prior arrangement in the parish office. In the church, free-of-charge concerts are organised.

compiled by Patrycja Podgarbi, Regional Branch of the National Heritage Board of Poland in Łódź, 27-10-2014. 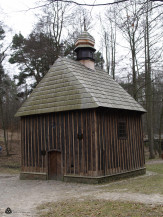 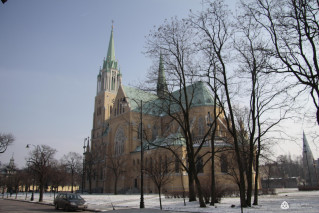 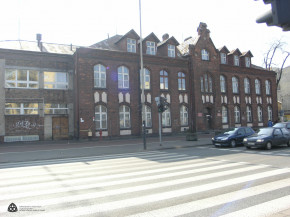 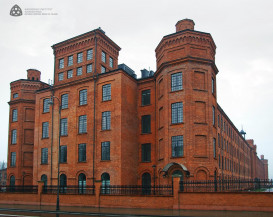 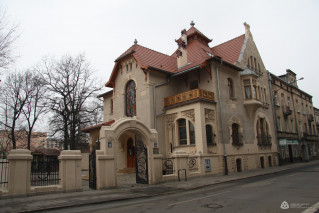 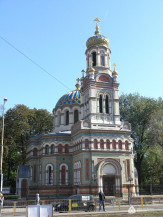 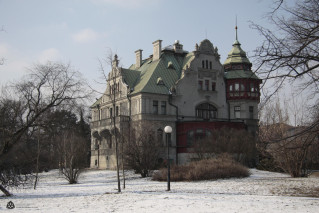