The palace in Kwilcz is an example of a late-classicist residence. It was built in c. 1828 for a prominent Greater Poland family, the Kwileckis. It was probably designed by the renowned architect Karl Friedrich Schinkel. The residence is surrounded by a landscape park, possibly a work of Peter Joseph Lenné — a Berlin architect who designed many parks in Greater Poland.

The history of Kwilcz goes back to the 13th or even 12th century. The development of the settlement is linked to its location at the junction of two routes: one connecting Sieraków and Lwówek and the other connecting Poznań and Skwierzyna. The settlement was urban in character, however, it was never granted municipal rights. The village was mentioned in written sources for the first time in 1388. At that time, Kwilcz belonged to Dobiesław from the Byliny-Szreniawit family, castellan of Czarnków. In the 15th century, heirs to Kwilcz adopted the name “Kwilecki”; they remained the owners of the village until 1939.

Nothing certain is known about the first residence of the Kwilecki family in Kwilcz. Most likely, it was a wooden manor house, probably standing on the same site as the residence which has survived to this day. Later, a brick manor house was built (it may have been the 18th-century north residential building, which has survived to this day). It is believed that the impressive late-classicist palace was built in c. 1828. It is assumed that the construction of the new residence was an idea of the contemporary heir to Kwilcz, Arsen Kwilecki. However, it may also have been an idea of Arsen’s father, Klemens Kwilecki. The building was designed by a renowned Berlin architect who designed many nobility residences in Greater Poland — Karl Friedrich Schinkel. Some architectural historians claim that it was not Schinkel who designed the palace, however, the building has all features characteristic of his style (e.g. a shape modelled on Renaissance Italian villas, the design of the façades, and the manner in which it integrates with the surrounding park). The residence was completed in the early 1830s. In the same period, the other buildings of the complex (the south residential building, the stable with the coach house) were constructed, the park was shaped, and the north residential outbuilding was modified. A number of utility buildings were constructed to the north of the complex. A wooden gazebo was built in the park in the early 20th century.

After 1945, the estate was taken over by the State Treasury. The palace was renovated in 1947 and in 1961. The buildings were used by a Combined State Agricultural Farm (Kombinat PGR) for many years. The palace served administrative and residential functions. In the 1990s, after the State Agricultural Farm was closed down, the palace and the other buildings started falling into decline. In 2013, the palace and park complex was returned to heirs of the pre-war owners.

The complex is located in the north-eastern part of the village, between Kwileckie Lake and a road to Sieraków. In the northern part of the complex, there is courtyard surrounded by buildings, which can be accessed from the road by a driveway. The entrance gate is flanked by tall brick posts topped with decorative stone vases. The late-classicist palace, facing west, is situated on the east side of the courtyard. To the north-west of the palace stands the Late-Baroque north residential outbuilding, referred to as the “old” one (possibly a former manor house), and to the south-west stands the late-classicist residential outbuilding, referred to as the “new” one. The stable and coach building is located on the west side of the courtyard (on the north side of the driveway). The park stretches to the east and south of the palace. It features an avenue lined with chestnut trees, which runs across the park in the centre. The wooden gazebo, serving as an observation point, is located on a small hill in the central part of the park. The palace and park complex covers an area of 6.5 ha. The buildings of the former farm complex are situated to the north and north-west of the palace and park complex.

The palace has a floor plan in the shape of an elongated rectangle. The front façade features a narrow rectangular pseudo-avant-corps with a terrace. A prominent rectangular avant-corps with a roofed terrace adorns the façade facing the garden. A small rectangular annex adjoins the building on the north side. The palace has two storeys and a basement. The compact body of the building is covered with a low hip roof; the terrace on the east side is sheltered by a mono-pitched roof. The north annex has a dual-pitched roof.

The brick walls, covered with plaster, rest on stone and brick foundations. The roofs are covered with roofing felt. The basement rooms have brick surbased vaults and the rooms on the higher storeys — wooden ceilings with counter ceilings.

The façades are decorated with vertical and horizontal lines in the plaster and divided by means of string courses running around the building. They are topped with a prominent cornice resting on corbels. The windows, mostly rectangular, are framed by profiled surrounds and topped by cornice segments. The symmetrical front façade has nine axes. In the centre, there is a triaxial avant-corps topped with a triangular pediment. The large windows at the ground floor level correspond to pairs of smaller windows at the higher level. On the central axis, there is a semicircular-arched entrance flanked by a pair of pilasters and topped with a cornice segment and a palmette. The garden façade has seven axes; it also has a triaxial avant-corps topped with a triangular pediment in the central part. In front of the avant-corps, there is a terrace covered with a roof supported by a decorative wooden structure. There are three semicircular-arched windows at the ground floor level of the avant-corps and pairs of smaller windows at the first floor level. The south side façade has three axes, with a rectangular entrance on the central axis. Above the entrance, there is a balcony enclosed with a decorative metal balustrade, resting on wooden corbels. Originally, the north side façade also had three axes; currently, it is concealed behind a newer annex. The interior has a two-bay layout. The elegant rooms on the ground floor were intended for the eyes of guests (the hall, drawing room, library, and dining room), whereas the first floor contained residential rooms.

The Late-Baroque north residential outbuilding (referred to as the “old” outbuilding) is a brick building with plastered walls, built on a rectangular floor plan. The compact, one-storeyed building is topped with a mansard roof covered with roof tiles. The front façade, featuring decorative lines in the plaster, has nine axes, with a narrow, triaxial avant-corps in the centre. The windows are rectangular. The attic windows are framed by profiled wooden surrounds. The south (new) residential outbuilding, built at the same time as the palace, also has brick plastered walls. It has a rectangular floor plan. The compact, two-storeyed building is topped with a gable roof with wide eaves, covered with roof tiles. The façades are decorated with horizontal and vertical lines in the plaster. The window and door openings, rectangular in shape, are framed by simple surrounds. The north façade also features a wooden balcony resting on decorative corbels; the east façade has a similar balcony, supported by wooden posts.

The residence is surrounded by a landscape park, laid out on the south-west shore of Kwilecki Lake. Its design makes use the natural topography — the terrain slopes down towards the lake. The park is enclosed with a brick wall on the west side and with a decorative metal fence, with a gate and a wicket gate, both flanked by brick posts, on the south side. In the central part of the park, there is an octagonal gazebo having a decorative wooden structure and covered with a tall roof. The dominant tree species in the park are lime trees, oaks, maples, sycamores, ashes, beeches, elms, spruces, chestnut trees, black locusts, and plane trees.

The historic monument may be visited from the outside. Private property.

compiled by Krzysztof Jodłowski, Regional Branch of the National Heritage Board of Poland in Poznan, 29-09-2015. 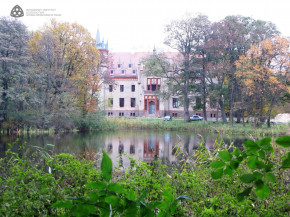 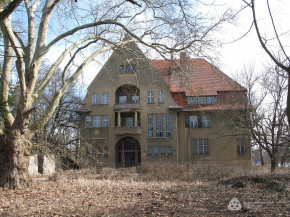 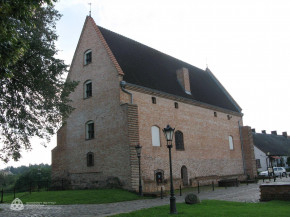 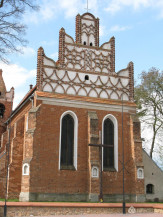 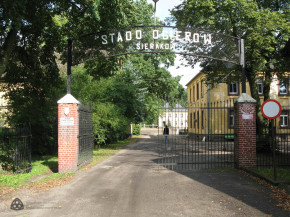 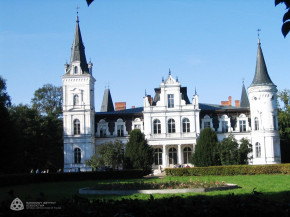 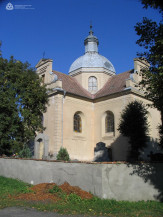 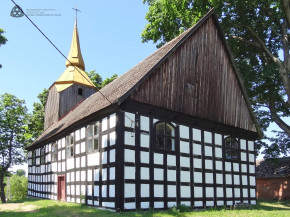