The church in Krzyżowice is among 20 temples in the Brzeg region with preserved wall paintings.

It belongs to the Brzeg Polychrome Route created in 1997. The authorship of the paintings is attributed to the Master of Brzeg’s Adoration of the Magi whose name is unknown. The church founders were the representatives of a noble family from Pogorzela (von Pogarell). The present building is the result of expansion of the brick Gothic chancel by a modern nave in the timber-frame structure - this is one of the oldest surviving examples of the application of this technique in the region. Moreover, the church boasts partially preserved works of the modern craftsmanship, a characteristic font, the so-called baptismal angel, Baroque organ by Johann Gottfried Wilhelm Scheffler (the builder of the instruments in the castle church in Brzeg, in nearby Gierszowice and Wrocław - the Church of Divine Providence), or stained-glass windows from the workshop of Adolph Seiler (the maker of numerous stained-glass windows for churches in Lower Silesia).

The first mention of the chapel in Krzyżowice surfaces in 1376. In the 2nd half of the 15th century, the Pogarell family initiated the construction of a stone temple. Presumably for economic reasons, the project was stopped after the construction of the chancel, yet it was ready to serve the religious purposes. Its wall paintings made approx. between 1418 and 1428 are attributed to the Master of Brzeg’s Adoration of the Magi. The church became a Protestant temple in 1534. To satisfy the requirements of the new confession, the murals were painted over. The timber-frame nave and tower were funded by Georg von Kittlitz in 1580. The church was renovated many times (in 1695/1696, 1722, 1761, 1777, 1830). On the occasion of the works carried out in 1906-1907, the von Pfeil family commissioned stained-glass windows in the Wrocław studio of the well-known Adolph Seiler.

Until the end of WW2, the church belonged to the Evangelical community. In 1957 it was incorporated into a new parish in Pogorzela as a filial church. In 1963 the chancel paintings hidden for 400 years under the plaster were exposed. Also in the 1960s, the tower was renovated.

The church is located in the west part of the village, on the north side of the road to Obórki. From the north, a somewhat broader timber-frame aisle touches an east-looking, brick, Gothic, buttressed chancel with a sacristy. On the west side, it adjoins a pillar, timbered tower. The double-pitched roofs are shingled. From the south, there is a funeral chapel available from outside.

Inside, there is visible evidence of changes to the construction plans during implementation, e.g. a place for vaulting that was never built. Of the two-storey galleries, initially by the west and north wall of the nave and existing before WW2, only the west ones are left. The upper gallery is somewhat recessed in relation to the bottom one; it houses the organ built by the master of Brzeg J.G.W. Scheffler (1778).

The chancel walls still contain some Gothic wall painting. The painted frames depict: the Adoration of the Magi (north wall), Crucifixion on the Tree of Life with the Martyrdom of Saint Achatius and the Ten Thousand Martyrs, angels and Veraikon at the tabernacle and Vir Dolorum (south wall).

The nave exhibits a wooden frame construction of the walls. The old part of the fittings is fragmented and devoid of the original context: the polychrome pulpit (1614) with the representations of the Evangelists serves as a lectern, and the barrier of its stairs with the images of Sts Peter and Paul hangs on the wall, while the top of the Manierist main altar with the scene of Crucifiction is placed in the hallway over the door. An interesting Baroque wooden font (1724) in the shape of an angel with stretched wings, holding a shell, is placed on the wall. Originally, the Dove of the Holy Spirit was hovering over the angel. The church also houses an octagonal sandstone font (16th c.). The stalls bear the date of 1578. The barriers of galleries and choir may also date from that time. The stained-glass windows in the chancel come from a well-known stained-glass workshop (1907).

The church is in use and is accessible for visitors. It is managed by the Parish of the Sacred Heart of Jesus in Pogorzela.

Compiled by Joanna Szot, Regional Branch of the National Heritage Board of Poland in Opole, 01-10-2014. 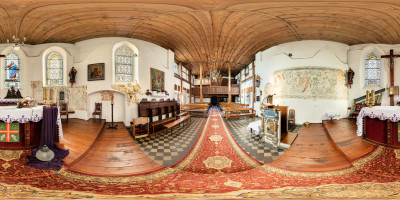 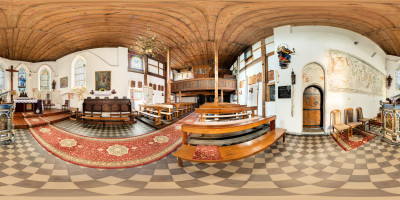 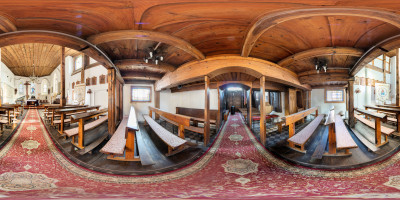 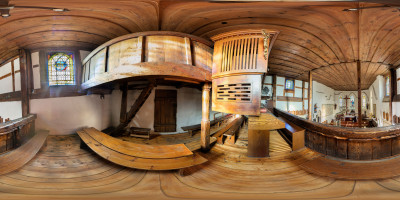 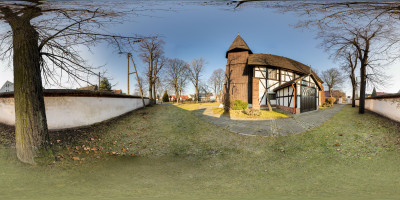 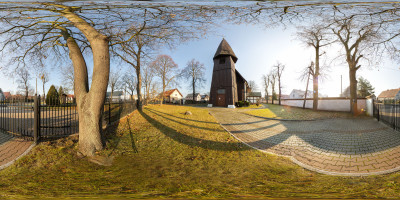 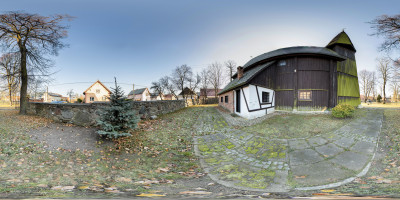 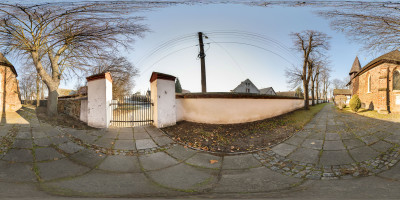 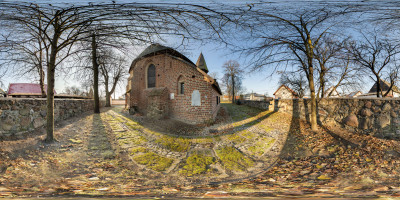