One of the largest manor house and manor farm complexes in the entire Świętokrzyskie region, notable for its good state of preservation. The manor house itself is an example of eclectic design, incorporating references to various architectural styles of the 19th century and the first half of the 20th century.

The oldest known masonry residence in Krzelów is known to have been in existence as far back as the first half of the 14th century, its most likely founder being Warcisław of the Lis coat of arms, the castellan of Cracow who nevertheless continued to emphasise his origins by calling himself “Warcisław of Krzelów”. The castle, perched atop a mound standing amidst waterlogged meadows, is known to have existed as late as 1696, when references were made to the bridges leading up to the structure. Today, however, all that remains of the castle is a small hill located among the fish ponds in the Mierzawa river valley.

It is now suspected that the first buildings forming the nascent manor were erected back in the 18th century, their location being close to the existing building, i.e. on the Białowieża hill. Before 1831, a new, masonry manor house was erected by count Jan Ledóchowski; a wooden outbuilding, a masonry kitchen building and a separate chapel are also known to have accompanied the mansion, even though no trace of these structures remains today. In 1834, the Krzelów manor was confiscated by the government authorities, which was intended as punishment for Ledóchowski, who took part in the November uprising. In 1889, Krzelów was acquired by the margrave Zygmunt Wielopolski, who immediately entrusted it to his wife, Elżbieta; it was her who later designed a breathtaking park and gardens surrounding the mansion. However, the man who made the greatest impact on the current appearance of the manor house and the accompanying buildings was her son, count Alfred Wielopolski, who commissioned the redesign of the main building in 1934 or thereabouts; the attic level was adapted to serve residential purposes, while the garden façade was now graced by a portico supported by a row of pillars. In addition, a pair of symmetrically arranged outbuildings positioned on the eastern and western side of the manor house were also added; these were connected with the main building by means of colonnaded galleries. All of the façades of the redesigned residence now featured a uniform, eclectic appearance, with the dense arrangement of rusticated surrounds and faux corner quoins being the most prevalent feature – a direct reference to the fashionable Renaissance Revival and Neoclassical styles.

Along with the ongoing transformation of the residential section, a large manor farm continued to grow around the mansion; several utility and administrative buildings were erected there during the second half of the 19th century and the first half of the 20th century, many of which have survived intact to the present day. All of the manor farm buildings date back to the period after 1856, as that was the year when a devastating fire engulfed the older, mostly wooden structures. After 1945, the manor house and the accompanying buildings served as a school, which was later superseded by an Agricultural Training Centre in 1973. In 1989, the complex was handed over to the local commune authorities which in turn sold it to a private individual. In 2002, the process of renovation and adaptation of the buildings began, with the general aim of the works performed being to create a hotel and residential complex.

The extensive manor house and manor farm complex, stretching across the Białowieża hill and the adjoining section of the Mierzawa river valley, consists of three basic parts: the residential section (the manor house, park and gardens), the extensive complex of ponds in the river valley as well as the utility section in the form of a large grange located on the eastern side of the park. The entire complex follows a sophisticated, multi-axial layout, with the entire landscape being designed in an intentional, purposeful manner. At the very centre of the complex stands the brick and stone complex consisting of the single-storey manor house and the accompanying outbuildings, surrounded by a spectacular park. The main building and the two symmetrically arranged outbuildings are connected by a pair of colonnaded galleries following a curvilinear outline, with the presence of glazing between the columns lending them a light, airy appearance. The manor house itself is covered with a hip roof with dormer windows as well as wall dormers projecting from the front façade; until very recently, the roof featured a wood shingle cladding which was later replaced by sheet metal after the year 2002, with the same approach being taken with respect to the pyramid hipped roofs of the outbuildings. An avant-corps incorporating the axially positioned main entrance and crowned with a triangular pediment projects from the middle of the front (northern) façade. Another, glazed avant-corps taking the form of a semi-circular portico supported by rectangular columns projects from the southern façade, overlooking the garden. This avant-corps is a later addition, constructed in the year 1934 or thereabouts. The outbuildings flanking the manor house are both identical in shape, designed on a square floor plan. During the interwar period, all façades received a new, uniform design, with rusticated corners and window surrounds as well as a single, moulded crowning cornice. The interiors have been substantially remodelled throughout the second half of the 19th century, although fragments of stucco decorations can still be seen in some of the rooms. A rather intriguing tiled stove has survived intact inside the western outbuilding. Constructed most likely towards the end of the 19th century, the stove is made of decorative tiles made at a manufacturing plant in Nieborów, founded by duke Michał Radziwiłł in the year 1880. The individual tiles are adorned with various heraldic and symbolic motifs. Despite the eclectic décor of its façades, the entire complex of manorial buildings is clearly reminiscent of the Classicist palace complexes of the late 18th century and the early 19th century.

The manor house is surrounded by an extensive, picturesque and well-preserved landscape as well as the former gardens. Most of the buildings comprising the former grange, positioned on the eastern side of the manor house, have survived intact to the present day. The oldest of those buildings, featuring restrained yet easily discernible Neoclassical detailing (the administrator’s building, the granary and the two barns) were erected in the second half of the 19th century; the orangery, the stable and the carriage house were added somewhere around the year 1900, followed by the chancellery and other buildings. Taken together, the Krzelów manor is one of the few rural complexes of this kind and scale which have survived in a relatively good condition. Another notable fact is that some of the purposefully planted trees, dating back to the first half of the 20th century, have also survived among the manor farm buildings.

The complex is not accessible to visitors (private property). 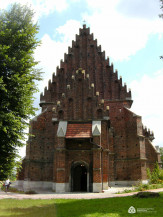 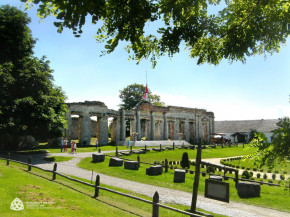 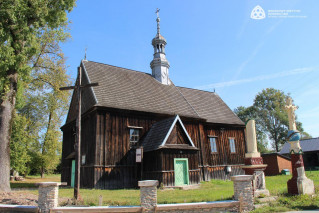 A chapel and a war cemetery

Parish church of St. Nicolas and the Blessed Virgin Mary 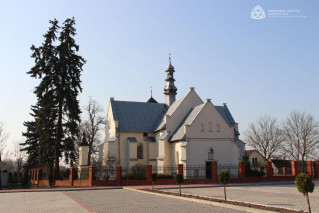 Calvinist church, today the parish church of the Immaculate Conception of the Blessed Virgin Mary and St Nicholas the Bishop and Martyr 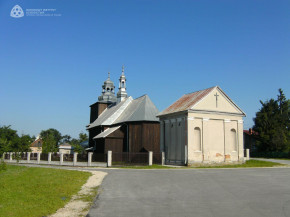 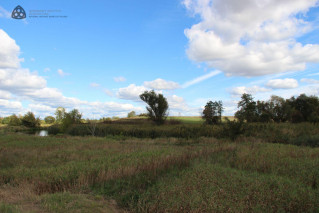 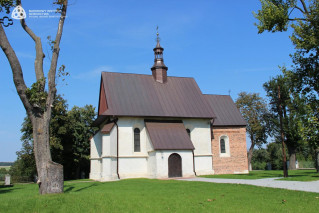 Complex of parish church of St James the Apostle