The church in Krzęcice is among the most prominent examples of late Gothic sacred architecture in the Małopolska region; its distinguishing features are well preserved original architectural forms.

It features the tombstone of Jerzy Niemsta of 1542 - a valuable example of the Renaissance sepulchral art.

The history of Krzcięcice dates back at least to the mid-12th century. The first recorded mention of the local parish is in 1326. In the years 1470-1480, according to Jan Długosz, the church was wooden and was dedicated to St Procopius. After the fire, the builders Albert, Mikołaj and Stanisław erected a stone temple in the years 1536-1542 on the initiative of Jerzy Niemsta. In 1543, provostry and a mansionary college were founded to it.  Ca. 1547 the temple was handed over to Calvinists. Over the next decades, Krzcięcice was one of the most important Reformation centres in Małopolska. Between 1625 and 1643 the church returned to Roman Catholics. In the 18th century the current belfry was raised. In 1823 the west gable of the building was damaged in a storm. It was rebuilt soon after. In 1880 and the beginning of the 20th century, the temple was subject to major renovations. For example, between 1910 and 1914 the entire movable fittings were substituted by neo-Gothic furnishings (made by Aleksander Łabędzki). In the years 1930-1931 the church was renovated along with the belfry and the surroundings. In contemporary time, i.e. between 1996 and 2000 and 2011-2012 a number of conservation and restoration works were performed, which substantially improved the temple’s overall condition and appearance.

The parish church complex is located on a hill in the middle of the village; it occupies the central part of a polygonal square surrounded by a stone wall. It is comprised of a Gothic church situated in the north part of the area and a free-standing 18th-century belfry at the wall south-east of it. An oriented, one-nave church on a cruciform layout comprises a two-bay nave and a narrower and lower presbytery closed with a straight wall adjoining the sacristy with a storeroom. Rectangular chapels were added to the body on both sides (two-bay porch to the north) and a high porch to the west. The building is supported by buttresses. The church was built of brick arranged in a Polish pattern and stone. It is covered with a gable roof (over the nave with a stone turret steeple, presbytery, and west porch) and a shed roof (over the chapels and sacristy). The brick façade of the church, divided by horizontal cornices, is enriched with extensive buttresses and stepped gables with narrow blind windows and crenelated pinnacles. On the presbytery walls, there are numerous inscriptions from the 16th-18th centuries, including the erection plaque with the signature of the builder. The church's interior is covered with multi-stellar vaults (in the presbytery with bas-relief keystones), net and stellar vault (over the nave and the south chapel, with bas-relief keystones), four-pointed stellar vault (in the north chapel and porch with bas-relief keystones) and barrel vault (in the sacristy and storeroom). The entrance to the sacristy from the presbytery is marked by the "marble" portal from the 1660s-1680s (attributable to the workshop of Chęciny) with a portrait at its head. The almost uniform, neo-Gothic church’s furnishings were made in the years 1912-1914 by Aleksander Łabędzki. Some older elements are the paintings in the side altars of the 2nd half of the 18th century and the Renaissance tombstone of Jerzy Niemsta of 1542. A styleless, square-shaped belfry is a storied building with the ground floor walls slightly tilted inwards. It is made of wood, based on a post-and-frame structure, on a stone foundation. Its walls are boarded from the outside, and it features a tented roof laid with wood shingles. It houses a bell dated to the first half of the 16th century.

The building is accessible to visitors. It may be visited upon prior telephone appointment.

Compiled by Łukasz Piotr Młynarski, Regional Branch of the National Heritage Board of Poland in Kielce, 16.10.2014. 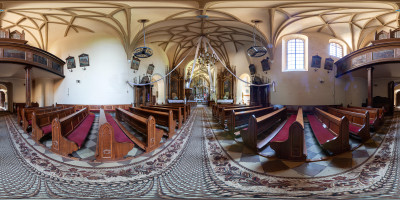 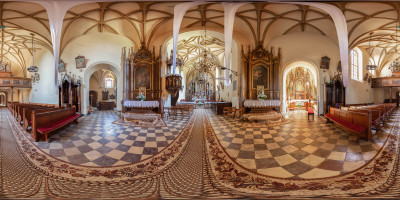 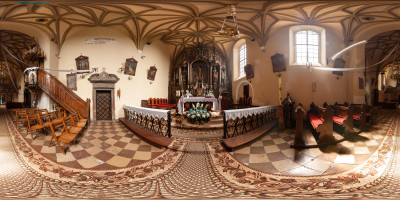 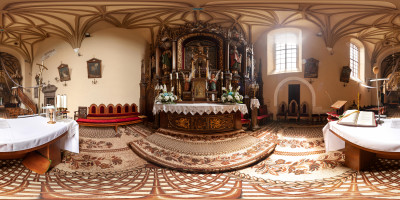 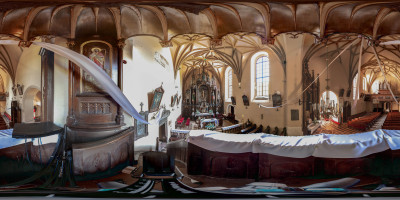 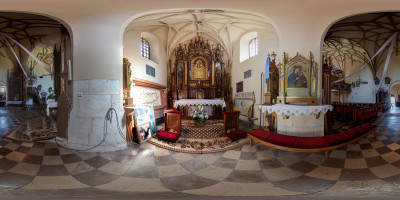 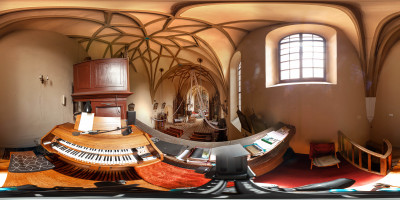 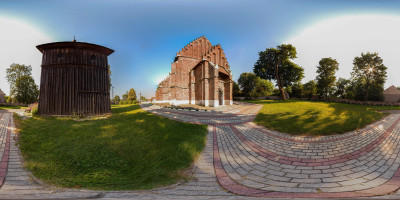 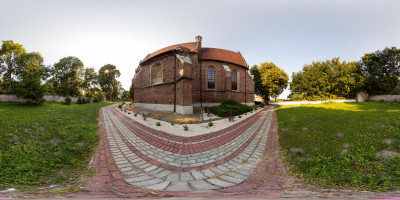 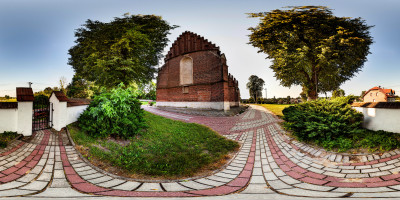 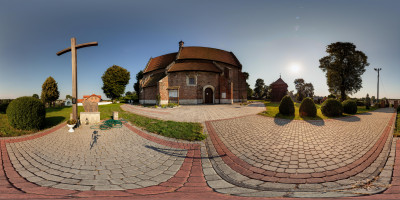 Objects in this area