An unusual example of a nobleman’s residence featuring a picturesque, complex outline which came into being through the addition of a Gothic Revival wing and turrets (possibly designed by Fryderyk Albert Lessel) to a pre-existing manor house designed in the Classicist style.

The very first mentions of the village of Kozierady in written sources appear in the first half of the 15th century. During the early 16th century, the surrounding land was the property of the Bohotynowicz noble family; later on, it was acquired by the ducal houses of Szujski and Sierzputowski. During the 17th century, the manor remained in the hands of the Warszycki family, who are said to have built a manor house there. In 1678, the land was acquired as part of Teresa Warszycka’s dowry by her husband, Jan Pieniążek. In 1700, their daughter Maria received the Kozierady manor as part of her dowry when she married Karol Juliusz Siedlnicki (a.k.a. Sedlnicki) that same year. Later on, the manor was inherited by Siedlnicki’s son, Karol Józef, who was the voivode of the Podlaskie province and the grand crown treasurer (podskarbi); in 1744, a charter was issued which allowed him to establish a town, which he decided to call “Konstantynów” in the honour of his wife, Konstancja Siedlnicka née Branicka. The Siedlnicki family built a Baroque palace in Konstantynów, consisting of a two-storey corps de logis and a pair of single-storey side wings, most likely designed by Jan Klemm, an architect known for numerous works executed for the Branicki noble family. Following the death of Karol Józef Siedlnicki in 1761, the manor, now heavily in debt, was subdivided into a number of smaller pieces of land, followed by frequent changes of ownership. In 1792, the surrounding land was acquired by Tomasz Aleksandrowicz and his wife, Marianna Aleksandrowicz née Ledóchowska. In 1804, their son, Stanisław Aleksandrowicz, finally decided to give the dilapidated residence a new lease of life. The palace, now in a state of ruin, was torn down, leaving only the south-western wing, to which a new, Classicist manor house designed by the architect Fryderyk Lessel. The subsequent transformations of the residence have taken place in stages, although their exact order and the identity of the designers responsible is still a matter of conjecture. During the 1840s, following the acquisition of the manor by Stanisław Aleksandrowicz Jr., the single-storey manor house was connected to the nearby outbuilding, with both the connecting section and the northern façade of the outbuilding most likely taking on their Gothic Revival appearance at that point. It is believed that the architect responsible for the redesign might have been Franciszek Jaszczołd. The entire process of neo-Gothic redesign was then carried on by the subsequent owners of the manor, the comital family of Plater-Zyberek. The south-eastern tower positioned at the corner of the Classicist manor house was most likely erected during the late 1870s, while the turret which adorns the north-eastern corner of the building is an early 20th-century addition. Stanisław Plater-Zyberek has also provided funds for the construction of the local Gothic Revival church designed by Józef Pius Dziekoński, who might have also contributed to the design of the palace. The palace has survived both world wars intact and was converted to serve as a school and a pharmacy after World War II. Today, the palace awaits a new purpose, with some of its rooms currently being used by the Association of the Friends of Konstantynów.

The palace and park complex with the accompanying grange is located on the eastern side of the village, which, at a certain point, used to enjoy the status of a town. The palace is situated in the centre of the complex and features an unusual, picturesque outline which came into being as a result of the gradual extension of the building. The main body of the palace is the single-storey manor house designed in the Classicist style, built on an elongated rectangular floor plan and featuring two rectangular pavilion in the back (a single-storey northern pavilion and a two-storey southern pavilion). In addition, the shape of the former manor house is enlivened by a pair of two-storey Gothic Revival turrets positioned at its corners. A connecting section links the manor house with the south-eastern wing (the former outbuilding) which takes the form of a distinct, single-storey structure with a two-storey middle section, designed on an elongated rectangular floor plan. The individual sections of the palace are made of brick, their walls covered with plaster, and feature hip and gable roofs clad with sheet metal. The interiors of the manor house and the side wing follow a two-bay and two-and-a-half-bay layout respectively. The front (eastern) façade of the main body of the palace is symmetrical in design, featuring a wide portico with four pairs of Ionic columns supporting a triangular, corniced pediment behind which rises a rectangular roof parapet. The portico is flanked by broad windows set inside shallow niches flanked by Ionic columns. At the northern corner of the building rises a turret with a crenellated parapet on top, its walls pierced by windows topped with semicircular arches as well as by circular oculi. The southern corner is accentuated by another turret, covered with a pyramid roof surrounded by decorative battlements, its walls adorned with an arcaded frieze and pairs of pointed-arch blind windows. The north façade of the side wing, positioned perpendicularly towards the façade of the manor house, takes the form of a representational screen façade designed to resemble a picturesque castlette, incorporating a wide array of Gothic Revival motifs: pointed-arch window and door openings, blind windows, crenellated parapets, overhanging turrets and a stepped gable. The façade of the connecting section follows a similar design, featuring an arched passage into a small courtyard beyond. Inside, the visitors can admire some of the original fixtures and fittings, including plasterwork decorations, fireplace surrounds as well as wooden decorations. The palace is surrounded by the remains of a romanticised landscape park, originally linked to the nearby ponds and an oak forest which performed the function of a bestiary. On the south-eastern side of the park there is an ensemble of manor farm buildings - the so-called “Staff”, including the administrator’s building, a stable, granary and cowsheds dating back to the second half of the 19th century and the early 20th century.

compiled by Bożena Stanek-Lebioda, Regional Branch of the National Heritage Board of Poland in Lublin, 07-08-2015. 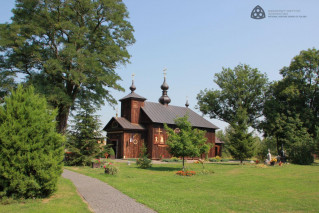 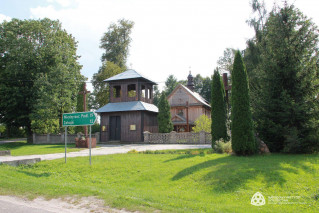 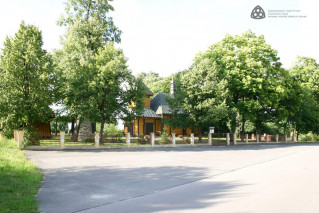 The Uniate Church of St Josaphat The Martyr, currently the Parish Church of the Holy Virgin Mary The Queen of Poland 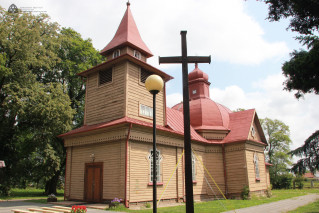 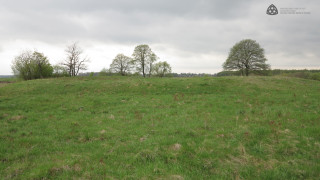 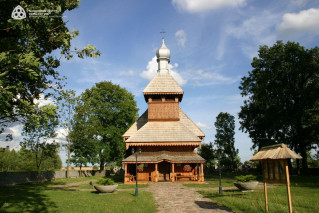 Uniate tserkva of the Guardianship of the Blessed Virgin Mary, currently known as the parish church of Our Lady of the Rosary 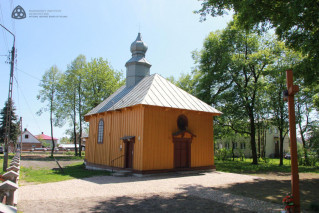 The St Paraskeva’s Uniate Church, currently the Roman Catholic Chapel of the Black Madonna of Częstochowa 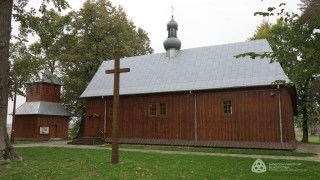 Uniate tserkva of the Exaltation of the Holy Cross, currently serving as a parish church under the same invocation 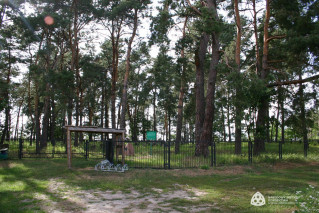