A typical example of a village Gothic hall church in Warmia.

The village of Kiwity was established in 1319 by bishop Ebenhard from Nysa. The location document also contains a mention of a parish priest. The first church in Kiwity probably existed as early as 1325, although it was only mentioned in source documents in 1335. It was a wooden building which was subsequently replaced by the current brick building. The brick church was erected in the 3rd quarter of the 14th century, while the towers were built in around 1400. Construction of the nave ended in around 1420 and the construction of the tower - in around 1450. The tower was refurbished in 1687. In 1722 the sacristy was restored, while in 1791 the renovation of the facades took place. The church underwent a thorough renovation in 1862 during which a partial reconstruction of gables was carried out (construction of a completely new western gable of the tower, lower than the original one); the process of regothicisation of the sacristy took place during the same period. In 1879 the church was consecrated again. The most recent renovation of the structure took place in 1972. 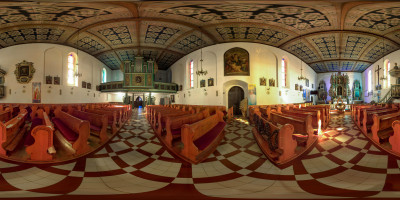 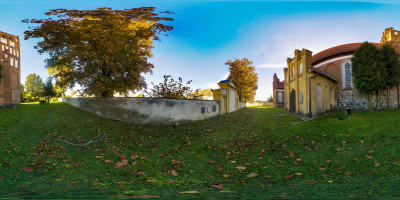 The church in Kiwity is a typical example of a hall village Gothic church from the territory of Warmia. Oriented towards the east, erected on a rectangular floor plan, it is made of brick, with stone used for its lower sections, and features a saddle roof covered with ceramic roof tiles. The body of the church is reinforced by buttresses in its corners. A five-storey tower topped with stepped gables and adorned with decorative blind windows adjoins the main body of the church from the west. On the ground floor of the tower there is a pointed-arch portal flanked by two blind windows. The eastern gable of the church follows a stepped design and features blind windows spanning its entire height. The northern and southern facades feature an alternating arrangement of window openings and blind windows. A sacristy adjoins the northern wall. Traces of a now-defunct annex - probably a porch - are visible on the southern wall. The interior of the church, covered with a flat ceiling, forms a single, open space; the chancel is integrated with the nave. The church is surrounded by a brick wall with three embedded chapels. A gate leads to the yard around the church. The most valuable interior fittings include the Late Gothic figure of Our Lady of Sorrows incorporated into the Baroque main altar from 1726 and the Baroque ambo from around 1726.

Accessible structure. The church may be visited upon prior telephone appointment.