In its original form, the church of St Nicholas was strongly reminiscent of the nearby parish churches in Bydgoszcz, Gębice and Kleczew, resulting in an exceptional group of churches with many unique, regional features. Today, the appearance of the church shows signs of numerous refurbishment and alteration works performed during many different periods; inside, the building features lavish interior fixtures and fittings originating from the now-vanished Franciscan church and monastery in Inowrocław.

The original church of St Nicholas was erected in the mid-13th century, with the funds for its construction being provided by Kazimierz Konradowicz, the duke of Kuyavia and the founder of the city of Inowrocław. A new church was then erected on the same spot following the destruction of the city by the Teutonic Order in 1430; designed in the Late Gothic style, it was initially conceived as a hall church featuring a chancel with a semi-hexagonal end section. Towards the end of the 16th century, the church received new, decorative gables designed in the Renaissance style. The restoration of the church performed in 1765 has significantly altered the appearance of its interior, which now bore the hallmarks of the Baroque style. After 1779, the church became a salt storage building, while during the Napoleonic period it served as a food storage facility. Following the comprehensive restoration of its interiors in the years 1820-1828, the church became a place of worship once again. The conservation works conducted in the mid-19th century as well as towards the end of the same century resulted in the addition of new, Gothic Revival gables as well as in certain other changes. The most recent restoration works, performed in 1928, did nothing to modify the Baroque design of the interior, with the altarpieces being arranged in the current layout. During the interwar period, a new, pseudo-Gothic vaulted ceiling was constructed in the chancel, while the nave now featured a vaulted ceiling designed in the Baroque Revival style. In years 1971-75, the side porch was reconstructed, now bearing the hallmarks of the Gothic style. From 2006 onwards, the church has been undergoing comprehensive conservation and renovation works. Section of the walls reaching all the way to the ceilings had to be replaced due to the damage caused by moisture; later on, horizontal and vertical insulation was added to the building’s foundations, while the interior of the nave now featured a new, geothermal heating system. The existing roof cladding was also replaced with new roof tiles.

The church is situated south-east of the market square, in an area positioned between the B. Gordona and Kasztelańska streets, surrounded by a Baroque Revival perimeter wall dating back to 1923. The church, oriented towards the east, was designed on a rectangular floor plan, its walls reinforced with buttresses. The structure consists of a four-bay nave and a three-bay chancel with a semi-hexagonal termination. An annex with a vestibule and sacristy as well as a polygonal turret, taller than the nave, are positioned at the intersection of the chancel and the main body of the church. On the northern side there is a small porch topped with a tall, stepped gable. The main body of the church consists of the nave, topped with a gable roof, a pair of side aisles, lower than the nave and topped with mono-pitched roofs as well as a chancel, narrower and lower than the nave and covered with a gable roof. The cylindrical turret is crowned with a pyramid-shaped roof. The church is made of brick, arranged in the so-called Gothic bond, with both the gables and the blind windows being covered with plaster. The nave features a false vaulted ceiling supported by basket-handle arches and equipped with lunettes, while the chancel has a groin vault; the side aisles are covered with flat, wooden coffered ceilings, while the sacristy features vaulted ceilings of the stellar and ribbed groin type. The western (front) façade is adorned by a trio of stepped gables; at the ground-floor level, there are three deep, pointed-arch archivolt portals. The southern façade consists of the four-axial main body and the three-axial, slightly offset chancel, with the walls being supported by single-step buttresses. The tall windows of the side aisles are topped with basket-handle arches, while the chancel features pointed-arch window openings with stained glass windows. A small porch with a pointed-arch portal and a stepped gable adjoins the northern façade of the main body of the church. On the eastern side of the church there is a single-storey sacristy, topped with a half-gable adorned by a roof coping with an undulating outline. Above the roof of the nave rises a cylindrical turret with slit-like windows, topped with a pyramid roof.

The interior follows a basilica layout, with a four-bay, taller nave and a lower, three-bay chancel, each of the individual bays being divided by semi-circular arcades running between the naves and supported by sturdy pillars adorned with lesenes. The vaulted ceilings of the nave and the lunettes are adorned with painted decorations incorporating stylised foliate and Christological motifs. Figurative scenes can also be admired in the spaces between the pilasters. The organ gallery - a brick structure occupying the westernmost bay of the central nave - rests on pillars supporting semi-circular arches. The chancel is separated from the nave by a pointed arch (rood arch). The windows are set into deep, pointed-arch niches with chamfered edges. The vaulted ceiling is adorned with floral painted decorations which also incorporate various Christological motifs. In the western wall, there is a pointed-arch doorway leading into the sacristy, wherein visitors can admire a stellar vault and a ribbed groin vault. At the northern corner of the sacristy there is a small entrance leading into the staircase which facilitates access to the turret and the attic. The interior fixtures and fittings of the church include paintings, altarpieces, polychromed decorations, sculptures and epitaph plaques, all of them created over the period of a few hundred years.

The altarpiece of the Holy Cross in the southern aisle, featuring a Gothic sculpture of Christ on the Cross (mid-14th century) as well as the altarpieces of St Anne and of the Annunciation of the Blessed Virgin Mary are the only surviving items which had formed part of the original fixtures and fittings. The remaining items originate from the now-vanished Franciscan church and monastery. The main altarpiece, dating back to the second half of the 18th century and incorporating the image of St Nicholas, is located inside the chancel. A Rococo epitaph plaque dedicated to the Zboża-Radojewski family, made of black marble and stucco, is embedded in the northern pillar. Other notable items include an 18th-century baptismal font, a Rococo pulpit from the same century as well as a pipe organ casing from 1934, made by W. Sauer (Frankfurt an der Oder). The painted decorations gracing the walls and the ceilings of the church, executed in the years 1919 - 1921, incorporate various scenes from the Old and the New Testament. The stained glass windows were crafted by Henryk Nositz Jackowski in 1924. The church is also home to a collection of fine examples of historical goldsmithing, including a Baroque chalice from the 17th century, funded by Dorota Moriglinówna as an offering for the soul of a man named Wawrzyniec Pierdoła, as well as a 17th-century Baroque crucifix and a Rococo crucifix dating back from the 18th century.

Limited access to the historic building. Property of the parish of St Nicholas. The church can be viewed from the outside. The interiors of the church are open during church service.

compiled by Historical Monument and National Heritage Documentation and Popularisation Department of the Kuyavian-Pomeranian Cultural Centre in Bydgoszcz, 26-11-2014 - 8-11-2014 . 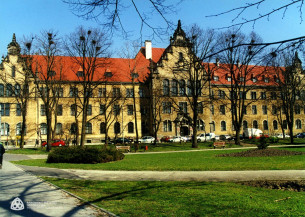 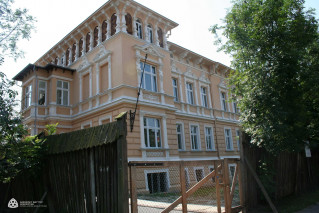 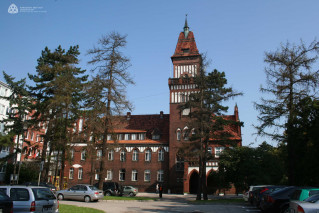 Church of the Name of the Blessed Virgin Mary, called the Ruin 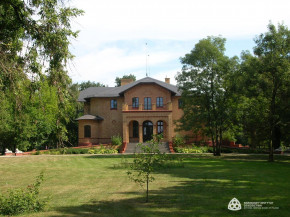 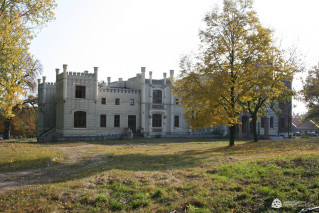 The remains of the Mysia Wieża castle 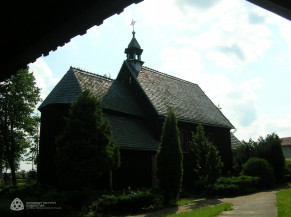 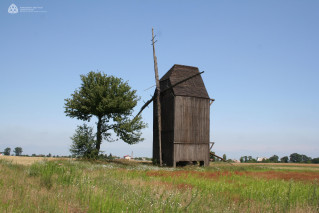