The palace complex in Igołomia, characterised by outstanding composition and dendrological values, is included to the most valuable classic residential complexes in the voivodeship.

Igołomia is located on the left bank of Vistula, in an area abound with traces of ancient and early medieval settlements.The first written sources referring to the village come from the year 1229. It was divided then in Igołomia Mniejsza (the present Zofipole), owned by the Cracow collegiate church of St Florian, and Igołomia Wielka which, in the beginning of the 13th century, was an endowment of the monastery in Tyniec. Sold in 1402 to Jakusz from Boturzyn, it became a knight seat of the Boturzyński family, Łzawa coat of arms. Crops were brought and sold there, as well as products of Cracow craftsmanship and commodities of Cracow and foreign merchants. The land generated profit for the owners, the residents fed Cracow, but also Cracow provided means of living to villages located by the route along Vistula. Chronicles, lists, and inventories from 15th to 18th century indicated that there were numerous inns selling alcohol and offering accommodation along the route, as well as mills, forges, baths, breweries, distilleries, and tollbars, as well as marinas on Vistula for scows and timber rafting, and river crossing points. The owners of Igołomia changed many times, but it was continuously, for centuries, connected with the royal city of Cracow. From 1778, it was owned by the Cracow Academy; in the beginning of the 19th century, it was taken over by the Wodzicki family who founded the palace existing today. The initiator of the construction of the palace was probably Franciszek Wodzicki or his daughter - Łucja nee Wodzicka Przerembska. Later on the Skorupko family owned the property, and in 1870, the village was bought by Wilhelm Homolacz. From the beginning of the 20th century, the Morstin family lived in Igołomia; the last owners were Karolina nee Mycielska Morstin and her daughter Teresa Morstin. The palace, after a full-scale renovation in 1960s, is used by the Institute of Archaeology and Ethnology of the Polish Academy of Sciences.

The architectural design of the palace in Igołomia is attributed to Piotr Christian Aigner (1746-1841), one of the greatest classical architecture designers in Poland, although earlier research conducted by Tadeusz Szydłowski and Tadeusz Stryjeński associated the complex with Dominik Merlini or Jakub Kubicki.

In the palace, pure forms of classical complexes are present and visible both in the projection of the building, aiming at symmetry and combining, in the middle part, the form of square and circle (vestibule and drawing room), as well as in the front façade where Baroque partitions were abandoned in favour of monumental rustication and giant order of the entrance portico. The palace is built on a rectangular floor plan, with the portico resting on four slender Ionic columns in the front, supporting entablature with a pediment and an avant-corps terminating in a semi-hexagon, housing a round drawing room, from the garden. From the south, as a result of the closeness of the Vistula terrace edge, the building rests on high look-out basements and appears to be three-storey.

The form of the palace is simple, and its decoration is very modest. Façades are rusticated in the corners, also the façade from the side of the garden is rusticated - on the three-side avant-corps and at the ground floor level. High windows of the ground floor (housing interiors intended for the eyes of guests), topped with cornices resting on corbels are complemented with small square windows at the first floor level. Window surrounds are simple, and sill panels are decorated with meander ornamentation, probably inspired by Neufforge. The layout of rooms inside is typical of country residences built at the turn of the 18th and 19th century.

The main entrance leads through the portico into a spacious hall, behind which there is a round drawing room encompassing two storeys, with a balcony, advanced with the avant-corps towards the garden. On both sides of the hall, there are two suites of rooms. The interior decoration is best preserved in the drawing room, covered by a flattened cupola ceiling adorned with coffers and rosettes. The walls of the drawing room are decorated with a frieze with opposing griffins, running at 2/3 of the room height (similar griffins can be found in the Temple of Sibilla in Puławy). In one of the walls, there is a marble fireplace with a relief depicting an offer to Aesculapius, which is associated with a legend that Igołomia was a gift of queen Bona Sforza for a physician whom she addressed “idolo mio”, hence the name of the village. In the top section of the fireplace, there is a depiction of French Imperial Eagle in a laurel wreath. In the little drawing room on the south-east, at the bottom of the wall, there is a frieze with pairs of Sphinxes, with a band of leaves in the top. Stucco decorations with foliage motifs can also be found in the room in the south-western corner. Ceilings of most rooms are decorated with rosettes arranged of acanthus leaves. Stucco decorations of the interiors were made by Fryderyk Baumann. Also some elements of the original fittings have survived in the palace, e.g. part of the window and door carpentry, strapwork and handles.

The palace is surrounded by a park arranged in the English style, with an area of approx. 8 ha. In its southern part, located in the Vistula floodplain, there was a pond once. Among many trees growing there, one can found multiple interesting and really old specimens. The palace houses currently an archaeological workshop with a museum with archaeological artefacts, e.g. ceramic vessels, tools, and decorative elements made a few thousand years ago.

By the access road to the palace and park complex, there is a 19th-century forge with stove and remains of the fittings preserved, known from the graphics by Artur Grottger, depicting a famous scene of forging scythes by January Uprising insurgents.

The palace is not accessible for visitors (it is rendered available for tours at special occasions, e.g. Heritage Days in 2000 (2nd edition) and 2007 (9th edition)

compiled by Grzegorz Młynarczyk, Regional Branch of the National Heritage Board of Poland in Krakow, 22-09-2014. 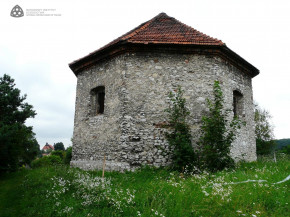 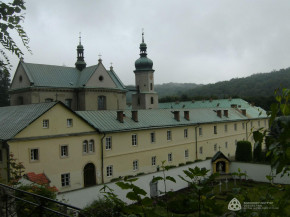 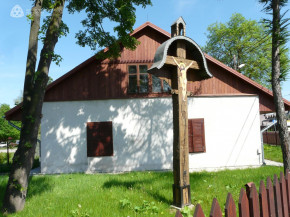 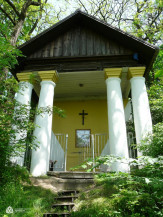 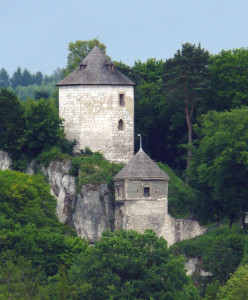 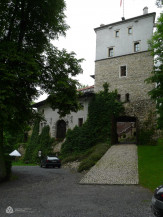 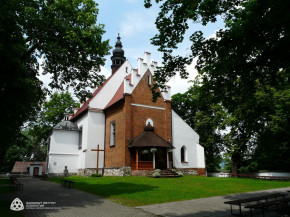 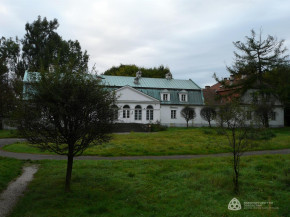 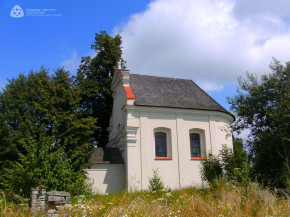 Chapel of St John the Baptist