The church in Grzegorzewice is an example of harmonious adaptation of a Romanesque building for the purposes of an early modern sacred complex.

Its oldest part — a rotunda from the 1st half of the 14th century, is one of the latest Romanesque structures in Poland.

The original church has the form of a rotunda with an apse from the east. In the latest recorded mention related to it, dating back to 1334-1336, contained in the register of papal tithe (nominally from years 1350-1351), it was described as ecclesia nova. It might be suspected, then, that it was built just before that date, which is supported also by results of archaeological surveys of the cemetery adjoining in, and analogies with other buildings. According to Jan Długosz, the church was founded by Nawój of the Topór coat of arms, which was additionally confirmed by research conducted by Marek Derwich. Before 1627, a nave and a sacristy were added to the church, and in 1633, the converted church has been consecrated. In 1845 its condition was so bad that a general renovation was planned, combined with construction of new: roof, ceilings, steeple, and sacristy. However, these intentions were not put into practice, which led, in 1851, to collapse of the roof and closing the church for the faithful. In 1854, the church was rebuilt and a sacristy was added to it. Soon thereafter, the then parish priest Józef Frey (died 1880), founded two side altars. In 1932, a thorough restoration of the building was carried out, combined with exposing of the Romanesque brickwork of presbytery walls and reconstruction of the tracery of the apse window. In 1935, a competition was held for the execution of the main altar, participated by, inter alia, Bohdan Pniewski and Jan Zachwatowicz. The result of the competition was replaced, in 1955, by an altar created according to a design by Zofia Trzcińska-Kamieńska. In years 1972-1973, archaeological surveys were carried out in the vicinity of the church, during which historical material was discovered, originating from a period not earlier than the turn of the 13th and 14th century In years 1980-1981 and 2011, a number of conservation and restoration works were carried out in relation to it, which contributed to the improvement of the technical condition of the historical building and its aesthetics. In 2012, the late Baroque ambo and the painting of Our Lady of the Snows from the 1st half of the 17th century underwent maintenance.

Open page of the object in new tab

The church is located on the peak of Góra Sytna, nearly in the middle of a rectangular square surrounded by a stone walls with a brick belfry. The building is not uniform in style, it is oriented and single-nave, and comprised of an almost square nave with buttresses in the corners (ca. 1627), and a presbytery of the same height (1st half of the 14th century) on a circular plan with an apse on the east, adjoined by a rectangular, low sacristy from the north (ca. 1627). The church is made of split stone and brick; its whole interior and façades of the nave are plastered. It is covered by roofs laid with galvanised sheets: a gable roof with a steeple on the east (over the nave), a multi-faced roof (over the presbytery), and a shed roof (over the sacristy). Among its plain façades, the western one is worth attention: framed with buttresses on the sides, with a triangular gable in the ending section. The façade features a stone portal with a cartouche on a voussoir, and a carved date, 1627. The portal accentuating the side entrance is almost identical. The façade of the presbytery is variegated by three Romanesque windows (circular in an apse with tracery). The church's interior is covered with ceilings (in the nave, presbytery, and sacristy), and a half-dome (presbytery apse). The elements of modest interior fittings include, among other things: an ambo originating from the 1st half of the 18th century (?), side altars with Baroque features from the 2nd half of the 19th century (?), a Gothic baptismal font (2nd half of the 14th century), a painting of Our Lady of the Snows from mid-17th century (?), and neo-Classicist pipe organ casing (by Jan Kołodziejski from Piotrków Trybunalski).

The historic building is accessible to visitors. It may be visited upon prior telephone appointment.

Compiled by Łukasz Piotr Młynarski, Regional Branch of the National Heritage Board of Poland in Kielce, 25.09.2014. 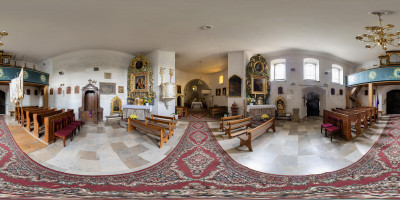 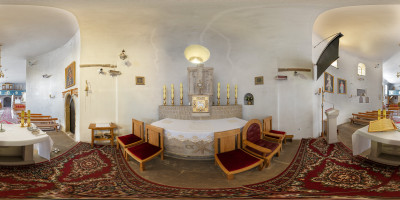 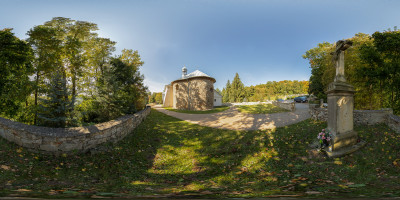 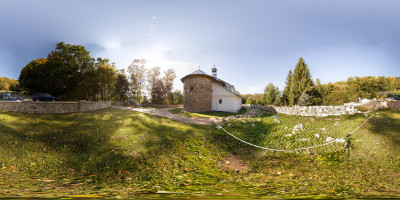 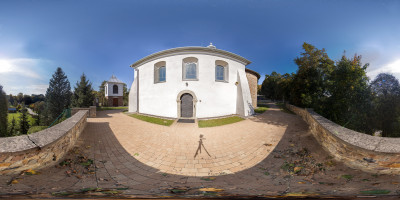 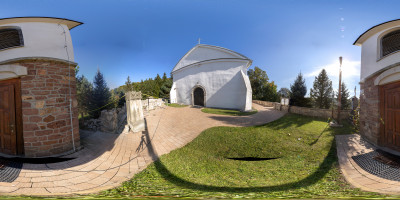 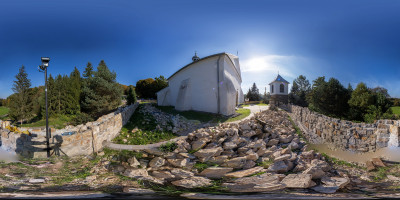