The motte, known locally as “Miasteczko” (The Little Town), is located in the south-western part of the village, about 300 metres to the west from the tightly spaced cluster of village buildings and about 400 metres to the north-west from the former manorial structures dating back to the 19th century when calculating in a straight line. The motte occupies a part of a loess promontory with a total surface area of a few hectares, projecting into the Huczwa river valley from the north-east.

The motte is an earthen mound about 38-58 metres in diameter, standing at about 5 metres tall when calculating from its base, separated from the rest of the elevated section of the surrounding terrain by an artificial moat. The site has sustained substantial damage due to digging in the course of the functioning of a farm which existed the until the late 1970s. Later on, the site was abandoned and overgrown with grass, with a few shrubs and a single, large tree visible in its western section. Today, the site of the motte continued to be used as arable land.

Based on the available research results, one may conclude that the motte-and-bailey castle in Gozdów can trace its roots to the second half of the 14th century. The structure remained in use until the 18th century. Its history is related to the Góźdź-Gdeszyński noble family of the Gozdawa coat of arms.

The very first mentions of Oborków - the village on the site of which Gozdów was subsequently founded - date back to 1444, with the sources stating that one Goworko from Rokitnica - once the seat of the Rawicz noble family in the Rawa region - purchased the land from duke Władysław I. In 1468, the village was acquired by Jan Góźdź from Gdeszyn (Gozdawa coat of arms), the standard-bearer (chorąży) of Bełż in the years 1438-1469. In 1548, at the initiative of Stanisław from Gdeszyn, a new town was chartered on the site of Oborków village, with its name - Gozdów - being most likely a reference to the owner’s coat of arms. In 1698, Gozdów sustained substantial losses and was never referred to as a town again from that moment onwards. The Góźdź-Gdeszyński family owned the surrounding lands right until the mid-18th century.

As for the motte-and-bailey castle in Gozdów, no references in written sources have been unearthed so far, which means that the only knowledge of its history stems from local traditions. The only trace of its existence in source materials can be found on a map by F. von Mieg prepared in years 1779-1782, which contains a reference to this structure.

The first mention of the site in Gozdów in the literature on the subject was made by Stefan Nosek in 1957. Archaeological literature refers to the Gozdów site as an early medieval hillfort, a fortified feudal manor, a natural geomorphological landform or a so-called conical motte.

Excavation research on the site was carried out in years 1998 and 2000 by Ewa Prusicka-Kołcon. The archaeological activities covered an area with a total surface of 224 square metres, encompassing the central, northern and western parts of the motte.

The location and height plan of the site was drawn up in 1989 by Włodzimierz Zieliński.

Surface surveys of the site within the framework of the ‘Archaeological Picture of Poland’ project were carried out by Wiesław Koman in 1991.

Research shows that on the top of the artificial motte, in the middle part thereof, stood a residential structure which has gone through at least two distinct phases of use in its history. During the first, earlier phase, the site was occupied by a wooden edifice the floor of which has been discovered at the depth of 3.8 metres below surface level. Archaeologists unearthed well-preserved pieces of timber (notched beams, planks and dowels as well as wood shingles, the latter most likely forming part of the building’s roof cladding). The structure is believed to have been made of hewn logs (corner-notched structure). The logs were bound together using simple lap joints and reinforced with dowels. Dendrological analysis shows that the timbers used for the construction of the building were oakwood (with a few pieces of poplar wood in some places), with the wood shingles being made of pinewood. The overall outline of this manor house could not be determined on the basis of the excavations made. So far it has only been possible to determine the width of one wall, positioned on the east-west axis (between 4.5 and 5 metres); the longer side of the structure was positioned on the north-south axis, with the presence of wooden remains in two of the excavations made indicating that the length thereof was at least 12 metres. In the end, during the late 15th century or in the early 16th century, the building was lost to the blaze. The conclusions as to its age have been made on the basis of numerous moveable artefacts found on the site (fragments of clay vessels, wrought iron nails, an iron spur and a number of pot-shaped stove tiles), with the researchers now believing that the structure dates back to the period between the late 14th century and the turn of the 16th century, with the largest group of artefacts found originating from the 15th century. One particularly notable finding is the large assortment of leather objects: fragments of footwear (foot soles, insteps), leather belts, coin purses and other, unidentified objects; the presence of such a large quantity thereof - along with the fact that bone awls and needles have also been unearthed on the site - may indicate the presence of a craftsman’s workshop. During the second phase, a new building - also made of wood - was erected on top of the motte. Researchers were able to determine the course of two parallel interior walls, positioned on the north-south axis, at a distance of approximately 19-20 metres from one another. The course of the remaining walls was impossible to determine with any degree of certainty. It has been determined, however, that the entire structure was positioned closer to the centre of the motte, whereas the previous building occupied the northern part thereof. The second building to be erected on the site suffered the same fate as its predecessor, as evidenced by the presence of large quantities of charcoal in the mound’s backfill. In addition, numerous moveable artefacts have been unearthed - fragments of pottery and tiles, originating mostly from the period between the 16th and the 17th century, with some of them dating back to the 18th century or the late Middle Ages as well; there were also large quantities of prehistoric artefacts - traces of structures which have been destroyed in the course of construction works both in the Middle Ages and in the early modern period. In the course of the survey, at the eastern edge of the motte, two small stone walls with the length of 1.3 and 1.6 metres, their width being 1.0 and 0.8 metres respectively; these walls, positioned on the east-west axis and positioned in parallel to one another at a distance of 2.2 metres, appear isolated and to not lead up to any other structure. Below the level of the foundations of one of the walls, a clay vessel dating back to the 15th century has been found; one may suspect that it has been placed there as a foundation offering. The function of these walls has not been identified with any degree of certainty; it is believed that they may have formed part of a gatehouse, wicket gate or some sort of fortifications. The vessel found beneath the foundations, however, makes it possible to conclude that these walls were somehow linked to the first residential building that had once stood on the hill. No traces of fortifications have been found during the survey; it is believed they may have been levelled during the early modern period or even quite recently, since the site has served as arable land right until the 1980s. The map prepared by F. von Mieg, dating back to 1779-1782, shows the presence of a complex designed on a square plan, surrounded by an earthen rampart. Inside these fortifications, however, no traces of any buildings can be seen, which would seem to be consistent with the fact that the chronology of moveable artefacts obtained in the course of research does not go beyond the 18th century.

compiled by Ewa Prusicka, Regional Branch of the National Heritage Board of Poland in Lublin, 17-10-2015. 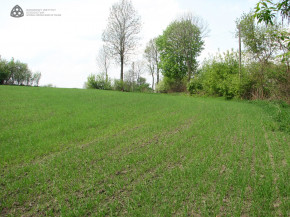 The burgstall, site no. 1 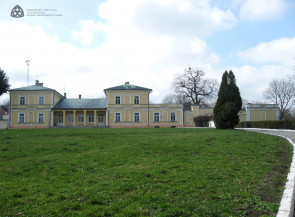 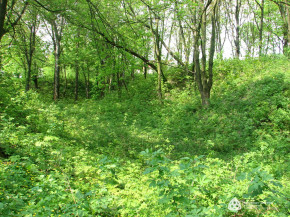 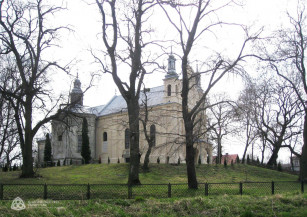 Parish church of the Assumption of the Blessed Virgin Mary, forming a complex with a bell tower 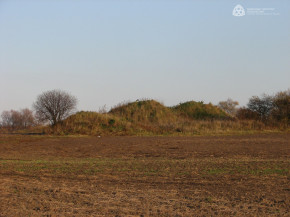 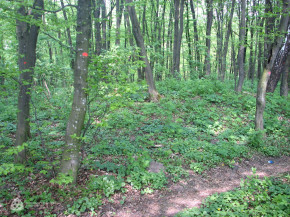 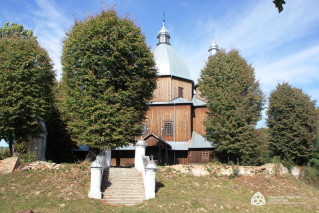 The Greek Catholic Church of the Exaltation of the Holy Cross, now the filial church of the Żniatyn parish 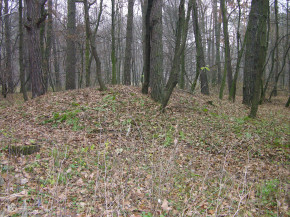 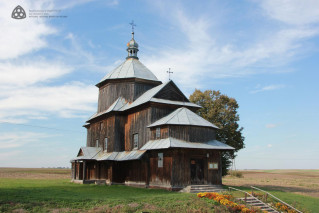