The church and monastery complex of the Cistercian abbey in Gościkowo-Paradyż is one of the oldest and most valuable such complexes in the Lubuskie voivodeship and in the western part of Poland. It features an original architectural and landscape layout, characteristic of Cistercian complexes. The complex constitutes a valuable example of Baroque sacred architecture in which the early-Gothic origins and further stages of construction remain in a legible and harmonised balance. The surroundings formed by gardens and utility facilities highlight and complement the value of the historic buildings.

The complex was built in the period between 1236 and the 4th quarter of the 13th century. The chancel of the church came into being at the second stage of the construction, i.e. from the end of the 13th and during the 14th century. From the second half of the 14th century until the 1st third of the 17th century, the eastern part of the church was reconstructed after a fire. At that time, the chapel of the Holy Cross was erected. After another fire, in 1722-1788, the complex was reconstructed in the Baroque style in the years 1722-1788 (with Karol Marcin Frantz acting as the architect). At that time, two towers and the chapel of St Adalbert were added from the west, and in the southern part of the ambit, the chapel of Our Lady of Paradyż was erected. The second garth of the monastery and three towers situated in the corners of the building originate from the 2nd half of the 18th century. The façades and interior of the church and the monastery were provided with Baroque outfit, and the fittings were replaced. Also the figures of saints arranged in the monastic garden come from the period of the Baroque extension of the complex. In 1810, the monastery estate was secularised, and the final disbandment of the congregation took place in 1834. The complex housed a teachers’ training college and a secondary school. After World War II, the complex became property of the Roman-Catholic Church and the seat of a Theological Seminary. In the years 1964-1971, a full-scale restoration of the complex was carried out, and in the 1990s, a comprehensive renovation of façades of the church and the monastery, revalorisation of the monastic garden, and conservation of sculptures and stone elements were conducted. The interior and fittings of the church were renovated in 2005 and in 2007-2009.

The monastery complex in Gościkowo-Paradyż is situated on a small hill, on the northern bank of the Paklica river, near the Międzyrzecz-Świebodzin road. The church is located in the north-western corner of the monastery complex, and from the east and the south, it is adjoined by the retreat building. The Baroque buildings of Gothic origin, with visible sings of extension stages, are surrounded by monastic gardens and utility buildings. They are partially fenced by a brick wall. The church of the Assumption of the Blessed Virgin Mary and St Martin the Bishop is an oriented building in the form of a two-tower, three-nave, four-bay basilica with each two side nave bays corresponding to one bay of the main nave. It features a rectangular chancel with ambulatory, an octagonal porch between the towers, and three chapels - two from the north, on a circular floor plan (in the western part, the chapel of St Adalbert, and in the eastern part - the chapel of the Holy Cross), and one from the south-west, on a floor plan shaped as a circle within a square frame (chapel of Our Lady of Paradyż). The main nave is wider and much higher than side naves. It is covered with a gable roof with a steeple turret in the middle of the roof ridge. Side naves are topped with mono-pitched roofs. The two quadrangular towers on the west are covered with tented roofs, the two chapels on the north are shaped as rotundas and topped with multi-pitched roofs, and the chapel on the south-west is enclosed hexagonally with a shed roof which also covers the ambit. The building is made of stone and brick, with a wooden king and queen post truss structure of the roof, clad in copper sheet. The façades are plastered, pierced with windows with semicircular arches, articulated with cornices, engaged columns, pilasters, lesenes, and adorned with Baroque ornaments shaped as shells, festoons, foliate scrollwork, and heraldic motifs. The front façade is three-storey and three-axial. The main axis is accentuated with engaged columns in the giant order, supporting a balcony with a decorative metal balustrade at the level of the second storey. The main entrance portal is flanked with engaged columns, and over it, there is a niche with a sculpture group presenting St Martin with the beggar. At the level of the third storey, there is a window framed with pairs of pilasters, topped in the upper part with a triangular pediment. Tower façades are partitioned with engaged columns and multiple cornices. Side façades are buttressed. The interior in the section of the naves features cross-rib vaulting, and over western choir - a barrel vault. The crypts are also covered with barrel vaults. The rectangular ambulatory features a barrel vault with lunettes. In the chapels, there are dome-shaped vaults, divided with ribs in the north-eastern one. The sumptuous décor of the church is dominated by Baroque fittings. The most important element is the large and sophisticated main altar, with a painting depicting the Assumption of the Blessed Virgin Mary (Felix Antoni Scheffler) and reliquaries formed as decorative, glazed closets, where relics of saint martyrs are stored. Also the pipe organ casing represents the Baroque style (Joachim Gottlon Peter). From the Gothic fittings, fragments of a fresco have survived, but first of all cross-rib vaults with finely sculpted keystones and supports. The church houses numerous side altars, paintings, epitaphs, and other fitting elements, mostly originating from the 17th and the 18th century. In the chancel, there are also Classicist choir stalls. In the crypt, there are mummified bodies of monks who died after 1700.

The monastery building was erected on a quadrilateral floor plan with three towers on a circular floor plan in the corners and two internal yards. It is a two-storey building with a loft, covered with a gable roof with wall dormers. The towers are topped with tented roofs. The building is made of brick and stone, with a wooden king and queen post roof truss. The roof is clad in copper sheet and slate in the part of the towers. The façades are plastered and symmetrical, and feature a similar finish. They are partitioned with lesenes and horizontal strips, pierced with rectangular windows with surrounds and hoods, topped with a cornice, and adorned with Baroque and Regency ornamentation. The portals are flanked by pilasters with figures of saints and angels in the top section. The towers are two-storey, three-axial, and articulated with pilasters in the giant order. The garths are buttressed, and pierced with arcades in the older part. Interiors in the older part of the monastery are covered with a barrel vault with lunettes and ceilings, and in the cloister section - with sail vaults. The new part of the monastery features barrel vaults in the basement section, and sail vaults and ceilings in the upper storeys. The historic fittings of the monastery include frescoes in the refectory, Rococo and Classicist doors, and a seminary chapel. An important role in the sacred complex is played by gardens which adjoin the monastery and the church from the north, west, and east. They are decorated with a set of five stone figures from the 18th century, depicting, among others, St Florian, St Bernard of Clairvaux, St Benedict, and St Martin of Tours. In front of the western façade of the church, there is a Rococo figure of the Blessed Virgin Mary Immaculate from 1755, surrounded by saints.

The building is available all year round and may be visited upon prior telephone appointment, only with a tourist guide.

compiled by Marta Kłaczkowska, Regional Branch of the National Heritage Board of Poland in zielona Góra, 18-06-2014. 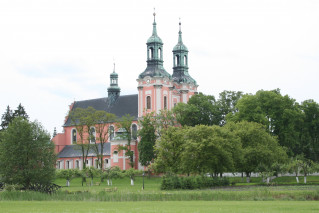 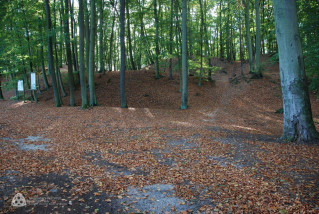 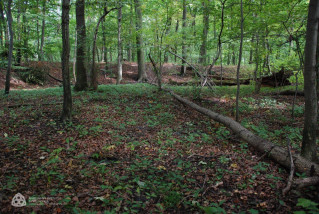 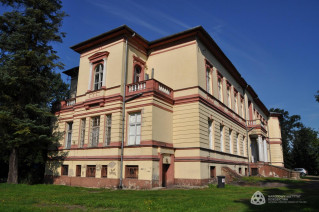 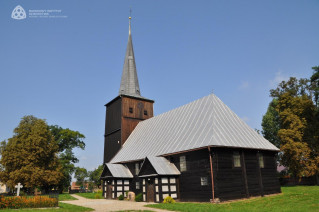 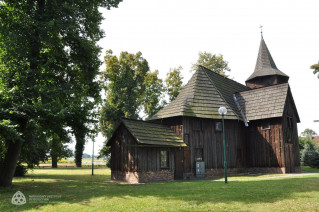