The village of Czestram-Golejewko is one of the oldest Polish villages mentioned in historical sources. The palace complex in Golejewko comprises a palace, a park, and a manor farm, covering a vast area and shaped on the basis of a Late-Medieval defensive manor house. The oldest surviving structure of the complex — the gate building, or the gate tower — was most probably originally used as a last-stand keep. It underwent numerous modifications and adaptation works; currently, it is material proof of the existence of a late-mediaeval magnate residence in this place. At the same time, it is an example of a building whose form and function changed over the centuries. The manor farm buildings, dating back to the 19th and 20th centuries and considered to form one of the most impressive complexes of this type in Greater Poland, also deserve particular attention.

The earliest mention of Golejewko (known as Czestram at that time) was found in a papal bull issued by Pope Innocent II in 1136. In the Middle Ages, it served as an important fortified settlement and the seat of a castellan. It was located near the boundary with Silesia, by a trade route connecting Silesia with Greater Poland. The name Golejewko appeared for the first time in 1296; it was used interchangeably with the name Czestram.

From 1486 to 1663, Golejewko and the adjacent villages were the property of the Awdaniec-Chojeński family. In 1495, a manor house was mentioned by written records for the first time. In 1620, Andrzej Chojeński filed a complain concerning a raid on the estate; the complaint mentions a castle, gates, earth ramparts, and manor farm buildings in Golejewko. One year later, in order to commemorate the battle of Chocim (1621), Chojeński had a symbol of a star and crescent moon placed atop the gate building; it has survived to this day. He also donated the spoils of war captured from the Turks to the church. In 1663, Chojeński’s daughters sold Golejewko to Władysław Rogaliński of Smolice, a cup-bearer (Polish: cześnik) from Inowrocław. A survey conducted in 1666 showed that there were a wooden manor house and a gatehouse, among other things, in Golejewko. Konstantyn Rogaliński (1701-1768), the castellan of Nakieł, extended the wooden manor house standing opposite the gate building with brick and stone corner extensions. Subsequently, using the extensions as a basis, he constructed a two-storeyed brick and stone manor house, occupying the southern side of the courtyard. He also established an Italian garden in the marshy areas surrounding the manor house on the south side.

In 1846, Golejewko was purchased by the Czarnecki family. In the years 1848-1852, they conducted alteration works on the gate building, erected by the Chojeński family, and built the Rogaliński palace; they also built a complex of farm buildings in the vicinity. All the buildings were unified stylistically through the addition of polygonal turrets and pinnacles, inspired by Gothic-Renaissance English mansions in the Elizabethian style, built in the 2nd half of the 16th century. The formal garden was also extended at that time through the addition of landscape sections.

The gate tower was erected in the late 15th and early 16th centuries; in the 18th century, it was enlarged with residential quarters. In years 1848-1852, it was modified and converted into a granary decorated in the Elizabethian style. In the 1970s, it was adapted as an amenity and office building; today it also houses an exhibition room.

The gate building communicates with a single-storeyed outbuilding with a Neo-Gothic crenellation, built in the late 16th or early 17th century. The brick and stone walls of the outbuilding are covered with plaster. In the years 1848-1852, an ice house was built; it has an octagonal floor plan and brick plastered walls.

In 1921, Janusz Czarnecki established a famous Thoroughbred (English purebred) horse breeding farm and in the years 1924-1925, he erected new stables, most of which have since been dismantled. After his death in 1933, his widow, Romana Czarnecka, managed the estate until the onset of World War II in 1939.

After 1945, the Golejewko manor was nationalised and taken over by the State Horse Breeding Holding. Today, the palace, park, and manor farm complex is the property of the “Golejewko” Horse Breeding Farm.

The palace and manor farm complex in Golejewko consists of a palace situated in the west part, a park located in the south part, and a manor farm in the east part; together, they form a roughly square shape.

The palace is located on the south side of a ceremonial courtyard which has a round decorative lawn in the centre and which features a marble statue of Samson from 1768. The courtyard is accessible from the north via a decorative bridge. The palace is separated from the park by a moat, with a bridge spanning its southern section. The gate building is located in the eastern part of the courtyard. North of the gate tower, there are a number of outbuildings: a residential building, a cellar, and an ice house. The walls separating the more elegant part from the farm extend out of the eastern corners of the gate building.

The palace, built in the Elizabethian style with Baroque influences, has a floor plan in the shape of an elongated rectangle. Its walls are covered with plaster. The towers have a post-and-beam structure with brick infill. The two-storeyed, seven-axis main body of the palace is flanked by two towers and one-storeyed wings. The building is covered by a hip roof with a gable on the north side; on the north side, it is enclosed with a balustrade adorned with pinnacles. The building has a two-bay interior layout with a hall and stairs located in the centre.

The two-storeyed gate building has a square floor plan and a post-and-beam structure with brick infill. The gateway features a cross-barrel vault. In the western section, there is an octagonal tower. The gate is flanked by ground floor chambers covered with barrel vaults with lunettes. The gate building communicates with a single-storeyed residential outbuilding with a Neo-Gothic crenellation, built in the late 16th or early 17th century. The brick and stone walls of the outbuilding are covered with plaster. In the years 1848-1852, an ice house was built; it has an octagonal floor plan and brick plastered walls.

The park, established in a marshy area in the 1st half of the 18th century and extended in the 2d half of the 19th century, consists of a formal section located south of the palace and landscape sections flanking the building. The main, north-south path of the park runs in a line with the central axis of the palace façade facing the garden; it runs through a decorative gateway and across the southern bridge spanning the moat, passing into a linden avenue, now habitually referred to as the Alley of Distinguished Horses, leading towards Golejów. In the south-western section of the park (formerly an orchard), separated from the rest of the park with a line of decorative trees, there are a gardener’s house and an associated utility building. The gardener’s house, made of brick and plastered, features a decorative wooden gable and a balcony and dates back to the early 20th century.

Scattered around the large courtyard are a number of long, low outbuildings (stables, cowsheds, and barns). Near the gate building, there are four shorter buildings, connected by means of a wall and a gate. Between them, on the side of the so-called old road, there is an access road to the manor farm courtyard. Another drive is located in the north-west corner of the manor farm courtyard; it runs from the so-called little market where houses for farm workers were built.

compiled by Tomasz Łuczak, Regional Branch of the National Heritage Board of Poland in Poznan, 17-11-2014. 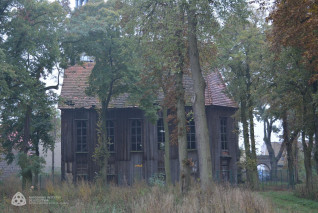 Complex of the former Evangelical Church of Mount Tabor 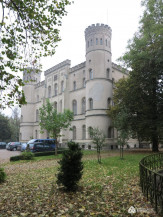 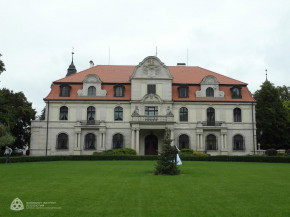 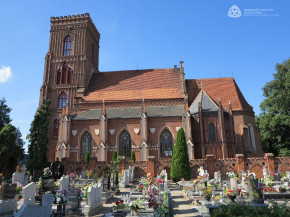 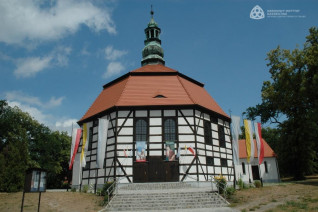 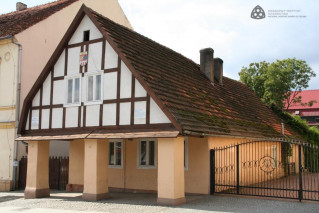 The parish church of St Peter and Paul 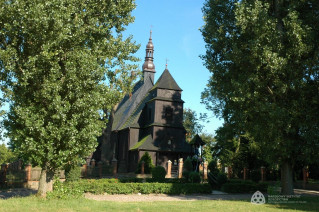 Church of St Michael the Archangel