Parish church of St Florian and Nativity of the Virgin Mary

A leading representative of “Lublin Renaissance”, a style featuring architectural solutions going slightly beyond the canon of the “Lublin type” (brick facades, two towers and a recessed gable of the facade) representing architecture from the circle of Jan Wolff. Listed together with the church, the Loreto chapel is an equally excellent example of the Mannerist Baroque architecture of the 1630s, with lavish architectural/sculptural decorations (architect Piotr Likkel ?).

The present Renaissance-Mannerist parish church of St Florian and St Catherine in Gołąb was built with the participation of builder Jan Wolff in the years 1628-1636 on the site of a former wooden church of St Florian, founded together with a second church of St Catherine by King Casimir the Just in 1173. In 1419, the two parishes were combined and dedicated to both saints. The brick church built through the efforts of the parish priest, the Rev Symone Grzybowski, with funds donated by Crown Chancellor Jerzy Ossoliński, was consecrated in 1638. It was damaged in 1656 during the Battle of Gołąb, and after the 1720 flood it was reinforced with embankments at the chancel. In 1856, the Baroque four-sided cupolas were replaced with the existing ones. During World War I, it was partly destroyed. It was restored in the 1920s and again after World War II. A comprehensive repair was carried out in 1989-1996 and 2010-2013 (change of the interior colour scheme).

Founded by Jerzy Ossoliński, the Mannerist-Baroque chapel known as the “Loreto House” was built in the years 1636-1638 as a modified local “copy” of the Loreto original, maybe by Kazimierz-based architect Piotr Likkel, supposedly the author of the sculptural decoration completed ca. 1644. The chapel underwent restoration in 1985-1987, during which the original terracotta figures in the recesses were replaced with copies (the originals are kept in the church), and in 2010-2013 (change of the colour scheme) .

The church is situated in the centre of the village on the eastern side of a narrow square, which was converted into a garden square and a street (Żuławy St.). In the north-western part of the cemetery, fenced by a brick wall with a gate in the church axis, there is the chapel of Our Lady of Loreto, known as the “Loreto House”.

The oriented church is made of brick, with brick facades and details rendered in plaster, plastered interior. Single-nave aisleless body with four bays featuring arcaded niches. From the east, the nave is closed by a short semi-circular presbytery, separated from it only by a flanking pair of projecting columns. The western part of the body ends with two massive square towers, with a narrow vestibule between them. Halves of the towers project to the sides from the perimeter of the body. Added to the first bay of the body is a single-level sacristy with plain-plastered walls. The wall system of the nave consists of deep, blind arcades flanked by pairs Corinthian columns abutting the walls, resting on common pedestals. They are supported by massive, full entablature, broken above the columns, with a wooden gallery above the cornice, interrupted at the apse. Running on the outside above the arcades are straight corridors - shooting galleries - roofed on the outside. The vaults in the nave and in the presbytery are of the barrel type, with lunettes, decorated with “Lublin type” stucco work, complemented in the smooth-profiled nave with relief busts of the apostles and evangelists in oval fields, and plaques with winged angel heads and heads of kings in the frieze. The musical choir gallery is supported by a single semi-elliptical arch topped with a wooden parapet of the choir, with a pair of small columns inserted in it, supporting the corners of the overhanging wooden section of the gallery.

Facade: The lower part of the two-tower, three-axis church facade is decorated with four giant order composite pilasters with the entablature frieze decorated with strapwork. The upper storeys of the towers are flanked by Corinthian pilasters supporting entablature with identical decoration. The lower parts of the towers have two storeys, framed in flat arcades with blind window surrounds in the form of narrow aediculae; the middle section of the facade is framed with a full-height arcade - situated in its axis is a arcaded portal with a pair of engaged columns and a Mannerist top section, merging into a square oculus surround flanked by herm pilasters, with a window in the aedicula above. The facade gable, recessed to the rear line of the tower walls, is preceded by a pent roof above the choir section. It takes the form of a three-axis aedicula supported by a pair of grooved composite engaged columns with a segmented pediment at the top and a pair of conch niches flanking it, with volute ornaments on the sides. The interrupted entablature zone of the aedicula is filled with a relief tondo featuring the IHS monogram in a fiery glory. The gable is topped with three obelisk-type pinnacles. The towers are covered with bulbous cupolas of the lantern type, topped with crosses.

The two-storey side facades with a slightly recessed upper storey, covered at the bottom with a pent roof above the shooting gallery in the entablature strip of the lower storey. The arcade divisions of both storeys and the decoration of window surrounds are identical as the decoration of the towers, with additional entablature above the lower storey in the Doric order, featuring strapwork applications under the capitals. The upper pilasters follow the Ionic order.

The semi-circular wall of the presbytery is separated from the body by a wall recess merging at the into a volute gable topped with a segmented pediment covered with a short roof of the presbytery. The three-axis presbytery wall, with window openings at two levels, is divided by buttresses intersecting a high plinth. All windows are rectangular in window surrounds with pediments, the lower windows are strongly elongated, and the central axis features two imitation blind windows.

The sacristy facades are provided with corner lesenes.

Fittings: 2nd half of the 18th century - architectural main altar, 2 side altars 2nd quarter of the 17th century - a pulpit integrated with two confessionals, pipe organ casing, pews, and 6 original terracotta figures of prophets from the Loreto House.

Loreto House with a chapel

Made of plastered brick, erected on a plan of two eccentrically offset rectangles - the inner one is “Mary’s House”, a vaulted chapel separated from the outer architectural envelope by a twisted corridor with a separate vestibule and a narrow staircase at the north-western corner. A single-storey building with as crypt under its central part, elevated by a storey-high attic hiding a butterfly roof.

The single-space interior of the chapel with the side walls topped with a cornice, covered with a barrel vault, is split into three functional components including a distinct altar component with a floor level elevated by three steps and a shall zone behind a brick altar, once separated by a wooden lattice with gates. Plain walls with an exposed brick face at the bottom; in the altar component, there is a pair of small cabinet niches. Two opposite entrances in the nave component and a third one on the south side in the zone behind the altar.

The ground floor facades of the longer walls are divided by three, and the shorter ones by two, pairs of Ionic order columns abutting on the walls , supporting full entablature projecting above them. Between the columns, there are conch niches with figures of sitting prophets framed with an aedicula topped with the broken pediment with an angel figure in the break. Situated axially between the pairs of columns of the longer walls, there are two identical entrances with portals featuring volute-shaped cartouches in the frieze section. The portals are flanked by relief figures of saints in surrounds. Above them, there is a wide rectangular frame decorated with the same cymatium motif. A larger frame is provided in the side facades, with the upper corners indented perpendicularly, featuring angel figures. The bottom section of the frame on the western wall has a rectangular window. The tall, two-section attic in the form of a wall projecting above the pilaster pairs, decorated with the balustrade motif in the bottom part and profiled frames in the fields above, and windows in surrounds with a cornice above the windows, and blind windows in the corner sections. The attic projections are topped with broken pediments with gargoyles in the breaks and pairs of pinnacles.

The church can be viewed from the outside.

compiled by Roman Zwierzchowski, Regional Branch of the National Heritage Board of Poland in Lublin, 27.11.2015. 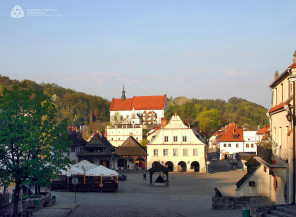 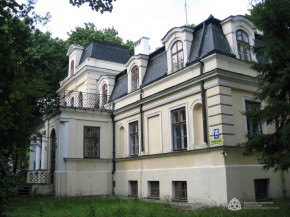 The Ukraina (Ukraine) villa, currently serving as a guest house 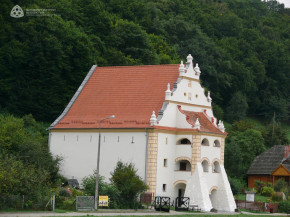 Granary, currently used as the Natural Museum – a branch of the Vistula Riverside Museum 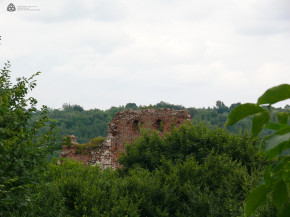 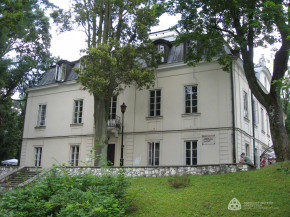 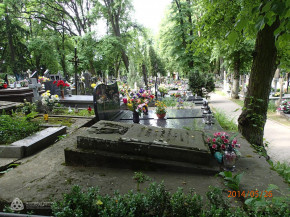 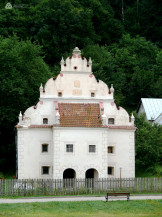 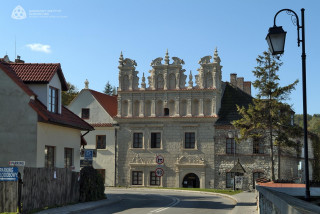