The church is one of the most valuable and representative examples of wooden ecclesiastical architecture of the so-called Silesian-Lesser Poland variety.

The church was erected in 1545 in Rychwałd, for the funds provided by Krzysztof Komorowski, the erstwhile lord of the manor. The building was consecrated in 1547 by bishop Erazm Ciołek. Somewhere around the year 1641, the church was extended, with the construction and design works carried out by Jerzy Wiśnicki, a master carpenter from Żywiec. It was also during that period that the tower was erected. In 1757, following the construction of a new, brick church in Rychwałd, the church of St Andrew was relocated to Gilowice. In 1895, the existing flat ceilings were replaced with false vaulted ceilings created by Jan and Wojciech Szwed from Pewel Mała. In the years 1933-1934, further transformations of the building took place, including the extension of the nave, the addition of the chapel of the Sacred Heart of Jesus as well as the reconstruction of the cloister-like walkway surrounding the church, known traditionally as the soboty, which had been modified in both 1901 and 1912.

The church is located in the centre of the village of Gilowice, by the road leading from Żywiec to Ślemień. A line of ancient oaks, more than 700 years old and enjoying legal protection as natural monuments, rise to the north of the church itself. An old cemetery and a monument to the local residents killed during World War I can be seen right next to the church. The churchyard is surrounded by a perimeter fence made of rough-hewn wooden boards supported by brick posts. A pair of wooden gates facilitates access to the yard.

The church, oriented towards the east, was designed as a log structure made of fir wood. Designed on an elongated plan, the church consists of a rectangular nave and a chancel with a polygonal end section. The northern and the southern sides of the chancel are adjoined by the sacristy and the chapel of the Sacred Heart of Jesus respectively, both likewise designed as wooden log structures. The western façade of the church is dominated by a slender, tapering tower erected on a square plan, designed as a post-and-beam structure with an overhanging belfry and topped with a slender spire. The row of vertical wooden boards covering the sides of the belfry is adorned with a decorative fretwork pattern at the bottom. A rectangular double door is positioned at the base of the tower, at its very centre. The doorway is protected from the elements by a wooden rooflet. The walls of the nave are pierced with widely spaced rectangular windows. A hexagonal turret rises above the chancel, crowned with an openwork, hexagonal roof lantern with a bulbous cupola. The body of the church is circumscribed with a wooden, cloister-like walkway. The walls of the nave, the chancel and the annexes are all clad with weatherboards.

The nave and the chancel feature a single gable roof, clad with wood shingles. The spire crowning the tower and the steeple both feature sheet metal cladding. The western part of the nave features a flat wooden ceiling, with upper logs of the chancel side walls running along the entire length of the nave. These logs, encased with wooden boards, give the side sections of the ceiling a “dropped” appearance. The interior of the church was designed in the Baroque and Classicist styles. The wooden altarpiece, designed in the Late Baroque style, dates back to 1708 and incorporates the painting of the Virgin and Child with St. Anne, dating back to 1706, as well as a sculpture of St Barbara from the 1st half of the 16th century. The Early Baroque pulpit originates from the first half of the 17th century. The stone baptismal font from the year 1440 is adorned with the Korczak coat of arms, a reminder of the benefactors of the church - the House of Komorowski. In the attic, traces of polychrome decorations from ca. 1635 can still be discerned, their author being most likely Fabian Sobinowicz from Żywiec. The church comes equipped with a pair of bells dating back to 1535 and 1584 respectively, with the older bell having been cast by bellfounders from Cracow.

compiled by Sabina Rotowska, Regional Branch of the National Heritage Board of Poland in Katowice, 17-11-2015. 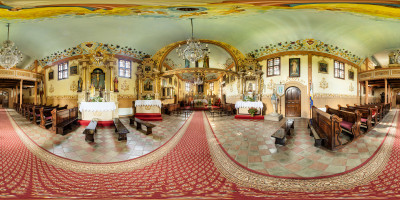 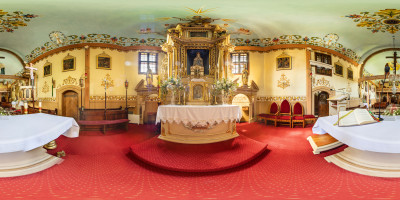 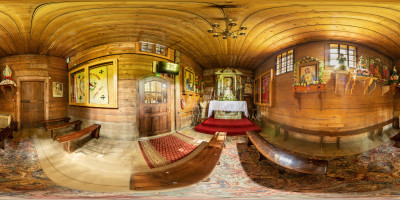 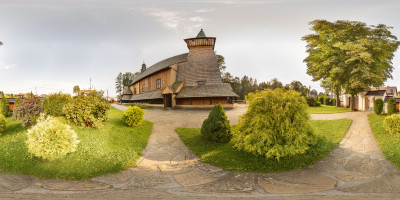 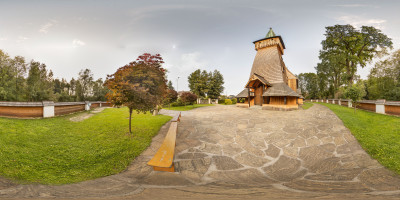 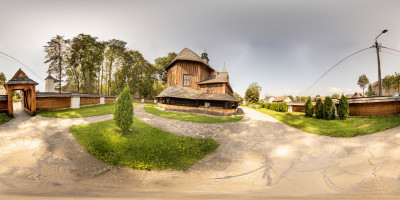 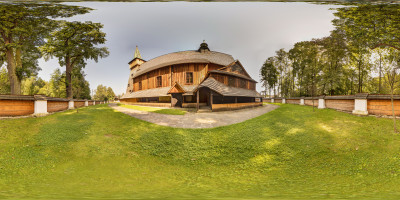