The Oliwa abbey evolved over the period lasting from the twelfth to the eighteenth centuries. It is a unique monument of high authenticity. Its basic framework comes from the Middle Ages. Already at that time the spatial arrangement, characteristic of the Cistercian rule, was put in place: next to the monastery church, there is a monastery complex with cloisters and garth, outbuildings belonging to the convent and abbot, monastery wall with a gate, a parish church with a cemetery for centuries under the Cistercian patronage. All this has been preserved. In the modern times, an abbey residential complex was erected with a palace, orangery and garden.

Stylistically and programmatically, the architecture of the monastery church refers to the great brick Gothic constructions of Western Pomerania, Denmark and Northern Germany, although elements of the original Romanesque style have been preserved in the monumental Gothic structure. The foremost rank of this church artistry is also evidenced by the rich, almost complete furnishings and decorations created by the most eminent artists of the Mannerism and Baroque times active in Pomerania: Abraham van den Blocke, Herman Han, Jan Wulff from Orneta and others.

The abbey is a place of special historical importance through a connection with significant events and important historical figures. This oldest in Gdańsk Pomerania monastery foundation of Gdańsk viceroys of the Piast dynasty was for them the first step on the road to gaining political independence and a princely title. Since its inception, it was a necropolis of the dynasty (there are the graves of the rulers of Gdańsk Pomerania: Sambor I, Mściwój, Świętopełk and Mściwój II), later - subsequent abbots, and in recent decades - bishops. In Oliwa and for Oliwa, documents were created which constitute the oldest group of written sources relating to Gdańsk Pomerania. On October 7, 1587, King Sigismund III Vasa signed in Oliwa Pacta conventa, and on May 3,1660, in the Little Refectory, a treaty was signed between the Commonwealth and Sweden, called the Oliwa Peace. The tradition of commemorating this event continues to this day, and the Peace Room is one of the rooms of the diocesan museum. Oliwa was visited by: Przemysł II, Casimir IV Jagellon, Sigismund III Vasa Władysław IV and his wife, Ludwika Maria Gonzaga, John II Casimir Vasa, Augustus II the Strong and Augustus III.

In 1186, the Duke of Gdansk Sambor I funded the Cistercian monastery as a direct branch of the Pomeranian Kołbacz. In the first quarter of the thirteenth century, a small oratory was established, which was the beginning of the presbytery of the Romanesque basilica (the present temple’s first two spans on the western side). In the first 75 years of the thirteenth century, the width of the presbytery and the width and length of the transept were formed. In the third quarter of the thirteenth century, the eastern wing of the monastery was built with the dormitory upstairs. The Late Romanesque extension led to the formation of a church that already had all the basic functional elements. Construction of the parish church dedicated to St. Jacob (expanded in the fifteenth and eighteenth century) and the south-eastern section of the walls around the abbey, took place at the beginning of the fourteenth century. The Gothic period led in several stages to the emergence of the present shape of the church. The last gothic element is the six-sided, two-level chapel of the Holy Cross, which was erected at the southern bypass in the fifteenth century. In addition, the House at the Gate, Szafarnia (Wardrobes Room), cellars and the basement of the Old Abbots Palace were built in the fifteenth century.

In the modern period (after the destruction of 1577), the system of supporting arches was removed in the monastery church, new roof trusses were made and the vaults rebuilt (in the transept in 1581; in the central nave in 1582). At the same time, the reconstruction of the destroyed monastery buildings was carried out: the Great Refectory, the monastery kitchen, the granary and the brewery. In 1608, anovitiate was built as well as a new defensive wall around the church and monastery. In the years 1610-12, arectangular chapel of Five Wounds was erected, and St. Mary's Chapel in the early seventeenth century. In 1626, as a result of the devastation of the monastery property by the Swedes, some of the Renaissance furnishing of the monastery church (pulpit, altar, baptistery and pipe organs) was lost. In 1660, inthe so-called a small refectory of the Oliwa monastery, the Commonwealth signed a peace treaty with Sweden called the Peace of Oliwa. At the end of the seventeenth century, the brewery building was added to the west façade of the monastery church. In 1723, the Abbots Granary was erected. During the reign of Abbot Jacek Rybiński (1740-1782), many elements of the interior of the church were constructed, the New Abbots Palace was built, while the garden was enlarged and re-shaped. In 1772, during the first partition of Poland, the Oliwa abbey was annexed to Prussia and the monastery goods were confiscated. At the end of the eighteenth century, on the initiative of the head abbot, Karol Hohenzollern-Hechingen, the Potsdam gardener - Johann G. Saltzmann, the son of the court gardener of the Prussian King Frederick II, re-developed the north-eastern part of the abbots’ garden, giving the final shape to the project. At that time, the Abbey Stable with Coach House was also built. During the Napoleonic campaign, a lazaret was set up in the monastery (1807 and 1813). In 1831, the final dissolution of the monastery took place - a parish was established at the monastery church, and the church of St. Jacob was handed over to the Evangelical community. In 1925, the Gdańsk diocese was established and the parish church was raised to the rank of the cathedral.

World War II did not cause much damage. As a result of the fire, the interiors of the New Abbots Palace and Szafarnia (Wardrobe Rooms) were burnt out (rebuilt in 1958-65). The cupolas of Gothic towers of the west facade of the cathedral were also destroyed (rebuilt in 1971). In 1957, the Gdańsk Seminary was established in the monastery buildings, and the diocesan museum was opened in 1975.

The Oliwa post-monastery complex is located on a flat terrace at the foot of the steep edge of the moraine upland, about2 kmfrom the sea coast and about8 kmfrom the centre of Gdańsk. The Oliwa Stream (Jelitkowski Stream) that flows into the Gulf of Gdańsk runs through this area.

The complex consists of: the Gdańsk Archdiocese of the Holy Trinity (former monastery church), adjoining on the southern side post-monastery buildings around a four-sided garth, incomplete circumference of the inner defensive walls, a group of outbuildings located on the south-eastern side of the monastery (Szafarnia, a monastery granary), Old and New Abbots Palace, Abbey Granary and the Abbey Garden - currently the area of Adam Mickiewicz park, together with the Orangery, Abbey Stable and Coach House and the preserved section of the outer ring of defensive walls, as well as the parish church of St. Jacob and the House at the Gate (the Plague Gate).

The centre of the complex and its most valuable element is the archcathedral - a brick three-nave basilica with transept, a five-span three-sided closed presbytery with a bypass. The whole interior is vaulted, star-shaped forms dominate, in the southern nave - cross-rib vault, in the bypass - on three supports. Unique elements of architectural detail in styles ranging from Romanesque to late Baroque have survived. The church decor consists of three marble portals from the second quarter of the seventeenth century and eighteenth-century matronea. The movable furnishings of the church come mainly from the late Renaissance and the Baroque period. It consists of the main altar, a group of 20 side altars (sixteenth-seventeenth centuries), pulpit (second half of the eighteenth century), two stalls and eleven benches (around 1600 and 1612), two pipe organ facades (second half of the eighteenth century), a marble lavabo (1635), a portrait cycle of founders and benefactors (beginning of the seventeenth century), a complex of 23 religious paintings in the main nave, a complex of gravestones, epitaphs and tombstones. The whole is complemented by two chapels with a baroque decor, the work of the Sopot stucco master Ignacy Müller from 1745-46, and the chapel of St. Mary with a Baroque altar and the decor from the beginning of the twentieth century.

On the southern side of the church, around a square garth surrounded by cloisters on four sides, a three-wing, two-story, brick building of the monastery was erected. Within the cloister with cross vaults from the second half of the fourteenth century, several Gothic profiled ogival portals and a set of baroque portals have been preserved. In the eastern wing of the monastery are the oldest, thirteenth century rooms: sacristy with a cross vault and a vaulted cradle, a chapter house with a gothic six-ribbed cross vault supported by two octagonal granite columns with early Gothic bases, a vaulted entrance leading to the garden, two narrow solitary confinement cells (with ogive cradle) separated by stairs to the dormitory and a small corner room of brothers (polychrome cross vault). In the southern wing there is the largest and most representative interior of the former Oliwa monastery - the Great Refectory, vaulted with a late Gothic ribbed vault supported on three Tuscan columns - containing a group of 50 portraits of abbots, eight wall paintings with scenes from the life of Saint Bernard of Clairvaux (late seventeenth century) and paintings depicting good works (eighteenth century). A lavatorium building adjoins the southern cloister, and in the west wing there is, among others, the Small Refectory - so-called Peace Room, in which a peace treaty with Swedes was signed in 1660.

The high value of the integrity of the whole concept is completed by the area of the former Abbey Garden - currently the Adam Mickiewicz Park, including of the Abbey Garden preserved in historical boundaries, together with the area added at the beginning of the twentieth century. It was shaped in the second half of the eighteenth century, during the reign of two consecutive abbots - Jacek Rybiński and Karol Hohenzollern, for whom worked well-known gardeners: Kazimierz Dembiński (Dębiński) brought from Wilanów and Johann G. Saltzmann from Potsdam. In the south-eastern part of the garden, a late Baroque composition based on a two-axis system, the longer of which - a unique, illusionistically resolved axis of view is directed towards the sea. On the other hand, the north-western part was arranged in the then fashionable Anglo-Chinese style. It was the first example of this style in Poland. Currently, efforts are being made to restore the missing elements of small architecture (pavilions, bridges, gates). 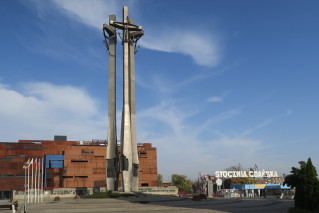 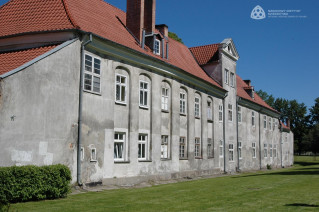 The almshouse for orphans and elders 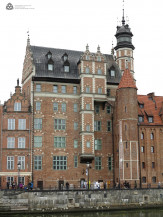 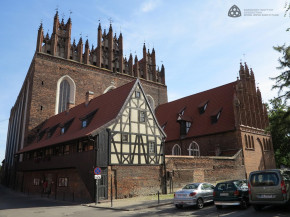 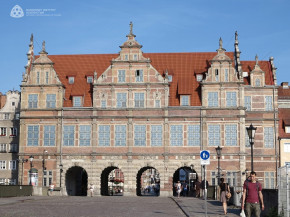 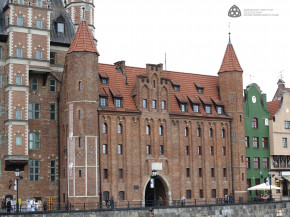 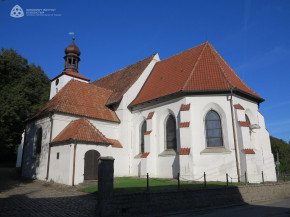 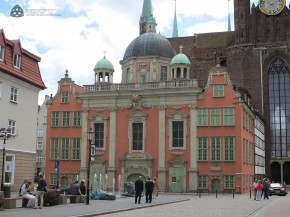 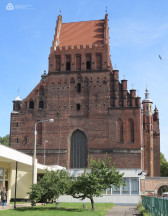