A rather austere, rural wooden church from the Baroque period. The building belongs to a group of hybrid designs combining timber-framing with post-and-beam structure, more frequently seen in Greater Poland and Silesia. Inside, the church features a profusion of lavish painted decorations, with some of the imagery exploring themes related to the life and teachings of St Augustine.

Back in 1136, the village of Gąsawa remained under the jurisdiction of the archbishop of Gniezno. In 1145, count palatine Dzierżykraj of the Nałęcz coat of arms donated it to the Canons Regular of Trzemeszno. The local parish is known to have existed from at least 1357, as evidenced by the mention of a man named Mikołaj, the local parish priest, which exists in the surviving historical documents. In 1362, the archbishop of Gniezno allowed the abbot to appoint the friars from the Trzemeszno monastery as administrators of the Gąsawa parish. The architectural and dendrochronological analysis performed so far suggests that the construction of the church, designed as a wooden log structure, commenced towards the end of the first quarter of the 17th century or at the start of the second quarter thereof. In 1674, the church underwent a comprehensive restoration, with the necessary funds being provided by Kazimierz Brzechwa, the erstwhile abbot. Funds for the construction of the main altarpiece were donated in 1687. Between 1697 and 1699, the log walls were given additional reinforcement in the form of a surrounding timber frame; the reason for this decision was that the structure of the church had been weakened when its windows were enlarged and required additional strengthening measures to be applied. In years 1817-1818, the family tomb chapel of St Anthony of Padua was erected on the northern side of the nave, with the funds for its construction being provided by Ignacy Zdębiński and his wife Urszula. It is believed that the existing chancel windows were also added during that period.

In 1830, the church was in a poor technical condition, leading the erstwhile parish priest, reverend Wojciech Szredziński to file an application for the demolition thereof. However, the Prussian authorities denied his request. In years 1856-1857, the church was restored; the organ gallery was replaced, the door layout in the chancel was modified, while both the steeple and parts of the roof truss have been dismantled and replaced with new ones. The original wood shingle roof cladding was replaced with slate. Parts of the interior walls received a new, plaster finish.

A comprehensive set of conservation works was carried out inside the church in the years 1998-99. Between 2003 and 2006, further renovation works were conducted, allowing the complete interior décor from the 17th century and the early 18th century to be restored, its most notable feature being the original frescos.

The church is located in the middle of the village, on the northern side of the former market square. The church is surrounded by the former parish cemetery. A mid-19th century wall serves as the northern boundary of the churchyard. On the western side of the church there is a wooden bell tower originally erected in 1764 and reconstructed in 1945 on the basis of the original design. A statue of the Virgin Mary with Child standing on a plinth is positioned in the south-western part of the churchyard; the sculpture, dating back to 1866, was inspired by Raphael’s painting of the Sistine Madonna. North of the cemetery lies the rectory, its design bearing the hallmarks of the Classicist style. The building was erected in 1815, based on the existing foundations of an earlier structure which had existed there from the late 17th/early 18th century.

The church is oriented towards the east, deviating slightly from the east-west axis. It is a single-nave structure, its chancel featuring a polygonal end section. A porch adjoins the southern side of the church, while a chapel and a sacristy are positioned on its northern side. The nave was designed on a roughly square floor plan. The chancel, narrower than the nave, features a polygonal end section. A brick chapel designed on a circular plan adjoins the middle section of the northern façade of the nave; the chapel and the nave are connected by an aperture topped with a segmental arch. A small porch designed on a roughly square plan is positioned on the southern side of the church. The chancel is separated from the nave by a rood beam, with the rood arch above the beam featuring a distinctive, pelmet-like serrated outline. From the outside, the chancel is easily discernible due to the presence of a low, multi-faceted roof, despite the fact that the height of the chancel is equal to that of the nave. The nave, slightly wider than the chancel, is covered with a gable roof surmounted by a steeple positioned at the western edge of the roof. The southern side of the nave is adjoined by a low porch with a gable roof, whereas on the northern side there is a cylindrical tomb chapel - a solid brick structure, taller than the nave and covered with a flattened faux cupola. The northern side of the chancel is adjoined by a significantly lower sacristy, covered with a shed roof. The church features a somewhat unusual structural design, consisting of an inner structure made of larch logs, which is enveloped by a frame consisting of vertical posts, transoms as well as cross and angle braces. This post-and-beam outer structure has no infills between the timbers and is concealed beneath a board and batten siding. Both the inner and outer layer of the structure sit on the same sill plate.

The western façade is topped with a triangular gable, separated by a horizontal batten. The gable incorporates a pair of tiny square windows adorned with narrow surrounds. The rectangular doorway positioned on the middle axis of the front façade is framed by a broad, profiled wooden surround with a hood. A small, square window can be seen directly above the entrance door. The northern façade is dominated by the cylindrical structure of the tomb chapel, positioned on stone foundations. The chapel features a segment-headed entrance positioned on its middle axis. An oval window can be seen above the entrance, in the upper section of the wall. The sides walls of the structure are pierced with a single window on each side, positioned in the upper section of the wall and topped with a round arch. The sacristy adjoining the chancel features a rectangular doorway in its northern wall as well as a small, rectangular window in the eastern façade. The northern diagonal wall of the chancel features an oculus with a broad, square-shaped surround, while the southern diagonal wall is pierced with a single, octagonal window. The southern façade of the church is adjoined by a porch positioned on the middle axis of the nave, topped with a triangular gable. The rectangular entrance door of the porch is framed with a broad, profiled surround. The porch is flanked by a pair of rectangular window openings with fretwork surrounds surmounted by segmental hoods. Two windows of identical design are present in the southern wall of the chancel.

An octagonal steeple with rectangular, louvred openings can be seen jutting from the western edge of the roof ridge, with the upper section of its octagonal pyramid roof featuring a steeper incline that its lower section, lending the spire a tapering appearance.

Inside, the church features a collection of fixtures and fittings designed in the Baroque and Mannerist styles. The walls and the ceilings are adorned with lavish painted decorations, their various sections dating back to somewhere around the mid-17th century, years 1705-06 as well as ca. 1817 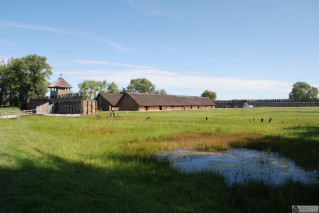 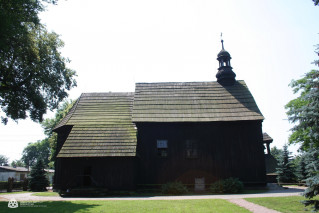 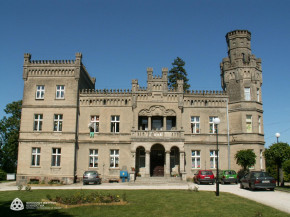 Palace, currently serving as the Caritas Orphanage maintained by the Gniezno archdiocese 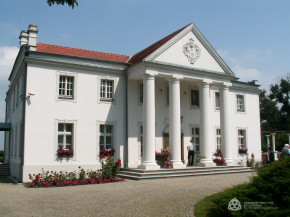 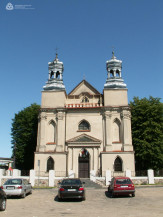 The parish church of St Dorothy 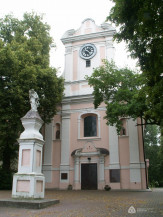 The church of St Thomas and the monastery of the Observant Franciscan friars, currently known as the parish church of St Nicholas 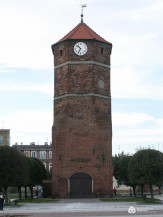 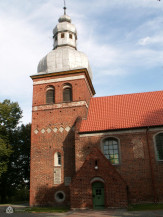 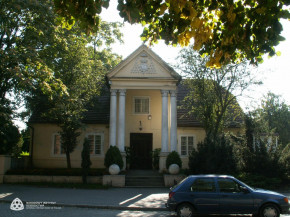