The graveyard complex of St Roch is one of the most valuable and best preserved complexes of this type in the region. At the same time, it is the oldest preserved necropolis of Częstochowa in which many prominent and distinguished persons connected with the history of the city have been buried. The complex is also valuable due to its clear and unaltered historical layout and its well-preserved, historic graves, being important examples of funerary art from the 2nd half of the 19th century onwards on a regional scale.

The graveyard of St Roch was established in 1641 on the initiative of the contemporary provincial superior of Pauline Fathers, Andrzej Gołdonowski, possibly for the purpose of burying victims of epidemics and pilgrims who died on their way to Jasna Góra. Simultaneously with the establishment of the graveyard, the first Chapel of St Roch, made of brick, was built in the years 1641-1642 on the initiative of Fr Roch. The chapel was destroyed in 1653 during the Swedish siege of the Jasna Góra Monastery. The present church, dedicated in 1680, at first having only one tower, was erected in its place. The initially small graveyard was extended for the first time in 1737. In 1767, it was enclosed with a wall, which was subsequently rebuilt in 1795 after it was destroyed during fights related to the Bar Confederation. In the years 1783-1785, the Church of St Roch underwent major alterations, including the construction of a new, two-tower facade, the addition of a morgue, and the construction of barrel vaults inside the church. In the 1st half of the 19th century, the present porch was built onto the front façade of the church. In 1862, a small Evangelical-Augsburg graveyard was established on the north west side. In 1898, part of the already existing Evangelical graveyard and of the Catholic graveyard was isolated for the purposes of an Orthodox military graveyard, which was then closed in 1919. In 1925, a parish was established at the Church of St Roch. After 1969, the graveyard was extended twice towards the west direction.

The graveyard complex of St Roch is located in the west part of the city, at the intersection of St Roch Street and St Jadwiga Street, in the territory of the village of Częstochówka, by a former route leading from Jasna Góra to Kłobuck. The necropolis, covering an irregular plan, consists of three separate graveyards, i.e. the largest, Roman Catholic one, the small Evangelical one on the side of St Roch Street, and the military graveyard on the side of St Jadwiga Street.

The protected, historic part of the Roman Catholic graveyard consists of a net of 90 irregular graves, diversified in terms of shape and size, arranged in rows. Entrance to the graveyard is possible through two gates, with the east gate being made of metal and framed by a simple, stone portal and facing St Jadwiga Street and the west gate, also made of metal, facing St Roch Street. The oldest preserved graves, located in the oldest parts of the graveyard, nearby the Church of St Roch, date back to the middle of the 19th century and the 2d half of the 19th century. Particular graveyard avenues are lined with old trees, the majority of which are thujas, oaks, maples, and linden trees.

In the north-east part of the graveyard, there is a 17th century Church of St Roch and Sebastian, made of stone. It is a non-oriented structure, build on a rectangular floor plan with a narrower, square chancel on the north-east side and small, rectangular annexes, including: a sacristy in the west part of the chancel, the former morgue beside the east part of the nave, and the entrance porch in the front. The following elements can be identified in the church structure: a single nave covered with a gable roof, with the front part featuring two towers topped with hexagonal bulbous roofs with lanterns, a slightly narrower and lower, cuboidal chancel covered with a similar roof, one-storeyed annexes topped with tented roofs: the sacristy and the morgue, and the porch, covered with a gable roof. The interior of the church, with an individuated, three-bay nave part, separated from the one-bay chancel by a semi-circular chancel arch, is covered with a barrel vault on arches with lunettes. The walls of the nave and the chancel were decorated with pilasters supporting the arches and the vault joints, and the walls adjacent to the ceiling — with round-arched window openings. Particular church façades are characterised by subtle Baroque design, limited to a low socle, a simplified broken entablature at the top, and profiled window casings. The front, two-storeyed, triaxial façade is divided by means of pilasters, decorated with bossage and fluting, and broken string courses. It is also embellished with niches containing statues of saints and a trefoil gable at the top. The preserved elements of the church interior include a Baroque main altar from the 1st half of the 18th century, Baroque side altars from the 2nd half of the 18th century, a Rococo pulpit from the 2nd half of the 18th century, and an 18th century music gallery.

The arrangement of the Evangelical graveyard occupying the north side of the complex was adopted to a net of avenues corresponding to the shape of the graveyard. Graves are arranged in rows along the avenues. The dominant feature of the graveyard is the Neo-Romanesque, one-storeyed, brick tomb of the Franke family, covered with a gable roof and situated in the north part.

The graveyard is open every day from the morning hours to dusk.

compiled by Agnieszka Olczyk, Regional Branch of the National Heritage Board of Poland in Katowice, 16-09-2014. 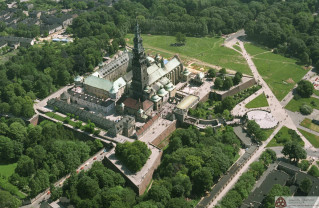 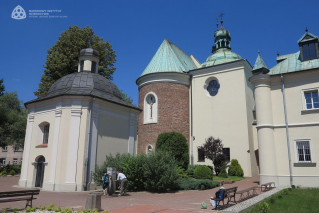 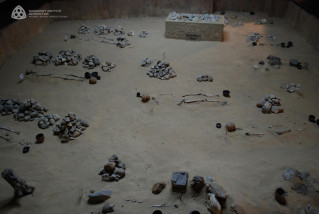 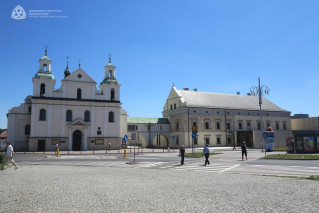 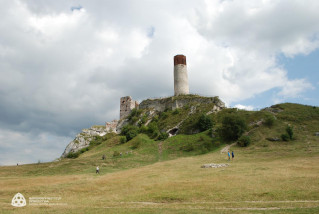 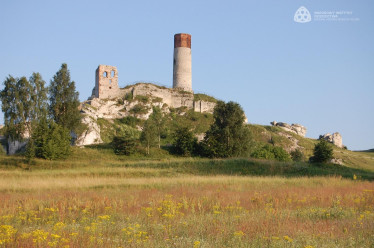 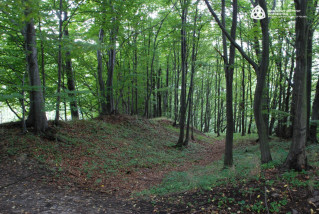 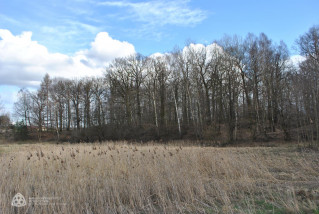