or Facebook Login Not registered yet? Register
Cumulus gallery Panorama

The church is one of the oldest surviving wooden Greek Catholic churches in Poland. It forms an example of a rare type of tserkva which features an external gallery running along the perimeter of the chapel, above the narthex. The wall paintings which survive in the nave of the tserkva constitutes a rare and priceless example of monumental murals painted in wooden Greek Catholic churches. The church boasts unique artistic features. The inclusion of the building on the world heritage list is a sign of appreciation and acknowledgement of its unique value.

According to the existing archival sources, the Greek Catholic tserkva in Chotyniec is the third such church that has been built in this particular village. According to the reporting documentation of the Greek Catholic church originating from years 1918, 1920, 1925 and 1928, the church in Chotyniec was erected in 1615 and consecrated one year later. Similar conclusions as to the date of its construction have been reached by specialists in the field of church architecture, based on the analysis of the building’s structure. Due to the absence of any other documentation that would serve to confirm the aforementioned chronology, the veracity of these conclusions cannot presently be verified. It has to be noted that records from 1824 state that the church was in fact built in 1733, although other sources indicate that the date in question is to be associated only with the renovation of the church, which appears far more likely. The wall painting in the nave was completed in 1735, while in 1753 the iconostasis was restored; its lower section was modified at that time, with a pair of new painted door reveals. The church was restored once again in 1858. In 1924, a belfry was erected on the parish cemetery near the church, replacing an older bell tower which was destroyed during World War I. In 1925, the church was extended through the addition of a porch. This modification resulted with the removal of some of the low arcades running alongside the exterior walls (traditionally known as the soboty) as well as of a part of the exterior gallery above the narthex. Inside, the modifications involved the cutting out of the western log walls of the narthex and the demolition of the choir gallery and the ceiling of the former upper chapel. In years 1945-1947, the building was used by the Roman Catholic Church. From 1947 onwards it stood abandoned and has begun to dilapidate, with temporary protective works performed in 1983. The bell tower, erected in 1924, collapsed in the 1980s. After the Greek Catholic church repossessed the temple in 1990, comprehensive renovation and conservation works were performed in 1991-1992 which involved, inter alia, the partial reconstruction of some of the architectural features that were removed in 1925. In 1993, the ruins of the collapsed bell tower were replaced with another wooden structure of this type, relocated from the village of Torki; this bell tower most likely originates from the late 17th or the early 18th century. After the year 2000, conservation works were performed with respect to some of the wall paintings and icons.

In 2013, the tserkva was included on the UNESCO World Heritage List (under the entry designated asWooden Tserkvas of the Carpathian Region in Poland and Ukraine).

The tserkva stands atop a small hill in the southern part of Chotyniec, at the edge of the village, approximately 200 metres east of the road from Chotyniec to Medyka. A cemetery is located behind the tserkva, towards the east; it is still in use. Area surrounded by a wooden fence; remnants of the former cemetery still present in the area. A wooden bell tower relocated from Torki stands in the north-western corner of the yard around the church. The church hill is surrounded by a group of old trees. The tserkva is oriented towards the east.

The building features a tripartite structure consisting of a chancel, nave and narthex; in the west, a porch built on an elongated rectangular base abuts the narthex. The floor plan of the narthex and nave has the shape approximating that of a square. The three-sided chancel in the east has two small rectangular alcoves opening towards the interior, located on the nave side, known as the pastoforia (the Prothesis and the Diaconicon).

The tserkva has a compact shape, made up of three main components covered with domed roofs, the centre section - the nave - being both the largest and the tallest. The entire structure is bound together by a pronounced skirt roof running around the perimeter of the building. The porch, built at a later date, abuts the tserkva from the west and is visually distinct from the rest of the structure.

The tserkva is made of wood; it stands on a foundation made of split stone. The foundation of the porch is made of brick. The church was built using wooden logs; the porch features a timber frame with wooden boards attached to both sides of the frame. The log walls of the narthex, nave and chancel feature saddle-notch corner joints with protruding log ends (from the second to the fifth row of logs). The protruding log ends extend further with each row of logs, forming pronounced brackets with a decorative profile. Above the fifth course of logs, scarf joints are used, reinforced by hidden dowel pins. The log structure is carried on in the octagonal tholobates and octagonal, sphere-shaped domes above the chancel, nave and narthex chapel. A second, faux dome, featuring a ribbed structure with centrings, rises above the main dome of the chancel, made of wooden logs. The pastoforia have slanted wooden log ceilings.

A pronounced skirt roof runs around the entire perimeter of the tserkva (with the exception of the porch), supported by the corbels formed by the protruding wooden log ends; in the centre part of the nave and in the corner sections of the arcades abutting the western part of the narthex, additional support is provided by spindle-shaped columns. The columns in the corners of the arcades formed by the skirt roof running around the narthex are reinforced using braces. Above the skirt roof encircling the narthex there is an overhanging, semi-open arcaded gallery, running along three sides of the chapel located above the narthex; the arcade is made up of columns placed at regular intervals and reinforced by braces positioned in their upper sections. The lower section of the gallery features a tall barrier clad with wood shingles.

A pronounced, profiled cornice crowns the walls the nave. The roofs above the nave and narthex feature elements of both tented and domed roof design, with the octagonal tholobates connecting the two roof forms together rising out of the tented sections of the roof and culminating with spherical domes. The porch features a gabled roof. The nave, narthex and chancel are crowned with three bulbous, eight-faced domes of various size, resting atop octagonal tholobates, with lantern-like steeples perched on top.

The walls of the tserkva (the nave, narthex and chancel) above the skirt roof as well as the roofs and domes are clad with wood shingles. The porch features vertical weatherboarding, with a roof covered with corrugated tin.

Two entrances lead into the tserkva’s interior - one in the southern wall of the nave, the other in the western wall of the porch. The original door openings in the southern wall of the nave as well as the reconstructed door openings in the western wall of the narthex and of the upper chapel feature ogee-shaped lintels. The windows of the church are varied in shape. The nave and the former upper chapel above the narthex have rectangular windows topped with ogee arches; the nave tholobate, the chancel and the chapel above the narthex also feature oculi. All other windows are rectangular and vary in terms of size. The narthex is a two-storey structure; the lower one forming the narthex proper, while the upper one is the former chapel, currently used as a choir gallery. The passage from the narthex to the nave is rectangular in shape, opened towards the nave across the entire width and height of the narthex. Above the narthex there is an aperture connecting the upper chapel (currently used as a choir gallery) and the nave, secured by means of an openwork wooden balustrade running across its lower section. The iconostasis, designed as a divider wall made of wooden logs, separates the nave and the chancel. The chancel expands into shallow, rectangular pastoforia in the south and north. In the porch, two reconstructed wooden spindle-shaped pillars with a pair of reinforcing braces each flank the entrance leading to the narthex.

The interior features original surviving tserkva decorations and fixtures: a wall painting dating back to 1735 on the south wall of the nave, featuring an extensive Judgement Day scene divided into a number of distinct sections; the iconostasis, dating back to the late 17th century and featuring 17th and 18th century icons, as well as an 18th-century holy table. Some of the items from the tserkva are now kept at the Tserkva Art Department of the Łańcut Castle Museum as well as in Lviv.

Compiled by: Ryszard Kwolek, Regional Branch of the National Heritage Board of Poland in Rzeszów, 01.09.2014. 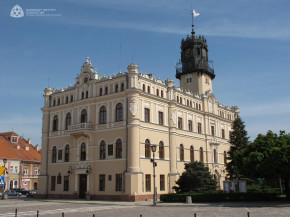 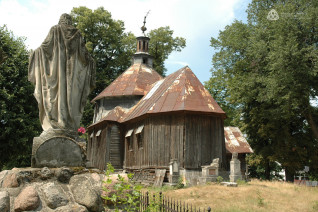 Tserkva of the Protection of Our Ever-Virgin Lady Theotokos 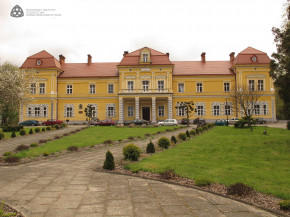 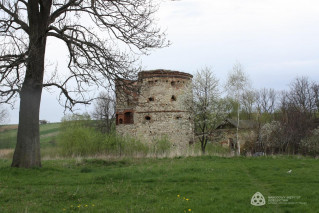 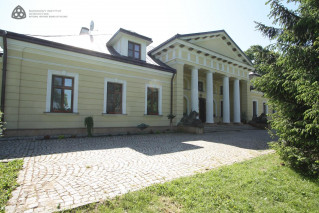 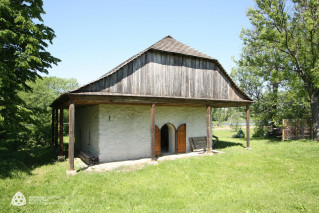 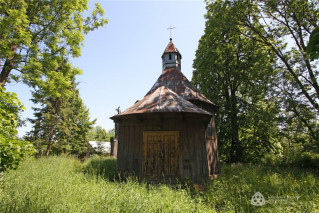 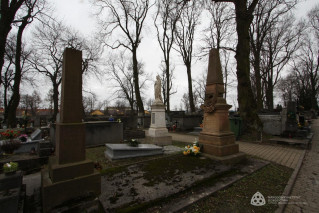