The temple is an example of wooden Greek Catholic tserkva architecture, built undoubtedly on the basis of a dedicated architectural design and incorporating elements of historicism (the so-called Ukrainian national style). The only surviving example of a number of three-domed tserkvas which once existed in the Podkarpackie province.

The tserkva was built in years 1901-1902 to replace an earlier temple, harking back to the 17th century; it was intended to serve as a filial church of the Michniowiec parish. A new iconostasis was built in 1927. In 1939, a brick belfry incorporating a gateway to the church grounds was erected. In 1951, the former residents of the surrounding area were resettled to the Ukrainian Soviet Socialist Republic and replaced with a group of people originating from Chervonohrad. At that time, attempts were made to convert the building so that it could serve as a Catholic church; however, these efforts were opposed by the communist authorities. For the above reason, the tserkva stood abandoned from 1951 onwards, gradually succumbing to decay; some of the fixture and fittings of the church have also been stolen during that period. In 1962, what remained of the original fixtures and fittings was moved to the Museum located in the Łańcut Castle. From 1985 onwards, the church is under the care of the Association for the Protection of Historical Monuments (branch office in Michniowiec). The belfry was renovated in 1993, while a year later the dome above the chancel was also refurbished to prevent further damage.

The tserkva is situated in the centre of the village, in the Bystry stream valley, surrounded by a small number of scattered residential buildings. It occupies an area demarcated using a modern fence made of wooden beams and is orientated towards the east. A free-standing belfry stands south of the church.

The tserkva was built on a Greek cross floor plan; the truncated arms of the cross form the spaces located alongside the nave. The tserkva consists of a chancel, nave and narthex, all of them built on a square plan, as well as rectangular annexe abutting the nave alongside its entire length. Both the chancel and the annexes are three-sided structures. On both sides of the chancel - from the south and from the north - stand small vestries build on a rectangular floor plan which approximates the shape of a square.

The church is a tripartite, three-domed building with a balanced shape, expanding outwards in an accretion of cuboid forms which flow seamlessly into prism-shaped structures surmounted by pyramid-shaped roofs; the dominant feature of the building are its three domes perched on tall, octagonal tholobates, the centre one rising slightly higher than the other ones. The tholobates rise up from saddle roofs broken into five planes descending above the chancel and the annexe as well as into three planes covering the narthex. The roofs above the annexe abutting the nave echo the form of the domes, making the church appear as if it had not three, but five domes. The domes and roofs above the annexes of the nave are surmounted by faux roof lanterns with small onion domes and crosses set atop a globe and crescent. Vertical sections are balanced by the top cornices and a pronounced skirt roof which is carried around the entire church. The skirt roof breaks into a triangular pentice above the door located on the western side, accentuating the main entrance to the church.

The wooden tserkva is based on a log structure positioned atop a low foundation made of split stones joined together using lime mortar. The walls in the lower section of the building have saddle-notch corner joints with short protruding log ends. From the sixth to the ninth row of logs, the log ends become more pronounced, creating a series of near-identical profiled support brackets upon which rest the purlins of the skirt roof encircling the entire tserkva. Above the skirt roof, the walls have dovetail corner joints with no protruding log ends. All roofing made of sheet metal (initially the church roof was partially covered with wood shingles, the remnants of which can be seen on the skirt roof. Above the skirt roof, the walls of the church are covered with vertical board and batten siding. Below the top cornice there is a fretwork arcaded frieze, running around the entire length of the building. Windows in the chancel, nave annexe and in dome tholobates are rectangular in shape, with semicircular arches; the narthex has dual windows. All doors leading into the building are rectangular in shape.

The interior is generally a single space, with the presbytery separated by a non-structural iconostasis wall. Octagonal domes made of hewn logs and perched on pendentives cover the chancel, nave and narthex. The nave, its annexe and the narthex are separated from one another with nothing more than arcades topped with segmental arches. The nave annexe have flat ceilings with a wide crown molding capping the walls, while the ceilings inside the vestries are completely flat. The corner joints inside the nave covered with wooden boards shaped to resemble pilasters. The choir gallery, supported by wooden corbels, boasts a fretwork balustrade made of wooden boards and topped with a simple, unadorned sill and runs alongside the walls of the narthex and the western walls of the nave. The building has lost nearly all of its original fittings.

The building is available all year round and may be visited upon prior telephone appointment.

Compiled by Ryszard Kwolek, Regional Branch of the National Heritage Board of Poland in Rzeszów, 02.07.2014. 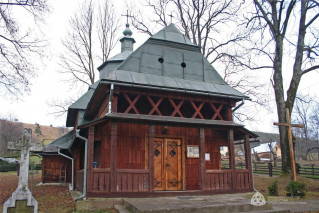 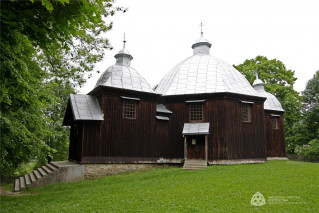 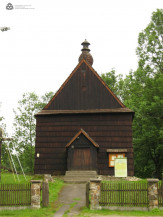 The Greek Catholic filial tserkva of Nativity of the Virgin Mary 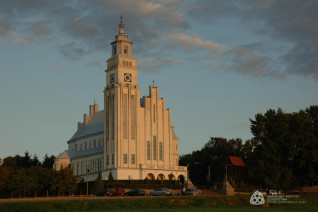 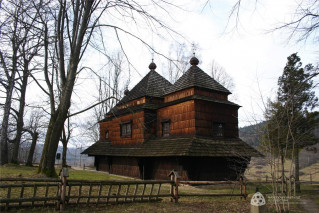 The Greek Catholic parish tserkva of St Michael the Archangel 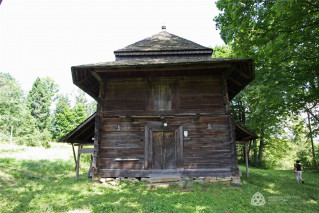 Greek Catholic parish church of the Nativity of the Virgin Mary, currently out of use 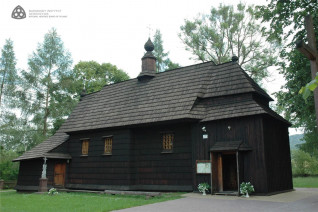 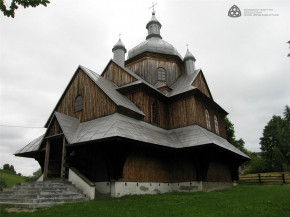