Complex of residential buildings and tenement houses on Cieszkowskiego street

Erected during the period between 1896 and 1903, this complex of houses and tenements, created by various renowned Bydgoszcz-based architects, remains an example of excellent design and craftsmanship of its period while at the same time epitomising all of the stylistic and typological trends represented in the architecture of the city of Bydgoszcz at the turn of the 20th century, from traditionalism to the avant-garde. The overall status and importance of this part of the city have increased substantially since the advent of the annual public event known as the Cieszkowskiego Street Festival.

The formation of what is now known as Augusta Cieszkowskiego street (its previous name - until the year 1920 - being the Helmut von Moltke street) remains inextricably linked to a series of urban development processes stemming from the rapid economic growth which the city has experienced in the mid-19th century. The process of urbanisation was particularly intense in the northern parts of the city, near the former Gdańskie Przedmieście (Gdańsk Suburb) district. It was in this area that the Cieszkowskiego street was first established in 1894, although at that time it was merely a short street running along the east-west axis and connecting the Gdańska and Pomorska streets. The surrounding buildings have been erected in several stages. The earliest of them were constructed as part of the main street redevelopment programme; it was during that period that the existing houses have been replaced with the corner tenement houses at 63 Gdańska street and 48 Pomorska street. During the first stage of development of this area of the city, the urban planners favoured traditional solutions in the form of typical tenement houses consisting of one or two residential wings, designed in the Historicist style. The successive buildings lining the street (no. 4, 8, 11, 14 and 22) were erected in the years 1898-1900. These structures exhibited a greater degree of exuberance in terms of both façade layout and decorations, their eclectic architecture combining historicist influences with Art Nouveau-inspired detailing. During the next phase in the history of the area - years 1900-1903 - the development activity has reached its peak, resulting in the construction of a large number of tenement houses (no. 7, 10, 12, 13/15, 16, 18 and 20). The final additions to the entire ensemble - buildings no. 1, 3, 5 and 9 - were completed in 1904; house no. 22 underwent a comprehensive redesign during the same year, receiving a new verandah and terrace, while one of its corners was now graced by the distinctive free-standing sculpture depicting the halberdier, which went on to become the symbol of the entire street. The new buildings incorporated a great variety of formal solutions and design themes, including a widespread use of Art Nouveau features and detailing, with some modernist influences creeping in as well. The presence of elaborate, asymmetrical architectural compositions, oriel windows, turrets and cupolas as well as decorative timber framing have resulted in an architecture that revelled in its own picturesque nature. A new type of tenement house was also introduced, featuring a compact, T-shaped layout with a small inner courtyard.

Six of the earlier tenement houses, erected before the year 1900, were designed by one of the most renowned local architects, Józef Święcicki, who created the designs for the houses no. 4, 11 and 17 as well as the corner buildings at 48 Pomorska st. and 63 Gdańska st. In his work, he mostly resorted to traditional forms typical of Historicist architecture, incorporating predominantly Baroque, Renaissance and Gothic Revival themes. Karl Bergner, the designer of the five buildings erected between 1900 and 1903, initially favoured an approach which combined Eclecticism with certain Historicist influences, as evidenced by the house no. 14; later on, however, his buildings, while still following the traditional, symmetrical layout consisting of one or two wings, would be graced with façades the design of which showed evident leanings towards Art Nouveau design of the geometric variety (houses no. 7, 9, 16, 18, 20). Another architect, Fritz Weidner, had a penchant for unusual design solutions and seemed to revel in the great diversity of architectural forms and façade decorations that he applied, as evidenced by the house no. 22 (1899) as well as no. 13/15 (1902-1903), the latter having been erected for the Bydgoszcz Housing Association, which was a predecessor to the modern housing cooperative. The Art Nouveau tenement houses at 1 and 3 Cieszkowskiego street, erected in the years 1903-1904, were designed by Paul Bohm, while the design of the building no. 12 (1902-1903) was a collaborative effort of Victor Petrikowski and Rudolf Kern. The reconstructed tenement house no. 5 (1904) was the very first early modernist design to have been created by Ernst Peters, featuring minimal detailing and a strong emphasis on the verticality of the front façade. Today, the façades of all the buildings have been brought back to their former glory through an extensive conservation and restoration programme.

The complex of buildings is positioned along Cieszkowskiego street, in the northern section of the city centre, with the street stretching along the east-west axis between the Pomorska street and the eastern frontage of Gdańska street, one of the city’s main streets. The houses, despite their stylistic diversity, remain similar in terms of size and overall height (two storeys and a converted attic). Most of the houses and tenements were designed on a roughly rectangular or polygonal plan; some of them have a single residential wing (houses no. 1, 7, 14, 17), while others feature a pair of wings (houses no. 2, 3, 9, 11, 13/15 and 16 - 18 - 20). Others still feature a T-shaped plan (no. 8, 10 and 12) or an irregular, polygonal plan (no. 4). House no. 6 features a pronounced avant-corps, while the outlines of houses no. 5 and 22 follow a stepped layout. The façades of some of the buildings are symmetrical and feature the use of subtle avant-corps projecting slightly ahead of the walls (houses no. 1, 5, 6, 7, 8, 11, 12, 17); others, however, follow an asymmetrical layout, with projecting oriels, overhanging balconies, stacked loggias and ornate, flamboyant gables (houses no. 4, 9, 10, 13/15, 14 and 16/18/20). The asymmetrical façades form a stylistically diverse, uneven frontage, with each storey being accentuated with various flourishes such as verandahs positioned within recessed sections of the façades, vertical arrangements of stacked balconies or elaborate roof designs. The corner tenement houses at 48 Pomorska street and 63 Gdańska street feature multi-axial façades with truncated corners, their appearance enlivened by the presence of projecting oriels and mezzanine storeys at the top. All of the front façades feature slanted roofs clad with roof tiles or slate and punctuated with a great variety of wooden or brick dormers as well as tall brick or timber-framed gables representing a seemingly endless array of forms and shapes, be it triangular, half-hipped or adorned with ornamental volutes. Some of the tenement houses also feature various decorative cupolas of both the polygonal, pyramid-shaped and bulbous variety. The interiors of the tenement houses follow a single- or two-bay layout, with the individual suites of rooms positioned alongside narrow corridors and arranged in an enfilade layout, while the utility rooms are usually positioned in the residential side wings accessible through secondary staircases. All entrances to the buildings are positioned in their front façades, with the exception of house no. 22, which has an entrance in its side façade instead.

The façades of individual buildings represent an immense variety of styles, their appearance enriched through the use of architectural articulation, horizontal and vertical divisions in the form of profiled cornices and pilasters or lesenes respectively as well as ornate window surrounds in many different shapes (including rectangular, segment-headed as well as topped with round, basket-handle or pointed arches). The façades are capped by pronounced, lavishly profiled crowning cornices above which rise the slanting surfaces of the roofs, punctuated with dormer windows, wall dormers and turrets topped with cupolas. The style of individual buildings is defined by their sumptuous decorative plasterwork. The façades of the buildings which follow the principles of Eclecticism are adorned predominantly with Historicist decorations and detailing, reminiscent of the decorative practices of the Baroque and Renaissance period, as evidenced by the buildings situated at the corner of the street (48 and 50 Pomorska street, 63 Gdańska street, 17 Cieszkowskiego street). The characteristic features of the first phase of the development of this street include the use of harmonious, symmetrical façades with a rusticated ground floor section and lavishly designed window surrounds, flanked by pilasters and surmounted by window headers resting on decorative corbels. Features such as Gothic Revival influences combined with Art Nouveau detailing are incorporated into the design of the unusual, asymmetrical façade of house no. 4, featuring a projecting front avant-corps and a stacked arrangements of wooden verandahs at the corner; similar detailing is also present in the design of house no. 11, although that building’s overall shape is more symmetrical and conventional in appearance. Classical inspirations are evident in the detailing, façade articulation and plasterwork decorations which grace the walls of tenement houses no. 6 and 8. A combination of traditional, historicist forms and Art Nouveau architectural detailing and decorations define the appearance of buildings no. 1, 3, 7, 8, 9, 10, 12, 16/18/20 and 22, with the most obvious features being the flowing lines of cornices and gables, the presence of ornamental Art Nouveau panels as well as flamboyant window surrounds and portals. Chestnut leaves and other types of foliate ornamentation are a recurring theme which can be seen in many different variations on the façades of various buildings. Other Art Nouveau motifs include geometric ornaments, stylised foliate decorations, scripted initials, cartouches and allegorical figurative scenes in bas-relief. The original, period décor as well as fixtures and fittings of both the staircases (ceramic tiles, wooden stairs and balustrades) as well as the individual apartments (plasterwork decorations, door and window joinery) have survived intact in many of the buildings.

Access to the residential areas is restricted, with the doors being opened from the inside by means of doorbell phones. Shops and service outlets are accessible during their respective opening hours. 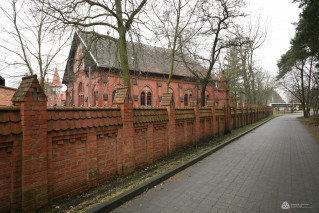 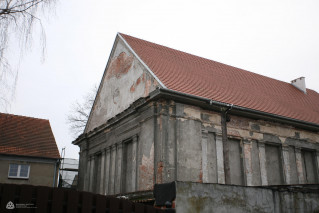 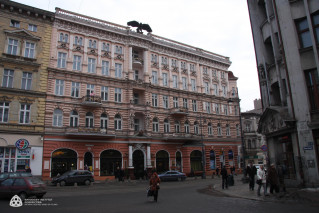 The Under the Eagle Hotel 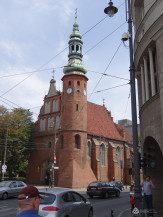 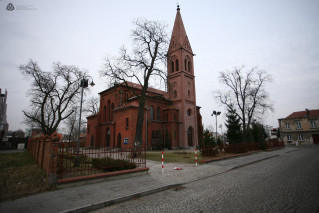 Parish church of St John the Apostle and Evangelist 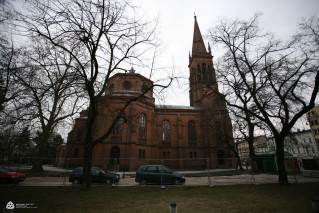 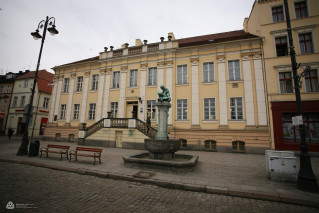 The Royal Western Prussian Deputation of the War and Domains Chamber for the Noteć District in Bydgoszcz, subsequently converted into a Municipal Library, currently serving as the Regional and Municipal Public Library 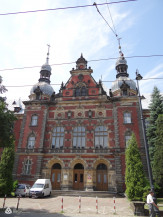