The palace in Bożków, surrounded by a park and garden complex, is one of the few grand residences which survive in the Kłodzko Region. It has an outstanding artistic value both insofar as its architecture and interior décor are concerned.

Once the Thirty Years’ War came to an end, from the 1650s onwards a number of great, expansive estates have been formed in the Kłodzko County, their owners being the members of the aristocratic families who have openly supported the Emperor during the war and who have moved to the region from other areas, including the comital families of von Althann, von Herberstein, von Wallis and von Götzen. Later on, after 1717, the comital family of von Magnis inherited some of the lands which had hitherto been in the hands of the von Götzen family. In 1810, they have managed to expand their presence in the Kłodzko County, becoming the greatest landowners in the whole region in the 19th century. This fact was reflected in the opulence and grandeur of the residential complex in Bożków, consisting of a palace, a decorative garden and park (→ogrodu ozdobnego, parku), an observation tower, a hunting park and a pheasantry. The residence in Bożków has started its life as a Late Renaissance manor house erected in the years 1570-1625 or thereabouts. Designed on a rectangular floor plan, this two-storey mansion featured decorative gables and a pair of tall, parallel gable roofs. The manor house was later redesigned in the Baroque style in 1676, with a tower-shaped corner extension with a bulbous cupola added to its eastern façade. Once the manor was taken over by the comital family of von Magnis, the manor house was redesigned in the years 1787-1792, becoming a grand palace combining the features of both the Late Baroque and Palladian Neoclassicism. The design was most likely created by an architect from Bohemia; one cannot rule out the possibility that it was, in fact, the work of the court architect of the von Magnis family. The older manor house served as a core to which side wings were added on the axis thereof, in a symmetrical arrangement, with parts of their outline following a curvilinear shape. A grand, two-storey hall and a chapel were located in the central section of the building, while a new, main vestibule and staircase were now to be found in the western wing. A few of the more opulent palace interiors, including a grand dining room designed on a circular plan, were located on the first floor of the eastern wing. The interiors were designed in the early Neoclassical style. In years 1870-1877 or thereabouts, the palace was reconstructed and extended after a fire, with the renowned royal architect K. Schmidt from Wrocław being responsible for the design. The task of overseeing the construction works was entrusted to Ewald Berger (dies 1902), the court architect of the Magnis family. As a result, the palace attained a new, informal layout, its silhouette enlivened by a number of towers in different shapes and sizes. The lavish architecture of the remodelled palace followed the principles of the Renaissance Revival style, with numerous references to French architecture. The interiors, on the other hand, showed clear influences of Historicism. In 1903 or 1912, the portico preceding the front façade portal was added, while in the years 1933-1940 the front façade itself was redesigned in the style prevalent in Prussia under Frederick the Great, based on the design produced by the architect Kurt Teuscher from Kłodzko.

The palace is a brick structure with stone detailing, its walls covered with plaster. It was erected on an irregular plan, its front following an arched outline. The central section (which started its life as an early modern manor house) is designed on a square floor plan, adjoined by the newer southern section flanked by a pair of towers at its edges. The eastern wing follows a triangular outline, while the western wing is rectangular in shape, with a slightly offset axis and towers at its corners. The palace is a two-storey structure, its individual sections covered with gable roofs, with the exception of one section which has a tall hip roof instead. The towers are crowned with tall, conical roofs; the roofs of the palace are punctuated with wall dormers and tall chimneys. The façades are adorned with cornices and decorative rustication; the windows are framed with eared or profiled surrounds. The tower projecting from the eastern corner is partially partitioned with pilasters supporting sections of entablature, with faux guerites (bartisans) providing the finishing touch. Inside, the palace features barrel vaults with lunettes, groin vaults, wooden cupola ceilings, cloister vaults with flat centre sections, flat ceilings adorned with crown mouldings, faux beamed ceilings, faux coffered ceilings as well as flat, suspended ceilings. Some of the rooms still retain their sumptuous décor; a good example are the great hall and dining room from the years 1793-1802 or thereabouts, both of them designed in the early Neoclassical style and featuring architectural, figural and ornamental plasterwork decorations. Other notable interiors with period features are the library, the study, the Hunting Hall and the first floor hallway, designed in the Historicist style in the 1870s. The décor of this part of the palace consists of decorative wood panelling and matching wooden doors supplemented by painted supraportes, figural wall paintings as well as hunting scenes in bas-relief. Many interiors still retain the original fireplace surrounds, tiled stoves, ornate staircase balustrades, marquetry doors as well as various examples of wooden door and window joinery from the fourth quarter of the 19th century.

The palace may be viewed from the outside.

compiled by Iwona Rybka-Ceglecka, Regional Branch of the National Heritage Board of Poland in Wrocław, 25-08-2015. 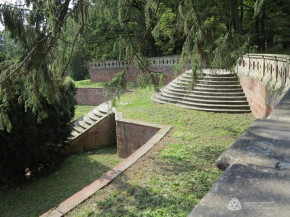 Parish church of St Peter and St Paul and mausoleum 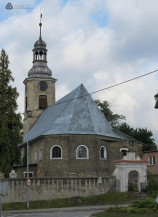 Parish church of the St Margaret Bridge over the Młynówka Canal