or Facebook Login Not registered yet? Register
Cumulus gallery Panorama

Ruins of the castle in Besiekiery belong to the largest and most important defensive structures located in the former Łęczyckie Voivodeship. Defensive advantages of the castle - resulting from the inaccessibility of the site situated among water-logged meadows - were additionally reinforced by the nearby presence of water filling the moat circumscribing the walls of the building. The spatial layout of the Besiekiery castle (a rectangular courtyard surrounded by defensive walls, with a gatehouse in the southern wall and a multi-storey manor erected along the whole length of the northern wall) is reminiscent of typical 15th-century layouts of private castles.

The castle in Besiekiery was founded, as a seat of knights, by Mikołaj (Wawrzyniec?) Sokołowski approx. 1560, in the period when he acted as the voivode of Łęczyca. In 1597, the building owned by the Sokołowski family was taken over by bishop of Warmia, Cardinal Andrzej Batory, and then by Sophia Báthory and Jerzy Rakoczy. At that time, the castle was used for defensive purposes, which is confirmed by archaeological research. It was comprised of a four-storey fortified manor painted red, closing from the north a quadrangular courtyard surrounded with straight walls, and a gatehouse on the axis of the southern wall. The walls of the castle raised straight out of water. In 1655, the structure underwent renovation and conversion founded by staroste Jan Szymon Szczawiński. Information about the conversion was included in two foundation plaques - one embedded in the gatehouse, founded in 1653 by Jan Szymon Szczawińskia, and another one in the front façade of the fortified manor. The conversion of the castle in the 17th century effaced the earlier crudeness of a late-Gothic complex. During the conversion, walls of the building where probably covered with ground, which formed a mound (island), and covered with lime plasterwork; in the corners of the roofs of the fortified manor, “brass bulbs” and two “cupolas” topping the gatehouse were installed. Probably only then the upper, octagonal section of the gatehouse was built (and if it existed earlier - it was pilastered, plastereed, and provided with a Baroque décor). As a result of the conversion, a residential building was created comprised of a plastered fortified manor, courtyard which rows of two-storey arcades (imitating Renaissance courtyards of the palaces of the southern Poland) added to the western and eastern wall, enabling traffic above the courtyard level between the second storey of the grand house and the chapel located in the gate building, and the plastered gatehouse with two utility buildings on its sides on the courtyard. In the grand house, the vaults of the rooms were replaced by wooden ceilings, and window openings were widened. After the conversion, the castle became a residence with arcaded courtyard and numerous residential rooms, located in the centre of an extensive land estate of the Szczawiński family. After this Baroque transformation, major construction works were not carried out on the castle any more. Further descriptions and inventories of the building from the 17th-18the century, tell the story of a progressing abandonment of the structure, which was facilitated by the fire of a part of the castle in 1731, as well as dismantling of the upper storey of the residential manor, which significantly changed the shape of the building. The next owners of the castle were, in the 18th century, the Gajewski family. The building, abandoned in 1800, slowly fell into ruins. In the 19th century, the fortified manor was lowered and covered with a thatched roof. At that time, the castle was used for utility purposes. In 2010, cleaning works at the castle were completed (among other things, the surface of the courtyard was exposed), the moat was revalorised and filled with water.

The ruins of the castle are located within a distance of the village of Besiekiery. On an island, inside of a moat filled with water, there are ruins of a brick castle. The building was erected on a quadrilateral floor plan (approx. 38 m x 40 m), from brick wall on a stone foundation, built with the use of the opus emplectum technique. The wall is clad with brick arranged in the Polish (Gothic) pattern from outside, in the lower sections of the main core filled with brick arranged transversely to the course of the wall, and in the higher sections - with field stones filled with brick and stone debris. The general spatial layout of the castle is quite legible. The building is comprised of three elements: a rectangular courtyard surrounded from the east, west, and south with defensive walls, remains of a rectangular building closing the former one on the whole length from the north, and - on the southern axis of the courtyard wall - remains of the gate passageway and tower. The walls are 2 m thick, but their height is difficult to determine as their top section is not preserved in any place, and there is no evidence confirming their original height. In the western curtain wall, openings have been preserved - one of them probably constitutes remains of a passageway, and the other one was done as a result of damages. The eastern curtain wall of the castle, with more extensive damages, broken in many places, is lower than the other ones. The southern curtain wall is best preserved, but also not to the full height. On both sides of the gate openings from the courtyard, a row of square openings visible at the same level from both sides, has remained - undoubtedly left by the ceiling beams of the former utility buildings. Out of the gatehouse and passageway, a fragment of the western wall has survived until today, which reveals that the building was once a four-storey structure: it was comprised of two lower stories on a square plan, and two upper ones - on an octagonal plan. The internal walls of the quadrangle lower part are plain, with two window openings in the upper storey. The octagon resting on it is pilastered on the edges and topped with a distinctly profiled cornice, with windows on two storeys: rectangular in the lower one, and round over them. From the eastern wall, relics of the ground floor has been preserved within the wall core. A similar state of conservation characterises the northern wall, in which, however, a ruined and enlarged opening where the gate pass-through once was is visible (the gate was probably 2.4 m high and up to 3 m wide), with cladding preserved directly above the ground. The southern wall is also missing. It is possible to determine the levels of internal storeys thanks to visible horizontal partitions. On the ground floor through which the gate passageway goes, on the western wall and in its meeting point with the northern wall, a trace (volute) of a barrel vault has survived. On the second storey of this wall, traces of a barrel vault with lunettes are visible, and over them - brackets used to mount floor joists. In the octagonal section, between the second and the fourth floor, ceiling beam wall spaces have survived. In architectural terms, the walls of the tower are similar to the castle walls: in the ground floor they are made entirely of brick, in the next upper section - with a core with layered field stone and lime and sand mortar, while in the octagonal section - only of brick. The whole, both from outside as well as inside, is clad with brick arranged in the Polish (Gothic) pattern. The wall face was preserved, with some its fragments missing, in the western wall. On the relics of the other walls, no cladding is visible. In the fortified manor, built along the northern wall of the courtyard, fragments of internal partitions - four rooms of the ground floor - have survived. In the eastern, northern, and western parts, the walls are present in the form of relics up to the height of the second storey. The best preserved parts are in both external corners, which at the same time are external corners of the whole complex.

Currently, the castle walls are surrounded by the castle island with a margin outside the walls of approx. 10 m. The island is flat, with small slopes descending to the moat. The moat is constituted by a pond located near a watercourse, with an outline similar to an oval in shape. The castle is located in the south-eastern part of the island. The ruins can be accessed by a new bridge, leading to the passageway of the gate house.

compiled by Jolanta Welc-Jędrzejewska, Regional Branch of the National Heritage Board of Poland in Łódź, 18-07-2014. 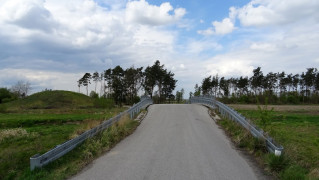 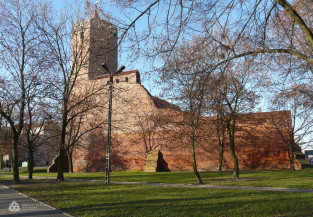 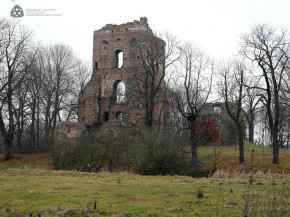 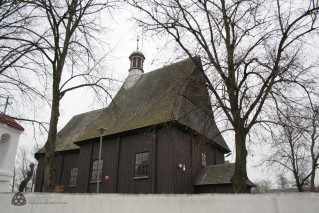 Catholic Church of the Assumption of the Blessed Virgin Mary 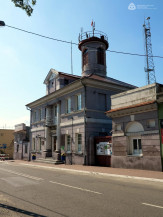 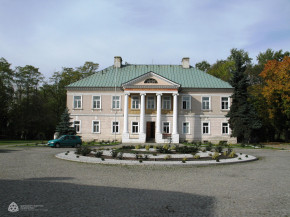 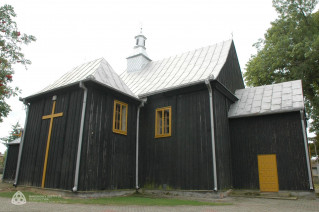