The palace and garden complex in Nieborów and the nearby sentimental and romantic garden in Arkadia are connected within a single project in the historical and artistic aspect as well as on the ownership and functional side. These monuments belong to the elite group, in the scale of the entire country, of authentic examples of an aristocratic residence that manifest outstanding representative, economic and industrial solutions. They have a unique significance for national culture, primarily due to the state of preservation and their links with prominent historical figures.

The Nieborów and Arkadia complex is characterized by high artistic value manifested both in the form of residential architecture and in the accomplishments of garden art.

The seventeenth century body of the Baroque palace in Nieborów with its authentic layout and interior furnishings, surviving art collections, a library and archives, is one of the best preserved residences of the Polish aristocracy. The palace was designed by the royal architect - Tylman of Gameren in the style drawing from the traditional solutions of Polish defensive manors (corner towers).

The palace and garden complex has a clear spatial layout with preserved characteristic elements of the organised and landscape garden structure, as well as quite original plant arrangements and water system. It is a composition of a classic formal garden, with a pattern typical of the solutions of the French school of the seventeenth century, having also features relating it to a group of Dutch and German theoreticians of the first half of the seventeenth century. Its subsequent expansion including the peripheral parts, with the participation of Szymon Bogumił Zug (designer of classicistic buildings and structures), consistently preserved the original assumptions, enabling the completion of the earlier design in accordance with the spirit of the changing epochs.

Garden in Arkadia was founded in 1778. It was initiated by Princess Helena Radziwiłł née Przeździecka and it belongs to the first in Poland compositions formed under the influence of the Anglo-Chinese school, which was originally of a sentimental character, later enriched with a romantic touch. Apart from the now-defunct Powązki of Princess Izabela Czartoryska née Fleming and Mokotów of Princess Izabela Lubomirska, Arkadia is the best-known creation of this type in Poland and at the same time one of the few sentimental and romantic gardens in Europe that survived almost unchanged. Extremely sophisticated, individual intellectual concept of the garden, created by Princess Radziwiłł, along with buildings referring to the tradition of the Roman Empire and the collection of ‘antiquities’, put this object at the level of similar European solutions.

The garden has survived within its original boundaries. The composition developed from the end of the eighteenth century till the nineteenth century constitutes an original interpretation of the views of the epoch and was only slightly changed by Helena’s successors.

Both in the case of Nieborów and Arkadia, particularly noteworthy is how respectfully the successive owners approached the achievements of their predecessors and the measures undertaken to preserve and develop the concept of the residence, thanks to which the original historic substance of the venue has been preserved. And what is particularly rare, the palace interior decoration and the tradition of manufacturing local ceramic products (Majolica Workshop) have also survived.

The beginnings of the palace and garden complex in Nieborów date back to an earlier court-farm settlement documented at the end of the sixteenth century as the seat of the knightly Nieborowski family with the Prawda (Truth) coat of arms. Around 1690, the estate was purchased by Cardinal Michał Stefan Radziejowski. He expanded the former mansion, transforming it into a Baroque palace designed by Tylman of Gameren. Probably, parallel to the palace a regular garden was marked out on its southern side. In the years 1697-1765, the owners of Nieborów were the Towiański and Lubomirski families, and then the castellan of Dobrzyn, Stanisław Łochocki. Significant changes of the residence occurred in the years 1765-1774, when Nieborów belonged to the prince Michał Kazimierz Ogiński. In the years 1774-1831, the Nieborów estate became the property of Michał Hieronim Radziwiłł, the Great Sword Bearer of the Grand Duchy of Lithuania and his wife, Helena née Przeździecka.

In 1780, the estate was enlarged by the village of Łupia (later Arkadia), in which in the duchess together with Szymon Bogumił Zug began the creation of a new garden already in 1778. Their concept, being a response to new ideas in the garden art, was carried out successively until the death of the founder in 1821. During that time it underwent a gradual transformation from a composition maintained in the sentimental to romantic style, where the designer of the structure was Henryk Ittar.

After the death of Michał Hieronim Radziwiłł, the Nieborowska residence fell into neglect. In Arkadia some of the buildings dilapidated, some of the sculptural embellishments were sold. In 1870, the garden with the pavilions was sold.

In 1879, the estate was reintegrated by Michał Piotr Radziwiłł. He began renovating the palace and rearranged some parts of the garden. As from 1893, the garden in Arcadia also returned to the family. Rescue works along with the reconstruction and restoration of damaged buildings were carried out. More valuable sculptures and architectural elements were moved to Nieborów. From 1945, the palace and garden complex in Nieborów and the romantic garden in Arkadia remain the property of the State Treasury, in perpetual use of the National Museum in Warsaw.

The palace and garden complex in Nieborów is located next to the district road Bolimów-Nieborów separating it from the village. The complex occupying an area in the form of a rectangle is located along the north-south axis connecting the church and the palace. It is a baroque spatial composition, expanded in the eighteenth century, acquiring the final shape in the nineteenth century. Its central element is a baroque palace erected on a rectangular plan with two square alcoves, two-storey, with a gambrel roof. The four-storey alcoves are covered with cupolas. The façade is highlighted by an avant-corps on the central axis topped with a triangular pediment filled with a bas-relief. The palace is preceded by the honorary courtyard (cour d'honneur) and outer courtyard (avant-cour) performing the function of the driveway since the 1880s, and the representative main gate with a guardhouse. The rectangular courtyard is partially surrounded by buildings: on the west side - the majolica workshop from the third quarter of the eighteenth century and the former palace outbuilding from the first half of the eighteenth century; on the eastern side - post-war storehouse of works of art and a former palace cellar. The southern, eastern and western part of the residence is occupied by gardens, consisting of several intertwined parts, shaped at different times.

Centrally, along the main axis of the composition underlined with a lime alley, there is the oldest part originating from around the seventeenth century. It is arranged in a three-level division of space typical for classical gardens: ground levels, cabinets and high-growing bosquets, surrounded by greenery tunnels with circular arbours at the southern corners. This inner section is surrounded on three sides by a garden founded in the second half of eighteenth century, which is a conceptual development of the earlier one. The southern border of the regular garden is marked ‘aha’, while the garden composition goes into the open landscape of the so-called Nieborów Fields. The regular garden is complemented by a landscape park located in the western part, founded in the nineteenth century in the place of an earlier zoo.

On the northern side of the road to Bolimów, on the area of the former farm, there is a classicist granary building from the end of the eighteenth century.

The nearby garden in Arkadia occupies an area of an elongated, irregular shape, located between the Łowicz-Nieborów road and the Skierniewka River. It is an early-pictorial free composition, the essence of which are personal, inscribed in the Arcadian myth, ideas of the author, Princess Helena Radziwiłł née Przeździecka. The base of the spatial composition of the garden is the water system, whose main element is the Big Pond with the Island of the Victims. The most important structures built at various stages of the development of the garden are located around its north-eastern extremity. The remains of the sentimental period are: classic in form Diana Temple, which is the central structure of the composition, Greek Arch, primarily serving as the view frame of the Temple seen from the eastern side; High Priest's shrine in the form of an artificial ruin contrasting with the body of the Temple; Sybil's Cave, constructed of natural boulders, situated on a hill; above it, a Gothic House with an open gallery with pointed arches; House of Murgrabi, and an aqueduct with a cascade. In the southern part of the garden there are the remains of the old Circus - two semi-circular ‘finishing lines’, the central obelisk and a reconstructed Tomb on the Poplars Island, now on the bank of the Skierniewka River. At the south-eastern corner of the garden, there are so-called Ittar’s Poles, indicating the entrance to the garden created after the Circus was built. Numerous architectural and sculptural elements have been preserved in the garden.

pdf Decree issued by the President of Poland that bestows on the palace, garden complex and a sentimental and romantic garden at Nieborów the prestigious title – the Monument of History / 5721kB

Church of the Holy Spirit, St Catherine and St Matthew 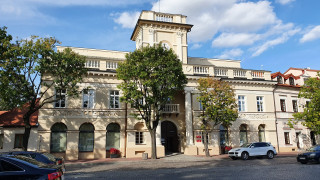 Łowicz - Cathedral Basilica of the Assumption of the Blessed Virgin Mary 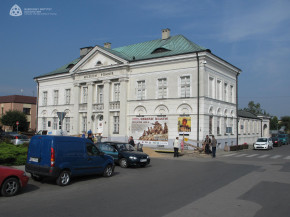 Cemetery of St Roch, currently cemetery of the church of St Stanislaus 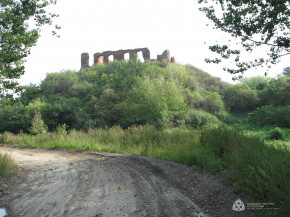