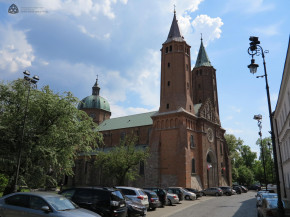 The Assumption of the Most Blessed Virgin Mary Cathedral Basilica
Płock

The basilica presents historical and artistic values. It is one of the oldest Polish sacred buildings. The feature underwent numerous alterations and now it presents elements of three architectural styles: Romanesque (arrangement of the apse, trimmed stone used as a construction material), Gothic (towers, buttresses, gables) and Renaissance (cupola ceiling with a lantern). The temple is a place where two Polish kings were buried: Władysław I Herman and his son Bolesław III Wrymouth as well as fifteen Dukes of Mazovia.

The first wooden church was erected in Płock soon after the establishment of a diocese in 1075. Fully wooden, it stood only for half a century. In 1136, the Bishop of Płock, Aleksander of Malonne, began the construction of a stone temple, which was consecrated in 1144. It was then the famous two-wing door of the Płock type was manufactured in Magdeburg. However, in unclear circumstances, they found their way to the St Sophia Cathedral in Nizhny Novogrod (Russia) two centuries later.

In the 13th century the cathedral suffered multiple fires and ravages, therefore it required renovation. Gothic towers were built at the turn of the 13th and 14th century. Only from the mid-16th century did the building enjoy its blooming age again. In this period, the temple was demolished to foundations and re-erected in the Renaissance style. Under the guidance of Giovanni Cini of Siena and John Baptist of Venice, an octagonal cupola with a lantern was erected, the chancel was extended and two rooms with two floors for sacristy, treasury and chapter house were annexed to the chancel on both sides. In 1787, as a result of alteration carried out by Domenico Merlini, the front façade obtained a Classicist look.

In the first years of the 20th century, during the general renovation guided by Stefan Szyller, the Renaissance character of the temple was restored. It was then, among others, a new, brick choir gallery was built and the interior was enriched by a Renaissance Revival wall painting by Władysław Drapiewski. During World War II the Nazis bombed the St Sigismund chapel and damaged the side nave vault; later on, they arranged the space to serve as a furniture warehouse. After a necessary renovation, in 1966 the cathedral became a place where the Millennium of the Baptism of Poland was celebrated.

The cathedral is a three-nave building with a transept and chancel terminating in a semi-circle, with four side chapels: royal, the Holy Family (the Sierpski family), the Most Blessed Sacrament and St Sigismund.

The facade was adorned with, among others, four coats of arms of bishops in the gable - initiators of reconstruction of the cathedral, and a bronze relief presenting the offering of the temple to the Holy Mother of Mazovia (1902).

The cathedral’s interior was designed in the early 20th century by Stefan Szyller. It includes, among others: a Renaissance Revival altar, choir stalls and the bishop’s throne in the chancel as well as a pulpit and organ. Painted decorations were created by Władysław Drapiewski and Czesław Idźkiewicz. The naves include scenes from the New Testament, a panorama of Płock and portraits of persons who rendered meritorious service for the city. The chancel includes portraits of the Holy Mother, 28 saints and blessed and a scene “Finding Christ in the Temple”, which also presents ideologues of the Positivist era related to Mazovia.

The underground part, adjacent to the northern nave of the Royal Chapel, includes tombstones of the kings of Poland: Władysław I Herman and his son Bolesław III Wrymouth, as well as Dukes of Mazovia and Płock, buried here between the 12th and the 15th century. The central point of the chapel includes a Classicist sarcophagus of black marble, lavishly decorated with national emblems, designed by Zygmunt Vogel.

A copy of the Romanesque two-wing door, the so-called Płock door, manufactured in 1981, is located between the porch and the main nave. It comprises 48 gunmetal plaques with reliefs presenting scenes from the Old and New Testament, allegories and images of the founder (bishop Aleksander of Malonne) and the builders. The original Płock door is approx. 20-30 years older than the Gniezno door.

The northern nave includes altars of St Stanisław Szczepanowski, the Heart of Jesus and the Holy Mother of Mazovia. The southern nave includes altars of the Crucified Jesus, St Stanisław Kostka and St Teresa of the Child Jesus. Due to their lavish decorations, the gravestones of, among others, Bishop Jan Cielecki (17th century), Voivode of Płock Stanisław Krasiński (17th century) and a monument of the Bishop of Płock Piotr Dunin-Wolski (late 16th century) deserve attention.

The feature is open to the public.

Compiled by Bartłomiej Modrzewski, Regional Branch of the National Heritage Board of Poland in Warsaw, 7-10-2014. 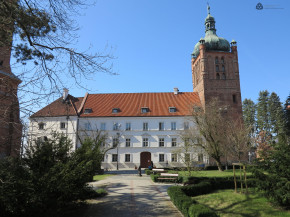 A complex of buildings forming the Benedictine abbey and the castle of Dukes of Mazovia represents a valuable historical source when learning about the beginnings of the Polish state. What deserves particular attention is probably the oldest castle wall made of stone blocks in Poland, dating back to the 11th century, remains of the Romanesque sacred architecture and examples of secular Gothic architecture.

Already in the 10th century the first settlement existed on the Tumskie Hill and in the second part of that century a wooden defensive stronghold was established there. The oldest relics include the remains of the early medieval pagan sacrificial altar (10th-11th century) and a three-concha castle chapel of Saint Adalbert (an outline on the castle yard). After 1034 the chapel was expanded for Benedictines who were brought to Płock. Historians are considering several different hypotheses concerning the monastery’s functions, however, this issue has not been resolved yet. All we know is that the friars built another rotund-shaped chapel of Saint Lawrence.

From the 14th century onwards a brick defensive castle, erected as a result of the massive construction rush during the rule of Casimir the Great, was located here. The remnants of the castle of Dukes of Mazovia include two towers that have survived to our times: Noble (Tall) and Clock Towers as well as fragments of castle walls. The Clock Tower was erected around 1360 during the construction of the castle. From the late 18th century it has functioned as a cathedral bell tower. The Noble Tower was significantly lowered in 1796, since it posed the risk of collapse. It served as a prison for the nobility - thus its name.

In the 16th century a part of the castle collapsed due to the landslide of the buttress to the Vistula river. After the reconstruction, the castle was divided between the secular and ecclesiastical jurisdiction. The residence of dukes was relocated to a smaller, southern part of the complex, while the rest of the building became property of the Benedictines in 1538.

In the early 17th century the abbot Stanisław Starczewski carried out a thorough renovation of the church and monastery buildings. The St Adalbert church obtained a lavish, early Baroque decor with a monumental marble altar and a portal, designed by the royal architect Mateo Castello. During the Deluge and the Northern War the complex was completely looted and the buildings damaged.

In 1781 the Benedictines abandoned Płock and relocated themselves to Pułtusk. After the partition of Poland, a large part of the castle was demolished and its remains were taken over by a seminary. The church was liquidated in 1856. In 1866 the building was taken over by the Russian authorities, who established a gymnasium for girls that functioned until 1914. In the inter-war period, the building housed a school for organists and private apartments.

In the 1960s, after the adaptation of buildings, the Museum of Mazovia was located here. It opened to the public in 1973. In 2005 the Museum was relocated to a tenement house at Tumska Street. After another renovation in the years 2006-2008, the Diocesan Museum obtained display space in the building of our interest.

The complex of historic buildings includes remains of a rotund positioned to the south of the building, wings of the monastery with relics of the St Adalbert church and defensive walls of the castle, the Clock Tower and the fortified tower (the Noble Tower). Four wings supported by buttresses were erected on a trapeze floor plan. The building is obscured by a tall curtain wall in the west and the north.

In the south-western corner there is a bulky fortified tower - the Noble Tower, also called the High Tower. The lower storey is quadrangular, the upper is octagonal, covered with a multi-hipped roof.

Opposite, there is a quadrangular Clock Tower, lavishly ornamented in the upper part, crowned with corner pinnacles and an onion-like cupola with a lantern. In the north it is broadened by an avant-corps, distinctive for its clock and a lacy Gothic attic.

Currently, the former Benedictine abbey building houses a treasury of the Diocesan Museum, where numerous artefacts of the sacred art have been collected, among others, a herma of St Sigismund, patron of Płock, and a famous cup with a paten, founded by Konrad of Mazovia.

Compiled by Bartłomiej Modrzewski, Regional Branch of the National Heritage Board of Poland in Warsaw, 14-10-2014 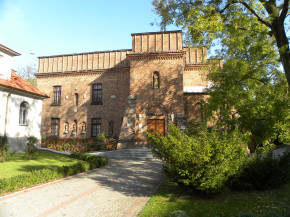