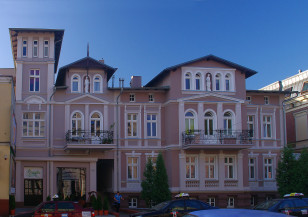 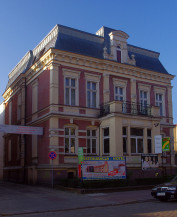 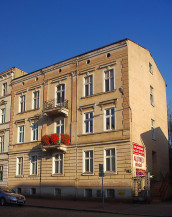 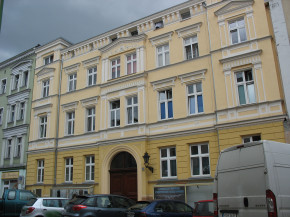 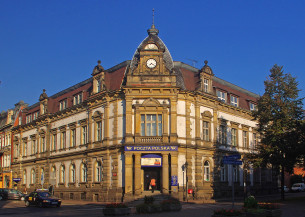 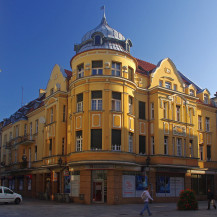 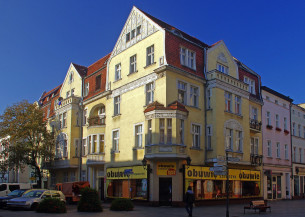 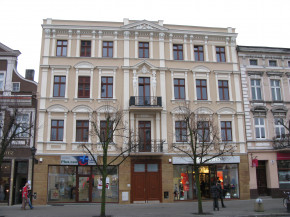 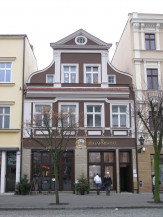 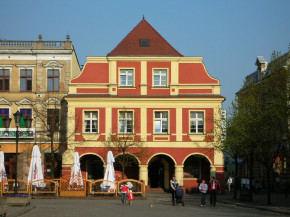 In its current form, incorporating elements of both the Baroque and the Classicist styles, the Leszno town hall is commonly considered to be one of the most spectacular buildings of this type anywhere in Poland. The building incorporates remnants of the original town hall which was erected here back in 1639. Since those times, the town hall has been redesigned on numerous occasions. Notable architects responsible for its subsequent redesigns include Marcin Woida, Jerzy Cantenazzi, Pompeo Ferrari and probably also Dominik Merlini. The latter is better known for the design of the Łazienki royal park in Warsaw and for his work as the royal architect of the king Stanisław August Poniatowski. The town of Leszno had powerful links to the House of Leszczyński, a family of magnates one of whom - Stanisław Leszczyński - has even managed to rise to kingship.

Leszno was a private town which remained in the hands of the Leszczyński noble family (of the Wieniawa coat of arms) between 1394 and 1738; later on, in years 1738-1833, the town passed on to the Sułkowski family, who also owned the nearby town of Rydzyna. In 1516, a group of refugees from Bohemia, Moravia and Silesia have settled near the village of Leszczynko, fleeing religious persecution. In 1547, Rafał Leszczyński, the castellan of Przemęt, has managed to convince king Sigismund the Old to confer Magdeburg rights upon the town. In 1604, the first members of the Jewish community arrived in Leszno. During the 18th century and the early 19th century, their religious community was the largest in all of Greater Poland, surpassing even the one in Poznań. After 1633, more Protestant refugees from Silesia - most of them of German descent - arrived in town. In the 16th and 17th century, Leszno remained the centre of the Unity of the Bohemian Brethren. In years 1628-55, the eminent scholar Jan Amos Komeński as well as Jan Jonston both resided in the town of Leszno. Later on, however, the devastation which followed in the wake of the Swedish Deluge brought an end to the town’s period of prosperity. As the war started, the predominantly Protestant town opened its gates to the Swedish invaders; this did not, however, save it from destruction, for a mere year later, in 1656, the town was set on fire by the Polish forces. It was only after 1738 that the town - having been acquired by the Sułkowski noble family - was able to flourish once again. Following the Partitions of Poland and the Treaty of Versailles, the town was reincorporated into Poland in 1920.

The town features a diverse cultural background, having, at various times, been home to both the Bohemian Brethren from Bohemia and Moravia, Silesian Lutherans, Catholics, Jews, Scots, Italians and Poles, which led to the formation of a great variety of local religious communities. The coexistence of all these communities - which, at first glance, might appear to have opposing interests - was made possible due to the efforts of the Leszczyński and Sułkowski noble families, who have, over the years, proved to be truly enlightened, well-educated, tolerant and prudent. The most eminent of them was the king Stanisław Leszczyński, the son of Rafał Leszczyński and Anna Leszczyńska née Jabłonowska. Stanisław Leszczyński remains a truly fascinating person - a well-educated and broad-minded man who nevertheless found himself in a great predicament due to the unfortunate historical circumstances. He became the Polish king on two occasions, namely in years 1705-1709 and 1733-1736. His supporters, however, have ultimately proved unable to defeat the Saxon opposition. In the end, the king was forced to go into exile. On many occasions, he had to travel around Europe disguised as a merchant or even as a peasant, which led to some referring to him as “the king in disguise”. He died in exile as the duke of Lorraine. His daughter, Maria, became the queen of France, leading him to become the father-in-law of the French king Louis XV.

When we take the wealth and ambitions of the House of Leszczyński, it is no wonder that the town needed an impressive building for the local magistrates.

In 1656, the town hall - much like most other buildings in town - was lost to the blaze.

The town hall - including the tower - was rebuilt in 1660, with Marcin Woida, an architect from Leszno, taking charge of the reconstruction efforts.

In 1707, the town hall was destroyed once again during the Great Northern War.

In years 1707-1708, the town hall was reconstructed in its current form incorporating elements of both the Baroque and Classicist styles, its design being the work of Pompeo Ferrari and Jerzy Cantenazzi.

In 1786, the tower and the roof had to be reconstructed following a devastating fire which broke out in 1767.

In 1790, the building was damaged by fire once again, leading to reconstruction efforts which took place in years 1804-1817.

The ground floor level underwent a partial redesign in 1906.

A comprehensive restoration was carried out in 1926.

It was later also restored in 1950 and 1973; during that time, the town hall served as the seat of the Municipal National Council.

The most recent series of restoration works were carried out in years 1993-2000, when the interiors were also modified; the architects responsible for the redesign were Jerzy Gurawski and Robert Gzyl.

Leszno is a town with district rights, situated at the northern edge of the Leszczyńska Upland. A number of roads and railways from Poznań to Wrocław and from Kalisz to Zielona Góra lead through the town.

The town’s centre is the quadrangular market square with the town hall in the middle and with two perpendicular streets leading away from each corner, forming what is known as the chessboard layout. The distinctive deformation of the otherwise regular market square is believed to be linked to the adaptation of the local route leading from Rydzyna to Kościan, which must have influenced the layout of the town even back when it was still a village, years before it was granted municipal rights. This is clearly apparent when one looks at the western frontage of the market square as well as the shape of Narutowicza street (formerly known as Kościańska street). The road from Rydzyna led to the market square through the Leszczyńskich street (formerly known as the Rydzyńska street or Wrocławska street). The road with the Poznań-Głogów route, which was of great importance to the town, led through Słowiańska street (formerly known as Święciechowska street). The route towards Osieczna - Niepodległości street, formerly known as Osiecka street - was considered to be less important insofar as trade and business activities were concerned.

The town hall’s front façade faces the east; the building is made of brick, its façades covered with plaster. Designed on a rectangular floor plan, the town hall features a square tower projecting slightly from the front façade to form a narrow avant-corps. The imposing tower dominates the compact, three-storey structure. The longer of the building’s façades follow a seven-axis design, partitioned at the first- and second-floor levels by lesenes designed in the giant order. The side façades follow a three-axis design and feature divisions arranged in a frame-like pattern. The corners of the building feature pairs of columns in the composite order, with similar columns also flanking the entrance in the western façade. The façades above the ground floor level are adorned with lesenes. The town hall is crowned with an entablature and a parapet with a balustrade. The body of the building is covered with a gable roof with slopes so negligible as to make it almost flat. The windows at all levels are rectangular in shape. The first- and second-floor windows are adorned with profiled window surrounds with keystones, with decorative panels positioned underneath each window. A tower, build on a quadrangular floor plan, rises above the compact corps de logis of the building, its three levels all framed by Corinthian pilasters at the corners and topped with entablatures. The fourth level of the tower, octagonal in shape, is narrower than the other sections and is topped with a slender tin cupola with an arcaded openwork section. A portal topped with a semicircular arch is positioned on the axis of the building’s façade; framed with pilasters and crowned with a triangular pediment, the portal is preceded by a flight of steps with an iron balustrade. A stone, 18th-century cartouche in the Baroque style is incorporated into the space above the portal, featuring a personification of Justice, the coat of arms of the town of Leszno and the Wieniawa coat of arms of the Leszczyński family, framed by acanthus leaves, a grotesque mask and a clamshell ornament.

The interior follows a two-bay design with the vestibule positioned on the axis of the building. The original interior layout has been partially modified over the years. Some of the ground floor rooms feature barrel vaults with lunettes. The lavishly designed office of the Mayor as well as the great auditorium used for the purposes of official gatherings and concerts are located on the piano nobile level. The first-floor rooms include, inter alia, the wedding hall. An exhibition hall of the Municipal Office for Art Exhibitions is located on the second floor. It is there that visitors may also admire the historical wall plaques from the period between the 17th and the 20th centuries, which had once adorned the town hall façades but were later taken down during the most recent restoration in the 1990s . A café is located at the ground floor level.

The site is accessible to visitors. Interior tours available upon prior appointment.

compiled by Teresa Palacz, Regional Branch of the National Heritage Board of Poland in Poznan, 29-10-2014.