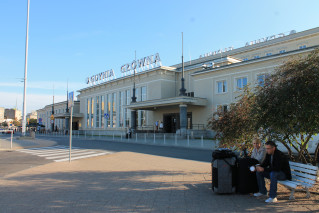 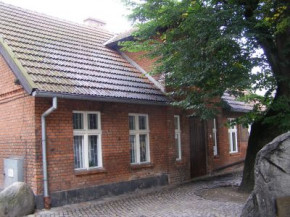 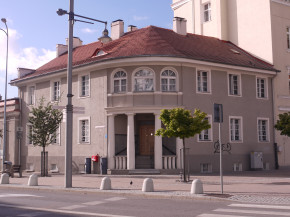 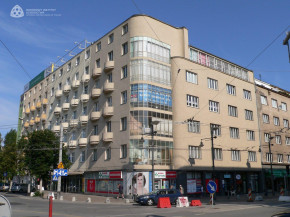 It is an outstanding building designed in the functionalist style with evident influences of Dutch expressionism. The building is of enormous supra-regional value.

It was built between 1936 and 1937 for lawyer Antoni Ogończyk-Bloch and architect Leon Mazalon who also was the co-author of the design (together with Stefan Koziński). The authors were inspired by the expressionist buildings by Amsterdam school representatives.

The luxurious corner tenement is located in the centre of Gdynia, in Świętojańska Street (eastern façade), at the intersection with Piłsudskiego Street (southern façade). The building was erected on an L-shaped floor plan; the part facing Świętojańska Street has shorter five-storey wing having a rectangular outline, whereas the part overlooking Piłsudskiego Street is a larger six-storey wing with a gateway on the ground floor level. The fifth floor of the wing facing Świętojańska Street was built further back from the rest to create space for a spacious terrace. Each wing has its own staircase and lift. A rounded and glazed corner part used for the so called winter gardens created on all storeys gives the tenement house more modernity and prestige. The façades were painted in light cream, which reflected light. The texture of the plaster was characterised by a strong pattern. The distinctive shape of the building emphasized by a stylistic S-shaped wave of the glazed corner, which smoothly flows into the eastern façade, and the wide southern façade with characteristic rows of "waving" balconies is full of movement and chiaroscuro. The ground floor is a commercial space and was deliberately glazed so as to expose the post-and-beam structure. The building had a gas and central heating system. In addition, it was the first building in Gdynia to have an anti-aircraft and gas cover (O.P.L.G).

The structure can be viewed from the outside. The commercial ground floor is open to the public.

compiled by Dorota Hryszkiewicz-Kahlau, Regional Branch of the National Heritage Board of Poland in Gdańsk, 14-11-2014. 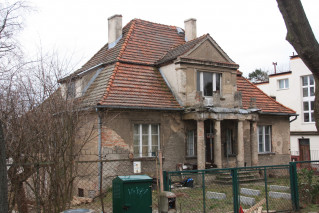 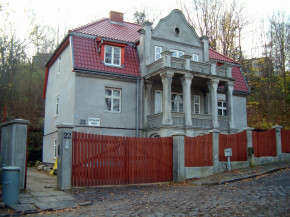 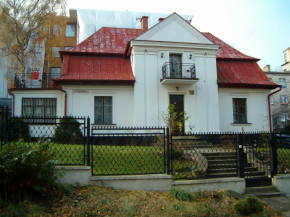 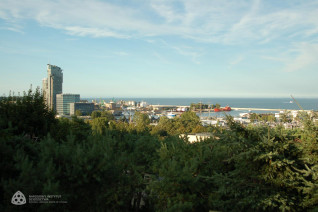 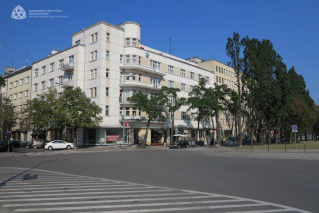 It is the most prominent building of the 1920s in Gdynia. In terms of visual arts, the structure represents early functionalism. It was the first building to employ formal analogies to shipbuilding.

The tenement house was owned by engineer Stanisław Pręczkowski from Wejherowo. It was designed in 1928 and built in stages. The design was created by Tadeusz Jędrzejewski working for the architectural design studio “Biuro architektoniczne Włodzimierz Prochaska, Stanisław Garliński, Tadeusz Jędrzejewski. Inżynierowie architekci”. In 1930-1931, the construction work was carried out under the supervision of Bernard Dulny. During that period, the corner part of the building and a fragment overlooking the Kościuszko Square were erected. Between 1934 and 1935, a wing was added facing Kościuszko Square; the extension did not include a side outbuilding. The last stage of the construction work took place in 1936-1937. The stage involved the construction of a wing facing Żeromskiego Street and “Polonia” cinema.

The building is located in the city centre, in the northern frontage of Kościuszko Square, at the intersection with Żeromskiego Street. The corner building is built on an L-shaped plan; its longer side extends along Kościuszko Square. The building and the cinema overlooking the yard have a rectangular floor plan with a diagonal eastern side. The imposing tenement house is located among typical urban frontage buildings. It has five floors at the corner and lower side wings. The layout is symmetrical; streamlined forms are combined with expressive shapes of the bodies; structural decorative components of the plastered façade were exposed. The pioneering juxtaposition of individual segments of the building clearly raises associations with a ship: the corner of the tenement which is higher by one storey was juxtaposed with the cylindrical form reminiscent of a captain’s bridge, which was additionally highlighted by metal balustrades of the balconies and a darker colour of the plaster. The ground floor was adapted for trade and services. The “Polonia” cinema overlooking the yard was added later (after the war — “Goplana” cinema). The building contains three staircases. It features a two-bay layout and is divided into small flats allowing the possibility of jointing the central flats into one large flat. The building has central heating. The preserved original furnishings include window and door joinery, interesting steel openwork balustrades of the balconies, and interior stair railings.

The structure can be viewed from the outside. The commercial part of the ground floor is open to visitors.

compiled by Dorota Hryszkiewicz-Kahlau, Regional Branch of the National Heritage Board of Poland in Gdańsk, 08-11-2014. 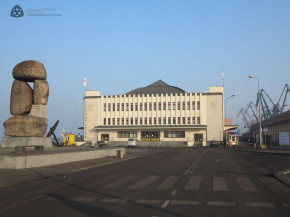 The Passenger Terminal is a valuable example of a modernist public building. It represents a harmonious combination of the representative and storage function. The structure is subtly decorated. The modern passenger terminal in the Polish port of Gdynia is of great historical value. Now, it is a symbol and houses the Emigration Museum.

The Passenger Terminal was designed by the Katowice branch of a company based in Berlin, Dyckerhoff & Widmann, in 1932. The construction work was conducted by Skąpski, Wolski, Wiśniewski. The building was commissioned on 8 December 1933. The port and passenger terminal were solemnly consecrated by bishop Okoniewski. The ceremony was attended by, among others, Ferdynand Zarzycki, Ministry of Industry and Trade, and ministers: Józef Beck, Emil Kaliński, Bronisław Nakoniecznikow-Klukowski, Władysław Marian Zawadzki, Kazimierz Papée and General Gustaw Orlicz-Dreszer. The terminal was a base for the transatlantic passenger carrier “G-A-L”, which handled the New York and South American lines. The structure covered an area of 2.5 thousand m2 and was equipped with all the equipment needed to load and unload passengers; it had a railway siding with tracks installed on both sides of the building, which was intended to handle emigrant traffic, and a transit warehouse. In the interwar period, the building housed Sunday services for the employees of the port and GUM in Gdynia and was used as a venue for our New Year's Eve celebrations. During World War 2, the passenger terminal was adapted for use as offices. At the beginning of the occupation of Gdynia, on 14 September 1939, Polish symbols, including relief eagles and commemorative plaques, were removed from the front façade of the terminal. On 9 October 1943, during the Allied bombing of the port, part of the passenger hall, i.e., the north-western corner and wall facing the French Quay, were destroyed. This was repaired temporarily, since it proved impossible to install reinforced structural components in the original shape and restore the original body of the building because of the destruction of the foundations of part of the building. The left upper corner of the building was not restored. The terminal hall was missing a gallery on the left side of the entrance and the asymmetry of the other elements of the décor and structure of the building. After the war, the building housed the Harbour’s Master’s Office and a postal and telegraph office, among others. At that time, the Passenger Terminal did not serve its basic function because of the political situation. Passenger traffic was resumed in the second half of the 1950s. During the 1970s, in addition to the facilities for passenger service, the building house the Department of Shipping Services of the Port of Gdynia Authority, Customs Office, Gdynia 18 Postal and Telecommunications Office, Maritime Agency Port Office, office of C. Hartwig company, and PKP’s shipping department.

Since the suspension of all transatlantic liner shipping movements by Polish ship-owners in 1987, the Passenger Terminal ceased to serve its original function and became an office building for port institutions and companies, and part of the transit warehouse started to be used as a storage facility.

Since June 2009, the building houses the office of clearance for the ferry service to Helsinki and Travemünde of Finnish shipowner Finnlines.

In the middle of 2015, the building was adapted for use as the Emigration Museum of the Passenger Terminal. The museum will assemble and present collections on the history of Polish emigration.

The Passenger Terminal in Gdynia is located at the French Quay of the Port of Gdynia, at Witolda Gombrowicza Square, in the vicinity of the office of the Harbour Master’s Office and the Monument to the People of the Sea. The building consists of two parts, is compact, and built on a rectangular floor plan. It is composed of the terminal hall and transit warehouse. The main hall called the “Passenger Hall” (situated on the west side) has three storeys; originally, it was covered with a thin-walled quadrangle reinforced concrete cupola (“Zeiss-Dywidag”) topped with a pyramidal skylight. The terminal hall housed ticket counters, information desk, postal office, luggage storage, restaurant, waiting room, and doctor’s offices. To the west, it adjoins the transit warehouse, which is a two-storey reinforced concrete frame structure. The upper storey is covered with a ten-span arched roof; originally, it was used as a hallway; the lower storey was adapted for use as a luggage storage. The front (west) façade of the terminal hall features wide windowless corners, which vertically cover two upper glazed storeys. This part of the façade is partitioned by pillars positioned between the windows and extended beyond the edge of the crowning cornice. The ground floor was horizontally separate with a massive roof and accentuated with the stairs along the whole width of the front façade. The north and south façades were originally identical, arranged horizontally in the form of three rows of narrow windows, with the ground floor separated from the upper parts by a roof over the ramps. The vertical shallow bays with masts projecting beyond the roof surface were the dominant feature of the western corners. After the damage caused during World War 2, the south-western corner was not reconstructed. The eastern part, i.e., the transit warehouse, features a clearly discernible frame structure, which can be seen in the longitudinal façades, and a row of windows under the upper ende of the ground floor storey. The face of the upper storey was set back, which allowed to create a gallery terminating in a staircase in the north-eastern corner. The interior has the form of a central hall surrounded by a gallery which can be accessed via spectacular stairs. The renovation and adaptation of the building for use as the Emigration Museum began in May 2013. The removed relief eagles were attached to the front façade. At the same time, the south-western façade underwent alterations; the existing structure was replaced with a glass pane. The alterations also involved the construction of the steel structure of a glazed tunnel running from the Transit Warehouse, which was an original viewpoint.

The site is accessible to visitors during the opening hours of the Emigration Museum.

compiled by Dorota Hryszkiewicz-Kahlau, Regional Branch of the National Heritage Board of Poland in Gdańsk, 06-11-2014.