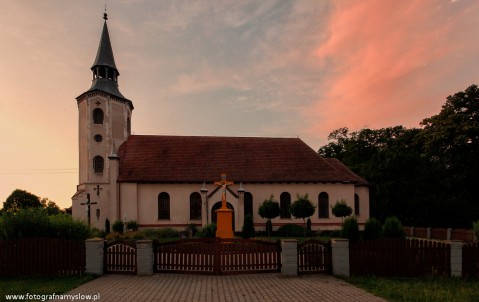 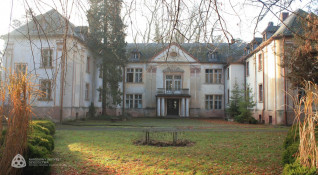 The palace complex in Starościn is an excellent example of a building intended for the eyes of guests, in which Baroque and Classicist features seamlessly flow into one another.

Starościn was mentioned in sources already in 1353. Originally, it was a summer residence of the staroste of Namysłów, and from 1533 on - the staroste of the Duchy of Wrocław. In the years 1470-1479, Henryk Jankewitz known as Kolla ordered the construction of a hunting castle in the place of an older manor house. The relics of the castle are present in the current palace. In the second half of the 16th century, Starościn was owned by Jan Stwoliński. From 1604, the estate in Starościn belonged to Conrad von Saurma and it remained in the hands of his family until World War II.

In 1604, the first re-designing of a small building incorporated in the present palace took place. In the 18th century, it was extended by the front suite of rooms from the south-west. Approx. in 1800, manor farm buildings were erected and two wings were added to the back façade of the palace. A full-scale re-designing of the palace, which made the Baroque and Classicist body more uniform, was carried out in the years 1917-1919 by order of duke Friedrich von Saurma-Sterzendorf. After 1945, the palace complex was nationalised. It housed, among other things, a school, a boarding house, and an orphanage. In 1996, the building was taken over by the commune. A culture centre was arranged in it at that time. Today, the palace remains in private hands.

The palace complex with the manor farm complex is located at the intersection of the roads running through Starościn.

The three-wing building is made of brick and stone, and plastered. It was built on a floor plan shaped as a “U” letter. Its older (front) part has one storey; it is covered with a mansard roof with dormers. The newer wings are two-storeyed and they are covered with hip roofs. The front (south-western) façade has seven axes, with an entrance in the centre over which there is a small mansard roof. From the garden, the wings embrace an open courtyard. In the central part of the garden façade, there is an entrance preceded by a colonnaded portico which supports a small balcony. By the north-western wing, an annex was built. Surviving decorations of the façades include pilaster partitions and rectangular window surrounds, as well as window surrounds with accentuated corners. Part of the window openings feature basket-handle arches in their top sections. The layout of rooms in the older part of the building is of multi-bay type, with a hall and a staircase on the axis. Side wings are of single-bay type. Most rooms are covered with ceilings. Only in one of them, probably originating from the oldest part of the building, there are surviving double barrel vaults.

The remaining elements of the complex include a devastated tomb chapel of the former owners and a Classicist outbuilding erected in approx. 1800 from brick and covered with plasterwork. Both can be found in the park. The single-storey outbuilding was erected on a rectangular floor plan and topped with a half-hip roof. The front façade is five-axial, with a recessed portico in the centre and a pair of Tuscan columns and pilasters. Over the portico, there is a small triangular pediment with a segmented window opening. The façades of the building are rusticated. The interior layout is two-bay, with a hall in the centre.

To the north-west from the palace and park complex, there was once a grange. The utility buildings were erected around a rectangular courtyard. Originally, they formed a densely built-up area. To this day, only part of them have survived, e.g. a granary.

compiled by Aleksandra Ziółkowska, Regional Branch of the National Heritage Board of Poland in Opole, 10-12-2015. 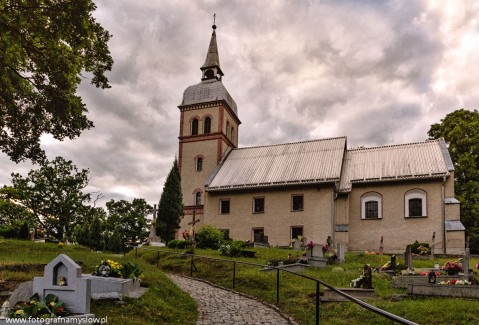 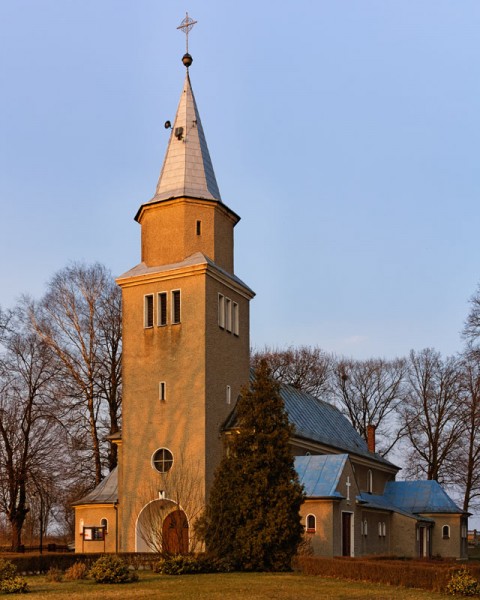 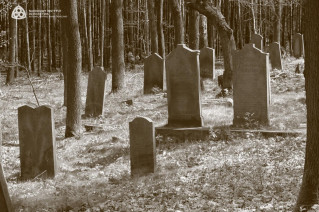 The Jewish cemetery in Miejsce is one of the most important places connected with the modern history of Upper Silesian Jews. The oldest known tombstones date from the 18th century: two from the 1770s, one from the 1780s, and six from the 1790s.

The presence of the Jews in Miejsce near Namysłów dates from the 1650s and is related to the Jewish settlement under the terms of the Treaty of Westphalia (1648), i.e., with the consent of landowners. Over time, the local Jewish community was growing (for example, 6 families known by surnames in 1737, 26 persons in 1757). Services and education were held probably in one of the private houses. The synagogue featuring a wooden structure was built around 1780.

The status of the commune increased significantly in 1781. Since 8 August, Jews were no longer legally able to settle in the village. Frederick II excluded only the following four villages in Upper Silesia from the provisions of the relevant edict: Cieszowa near Lubliniec, Wielowieś near Sulęcin, Krasków near Kluczbork, and Miejsce. At that time, the Jewish minority exceeded 150 people and had its own qahal and, as it may be assumed, necropolis. In the first half of the 19th century, the followers of Judaism accounted for 30% of the village's inhabitants (more than 240 people in the 1840s). The only rabbit of the commune was David Lazarus Laqueur (1772-1836). A new masonry synagogue was built on the corner of Wojska Polskiego and Dubois Streets in 1852-1856; the former synagogue was certainly no longer sufficient. After World War 2, it was adapted for use as a gymnasium.

The present cemetery between Miejsce and Namysłów operated from 1771/1772; the oldest documented matzevah dates to that time. However, as was the case with other cemeteries, the Jewish community in Miejsce officially acquired that area only on 17.08.1787, thus legalising the existing state. Soon, in 1791, the cemetery was expanded. Probably from the beginning the Jewish cemetery was fenced. The brick wall by which the area was enclosed is only known from descriptions and photographs from the 1930s. The pre-burial house has not survived as well.

In the second half of the 19th century, when a number of civic rights were granted (or restored) to Jews, including the freedom of settlement and access to professions hitherto not open to Jews, Jews were increasingly emigrating to developed towns, where new opportunities were opened for them. In 1872, the commune in Miejsce co-founded the emerging Association of Upper Silesian Synagogue Communes (Oberschlesische Synagogen-Gemeinde), but soon the numerous Jewish community in Miejsce decreased so that it was included in the Namysłów commune in 1890.

In the 1920s, when the qahal in Miejsce was finally liquidated, the Jewish cemetery was taken over by the Namysłów commune. The last burial was recorded in 1937. Some tombstones were destroyed in 1945. After the war, the fence was dismantled, and many tombstones were stolen. Brick and stone slabs were used as building material.

The cemetery is located on the south-western edge of the forest, on a hill on the east side of the road from Miejsce to Namysłów. It covers an area of 0.78 ha. It can be accessed from a dirt road. The cemetery is not fenced, the entrance is marked by two boulders. The necropolis no clear layout.

Over 230 tombstones in the form of stelae, mainly made of sandstone, have been preserved. Many of them are overturned or have been partially preserved. Archival photographs show that in addition to stone slabs, wooden and painted matzevot were erected. Traces of painted decorations are also visible on the preserved stone matzevot.

The earliest matzevah known from a photograph was from 1771 and was made of oak wood; the archival photograph of it is in the Jewish Museum Frankfurt am Main. Three other wooden matzevot are known from photographs. The preserved tombstones are made of sandstone and limestone, have the form of stelae with straight, triangular, or arched top sections. In addition to single stelae, there are also a few double stelae. The epitaphs are in the Hebrew, German, or both languages. There are also instances where German inscriptions includes dates according to the Jewish calendar, for example the inscription on the tombstone of Isaack Tockus. The inscriptions are on one side or on two sides (in such a case, the inscription to the east is in Hebrew, and the one to the west is in German).

Among the tombstones, there is a matzevah of the only rabbi of the commune in Miejsce.

The Jewish cemetery is not fences; there is also no pre-burial house. A plaque bearing the basic information about the cemetery was installed at the entrance in 2010. For a few years, the necropolis has been under the supervision of the students of the Agricultural School Complex in Namysłów.

The site is open to the public.

compiled by Joanna Szot, Regional Branch of the National Heritage Board of Poland in Opole, 02-09-2014. 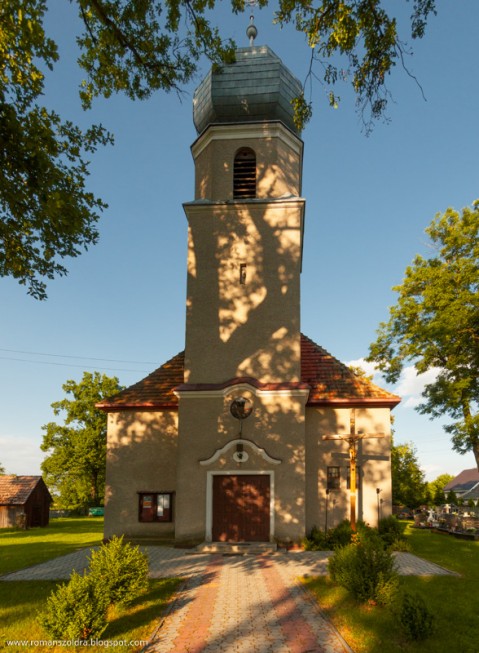 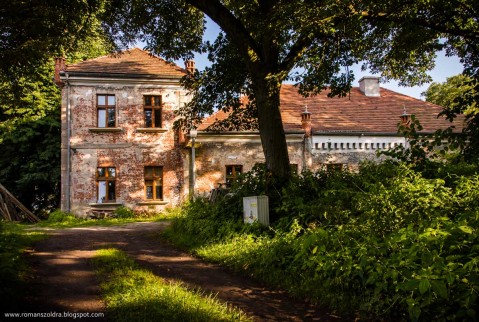 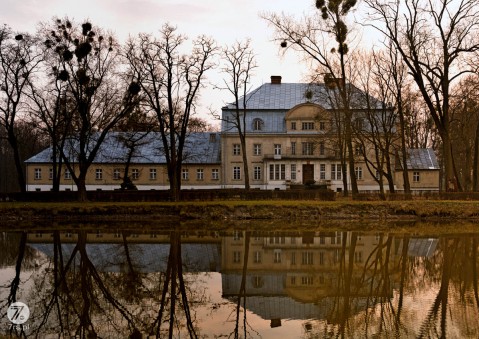 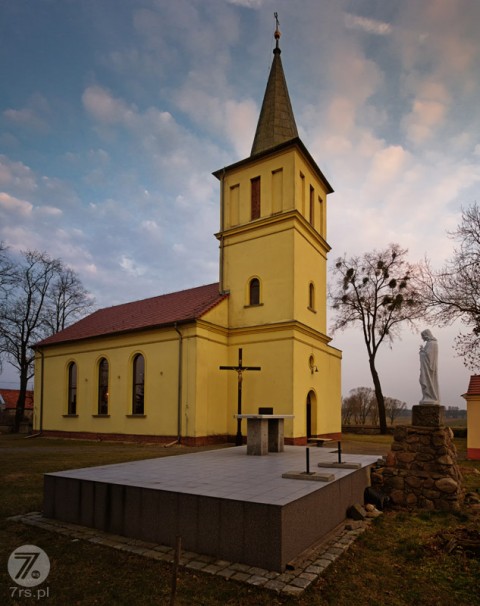