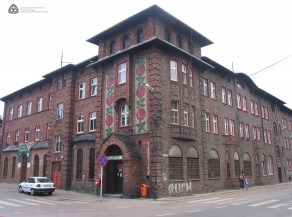 Works of art by Silesian painters, sometimes referred to as naïve art, depict fantastic creatures wandering through phantasmagorical forests growing on coal heaps, beautiful naked girls (as beautiful as Wichta in Kazimierz Kutz’s film) posing in a coal mining landscape, old men seated outside brick-built houses, rows of workers’ tenements, their uniformity broken by lines of drying clothes and colourful flowers growing in pots. Families sit at tables and colliery orchestras perform, all set against the backdrop of Szopienice or Nikiszowiec.

The Nikiszowiec settlement was built on the outskirts of Katowice between 1908 and 1912 for workers from the Giesche colliery, taking its name from the mine’s Nickisch Shaft. In time it became an icon of industrialisation, the jewel in the crown of Upper Silesia. It was designed for the Bergwerkgesellschaft Georg von Giesches Erben company by the architects Emil and Georg Zillmann, and was part of the popular early 20th-century movement which saw industrialists build model villages for their workers. The villages were built near large factories and plants in order to retain qualified workers, for example, by offering attractive forms of payment, and providing a wide range of services, education and healthcare. In 1904 standards of hygiene and sanitation improved markedly, enforced by the Prussian Settlement and Buildings Act, which made it compulsory to provide residents with potable water, and install lighting and waste removal systems. The first residential block in Nikiszowiec was put in use in 1911. A total of some 1000 residences were built, a park (4.4 hectares), an administrative building, an assembly room, a bath-house with boiler room, a hostel, an inn, a police station, shops, a laundry, and a school with accommodation for teachers. A standard residential tenement consisted of 165 flats; together with the courtyard and street it occupied an average of 1300 m2. A typical flat of c. 63 m2 comprised two rooms and a kitchen. In 1914 work began on the construction of a Neo-Baroque church in the central square. The church was also designed by the Zillmanns. Grievous changes were made in the 1970s by dismantling outbuildings which were neatly arranged in the inner courtyards of each block and provided evidence of the residents’ way of life. Several buildings were also remodelled or altered in function.

Nikiszowiec is of particular significance because of its excellent state of preservation, retaining its original compositional integrity, its architectural homogeneity and rich array of social amenities and services. Nikiszowiec aspired to be an ideal village. Its clearly defined, enclosed layout represents an interesting concept based on division into various functional zones and on providing tenements, which were usually of modest form, with attractive architectural designs. The architects introduced subtle details to distinguish the almost identical buildings. Monotonous stretches of brick façade were broken up by adding shallow bay windows of various shape, appealing glazed facing tiles, decorative motifs laid in brick, and by painting the window frames red (these were regularly repainted by the tenants). Nikiszowiec also has distinctive arcades built over its streets, linking individual buildings to one another.

The famous naïve artist Ewald Sówka believed that the layout of Nikiszowiec was a mirror image of the mine’s underground layout - the other side of the Silesian mirror. However, it is also a symbol of hope for other mining villages, demolished or left to suffer the destructive effects of time and poverty. 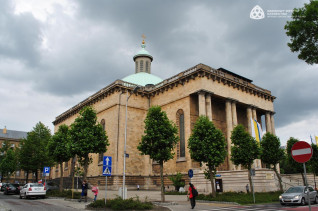 The cathedral of Christ the King
Katowice

The archcathedral of Christ the King in Katowice presents an immense historical value, enjoying the status of a regional monument as well as an important religious and national symbol. It was erected in the territory reclaimed by the Polish state in 1922, following the so-called Silesian plebiscite. In addition, it is one of Poland’s largest cathedrals and the only cathedral erected in the 20th century, based on a design chosen in the course of one of the most important design competitions in the post-war history of Poland.

Following the decree of November 27, 1923, the Apostolic Administration of Polish Silesia was established in Katowice, its jurisdiction extending to the territories incorporated into the Polish territory as a result of the Silesian plebiscite. In accordance with the papal bull issued by pope Pius XI on October 28, 1925, a new diocese was established in Katowice, led by bishop August Hlond. Back in 1924, the ecclesiastical authorities have purchased the land necessary to begin the construction of the building of the diocese curia and the cathedral; one year later, a nationwide design contest was announced.

During the first round of the competition, a total of 37 proposals were submitted; on April 19, the first round ended without a winner being announced, which led the commission to conduct a second round of the competition among the participants of the first round. Due to the objections raised, however, in the end one of the existing designs was chosen - a concept for a cathedral produced by Zygmunt Gawlik, who had been given an honorary mention during the first round. The author of the design was asked to introduce certain changes to his design as well as to engage in cooperation with a more experienced architect, the latter request being made on account of the young age of the winning designer. In the end, the design accepted for implementation was the collaborative effort between Zygmunt Gawlik and Franciszek Mączyński, with the task of designing the sculptural decorations of the façades being entrusted to Xawery Dunikowski. The construction of the cathedral of Christ the King began on June 5, 1927; until the new edifice was completed, the function of the cathedral was performed by the church of St Peter and Paul on Mikołowska street. In 1927, the site preparation was completed, followed by the works on the building’s foundations two years later. The first suspension of the project occurred in 1929, due to the severe economic crisis and the accompanying political turmoil. As a result, the construction works were now carried out in stages.

Since the ecclesiastical authorities have found it difficult to implement both projects - the cathedral and the diocese curia building - at the same time, the latter project was given priority status, allowing the works to be completed in 1939. In the 1930s and 1940s a number of works - both major and minor - were conducted on the site of the cathedral, including the construction of the crypt, the pillars supporting the dome as well as the chancel, which was finally consecrated on June 6, 1938. The works were completed in 1954. However, the immense delays have led to some unfavourable changes, such as the redesign of the dome coupled with a reduction in height - a decision reached under political pressure - or the complete omission of exterior sculptural decorations included in the design, brought about by the shortage of funds. In 1973, the interior of the cathedral was completed, based on the design of M. Król; the bronze sculpture of Christ the King in the chancel was created by J. Kwiatkowski, while the sculpture of St Barbara - the patron saint of miners - was the work of G. Grzywaczyk.

The archcathedral of Christ the King is situated in the Katowice city centre, at 49 Plebiscytowa street. The edifice is situated on a small hill and is slightly receded vis-à-vis the street which its front façade faces. Along with the rectory and the metropolitan curia building located to the south, the cathedral forms a tightly clustered complex of buildings.

The Classicist church, designed by Zygmunt Gawlik and Franciszek Mączyński, was designed on a square floor plan and is preceded by a rectangular porch adjoining the northern façade thereof, featuring a monumental portico with four pairs of columns. The southern façade, on the other hand, features a semi-circular apse. The southern side of the building is also adjoined by the catechetical house and the sacristy. The interior is arranged around a central octagonal section, surrounded by four chapels located in the corners of the main body of the cathedral. Other important features are the two axially positioned side porches in the southern part of the chancel as well as the main entrance in the northern part of the building. The compact, two-storey silhouette is accentuated by a tall, rusticated socle as well as by a simple roof parapet taking the form of a balustrade, above which rises the monumental dome with roof lantern positioned in the centre of the structure, resting atop a low tholobate pierced with rectangular windows. Another notable feature is the crypt, designed on a circular plan and featuring a complex of concentric reinforced concrete supports designed to withstand the immense weight of the vaulted ceiling above. East of the crypt lies the bishops’ mausoleum. The interior was designed in the Art Deco style, with the main altarpiece being adorned with bas-reliefs incorporating the motif of the Last Supper and the Wedding at Cana, designed by Jerzy Egon Kwiatkowski. Other notable features include the sculpture of Jesus Christ, King of the Universe, suspended above the main altarpiece, as well as numerous stained glass windows.

The building is open to the general public.

compiled by Agata Mucha, Regional Branch of the National Heritage Board of Poland in Katowice, 23-10-2014. 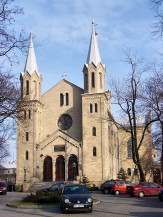